USD/CAD: Traders Should Prepare For Movement

The Canadian dollar has inched higher in the Friday session. Currently, is trading at 1.3124, down 0.14% on the day. On the release front, the focus will be on employment indicators on both sides of the border. In Canada, was expected to post a small gain of 5,100 and is forecast to dip to 61.5 points. Over in the U.S., are expected to rise to 193,000, and Average Hourly Earnings is forecast to tick lower to 0.2%. Traders should be prepared for some movement from USD/CAD during the North American session.

There were no surprises on Wednesday as the Bank of Canada stayed on the sidelines and maintained the benchmark rate at 1.50%. The bank raised rates by a quarter-point in July and has hiked rates four times since last summer. The bank stated in its rate announcement that policymakers would be “monitoring closely the course of the NAFTA negotiations and other trade policy developments, and their impact on the inflation outlook.” With the Canadian economy performing well and the Fed likely raising rates later this month, there is pressure on the BoC to again raise rates in 2018. However, concerns over NAFTA and global trade tensions have won the day for now, as the BoC took a pass on a rate hike.

The global trade war has spooked investors and weighed on risk currencies such as the Canadian dollar. The U.S.-China trade spat has been in the headlines for months, with the U.S. slapping tariffs on China and the latter responding in kind. Will President Donald Trump ratchet up the trade war between the world’s two largest economies? Trump has threatened to impose tariffs on $200 billion worth of Chinese tariffs, and the time period for public consultations ended on Thursday, which means that Trump is free to announce another round of tariffs at any time. The U.S. dollar has benefited from the global trade war, and further tariffs against China could spell more headwinds for the wobbly Canadian dollar. 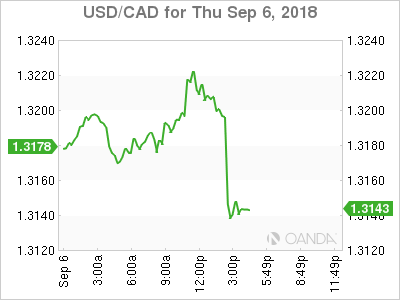 In the Asian session, USD/CAD ticked higher but then reversed directions and posted losses. The pair has been flat in the European session