The Canadian dollar is unchanged in the Monday session. Currently, is trading at 1.3014, down 0.05% on the day. On the release front, U.S. retail sales were much softer than expected. posted a meager gain of 0.1%, shy of the estimate of 0.4%. surprised with a decline of 0.1%, compared with an estimate of 0.4%. This marked the first decline since June 2017. Later in the day, the U.S. Treasury is expected to release the semi-annual currency report. In Canada, the sole event is the .

Investors are keeping a close eye on the U.S. Treasury’s currency report, which will be published later in the day. In the last report, the U.S. did not name any of its major partners as currency manipulators, but it did criticize China for the “non-market direction” of its economy. Since then, the Trump administration has imposed some $200 billion in tariffs on Chinese goods. China has retaliated with its own tariffs on U.S. goods, and there has been speculation that China could respond to the U.S. tariffs by devaluating the Chinese yuan, in order to bolster Chinese exports. In 2015 and 2016, the markets dropped sharply on fears that China would implement a major devaluation of its currency. The report should be treated as a market-mover.

With the U.S. economy continuing to post strong numbers, the Federal Reserve is on track to raise rates in December. This would be the fourth rate hike in 2018, and the markets are expecting three more hikes in 2019. Not surprisingly, this has put pressure on the Bank of Canada to raise rates as well. The Canadian economy is in good shape, but not nearly as strong as its southern neighbor. The Bank of Canada holds its next policy meeting on Oct. 24, and the strength of key Canadian releases will be a major factor as to whether policy-makers raise rates. 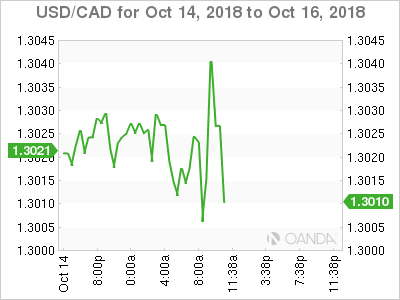 USD/CAD wa in the Asian and European sessions