It has been an uneventful week for the Canadian dollar, and the trend has continued on Thursday. Currently, is trading at 1.2958, up 0.11% on the day. On the release front, the U.S. unemployment claims is expected to edge up to 223,000. The Bank of Canada will release its semi-annual Financial System Review, followed by a press conference with BoC Governor Stephen Poloz. Ontario is holding a provincial election, with the Conservatives expected to form a majority government. On Friday, Canada releases and the . As well, G7 leaders are meeting in Quebec for their annual summit.

All eyes are on the Ontario provincial election on Thursday. Just hours before poll stations opening, the election remains too close to call. Polls are showing the Conservatives with a slender majority in the popular vote over the left-wing NDP, with the governing Liberals trailing far behind. However, the Conservatives are expected to win most of the electoral districts (ridings), and the latest polls are showing a whopping 87% likelihood that they will form a majority government. The actual results will largely depend on voter turnout and regional dynamics. A Conservative majority will likely boost the Canadian dollar, but a minority government or an NDP win would likely send the loonie sharply lower.

Meetings between G7 leaders are often a chance to catch up with friends and hold a photo-op, but this year’s summit could be explosive, with plenty of bad will between six of the members and U.S. President Donald Trump. The reason? The renewal of the tariff spat, courtesy of the U.S. slapping aluminum and steel tariffs on the European Union and Canada. Last week, finance ministers from six members of the G7 were united in their criticism of U.S. Treasury Secretary Steve Mnuchin over the brewing trade war. Will we see a higher profile, repeat performance at this meeting? Canada and Mexico have already announced retaliatory duties on U.S. products. The escalating trade battle is sure to dominate the summit, and if the leaders fail to resolve matters, the result could be a nasty trade war between the U.S. and its major trading partners. 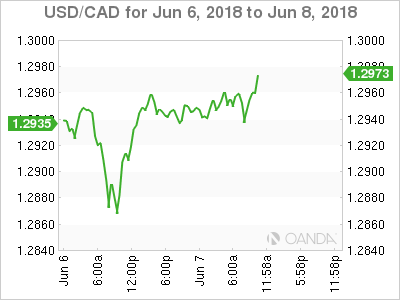