The Canadian dollar has ticked higher in the Tuesday session, after considerable losses on Monday. Currently, is trading at 1.3384, down 0.11% on the day. On the release front, there are no Canadian events. The U.S. releases key inflation reports, starting with on Tuesday and on Wednesday.

A bit of positive news on the trade-war front was enough to spark a rally on global equity markets. Following reports on Tuesday that U.S. and Chinese negotiators had spoken by phone, investor risk appetite jumped higher, sending Asian and European stock markets sharply higher. Will the spike in risk appetite boost the Canadian dollar? Canada stands to gain from a respite in the U.S.-China trade dispute, which has taken a toll on Canadian exports, a critical driver of economic growth.

Canadian employment numbers sparkled in December, but that will not be enough to revise current monetary policy. The Bank of Canada is in caution mode, and a recent decline in has solidified that stance. The bank remained on the sidelines at its policy meeting last week, and is expected to stand pat again in January. With the Fed expected to scale back its “gradual rate hike” policy to just one hike next year, there is less pressure on the BoC to raise rates. The Fed is widely expected to raise rates at next week’s meeting, which would be the fourth rate increase this year. The rate hikes have slowed economic growth, as seen by lower GDP readings and a dismal for November. 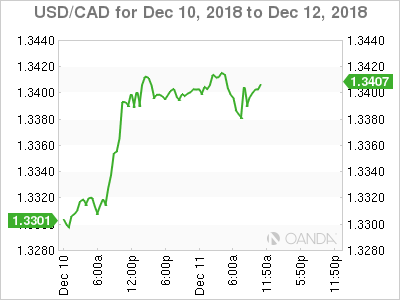 In the Asian session, USD/CAD was mostly flat. In European trade, the pair ticked higher but has reversed directions and posted losses