The Canadian dollar has posted considerable losses in the Tuesday session. Currently, is trading at 1.3273, up 0.54% on the day. On the release front, there are Canadian events on the schedule. In the U.S. construction data was mixed. dropped to 1.30 million, shy of the estimate of 1.35 million. This marked a 3-month low. improved to 1.35 million, beating the estimate of 1.31 million. On Wednesday, Federal Reserve Chair Jerome Powell will participate in a panel at the European Forum in Sintra, Portugal. The U.S. will release .

Are we heading for a global trade war? Investors are nervous, and softer risk appetite has weighed on the Canadian dollar. The Canadian dollar is currently trading at its lowest level since June 2017. The most recent round of the trade spat between China and the U.S. started on Friday, when the U.S. announced a 25-percent tariff on $50 billion in Chinese goods. After China responded with an identical move on U.S. imports, U.S. President Donald Trump has now threatened to impose 10-percent tariffs on some $200 billion in Chinese goods. Not surprisingly, China has threatened to retaliate to this latest move. Trump has vowed to take action on the $375-billion trade deficit that the U.S. has with China, claiming that the latter is guilty of unfair trade practices. With the first of the U.S. tariffs scheduled to take effect on July 6 and no signs that either side will blink first, the Canadian dollar could be sailing into nasty headwinds.

With Trump making good on his threat to slap tariffs on his trading partners, the Canadian government is scrambling to protect the economy. Trump has said the U.S. could impose tariffs of 25 percent on Canadian-built vehicles, which would be disastrous for the Canadian automotive sector, which is worth some C$80 billion to the economy every year. The Trudeau government has promised to help sectors hit with U.S. tariffs, but bailing out the auto industry would cost billions. Canada may have to provide the U.S. with more concessions in the NAFTA negotiations, in order to stave off tariffs against Canadian vehicles, which could have a disastrous effect on economic growth. 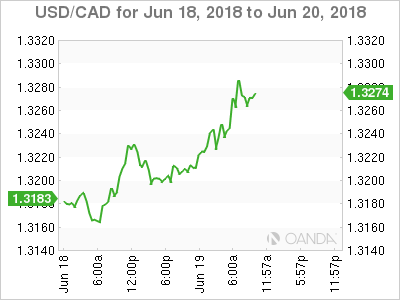 In the Asian session, USD/CAD inched higher and has posted more gains in European trade. The pair is steady in the North American session.