Join our analysts during their Live Webinars. They can offer insight on economic indicators like today’s surprise rise in consumer confidence.

August’s survey of consumer confidence delivered a substantial beat Tuesday morning, stalling a dollar downtrend. The headline figure came in at 133.4, the highest level since October of 2000. The reading is higher than the forecasted 126.6 and last month’s 127.9. As a decline was forecasted, any surprise to the upside would have been notable but such a gap higher was enough to have a palpable impact on the dollar basket.

Despite the increased costs, consumers seem to be willing to make big-ticket purchases. This may in-part be from the decline in inflation expectations. Last month, 5.0% inflation was expected over the next 12-months while this month’s survey reported 4.8%. 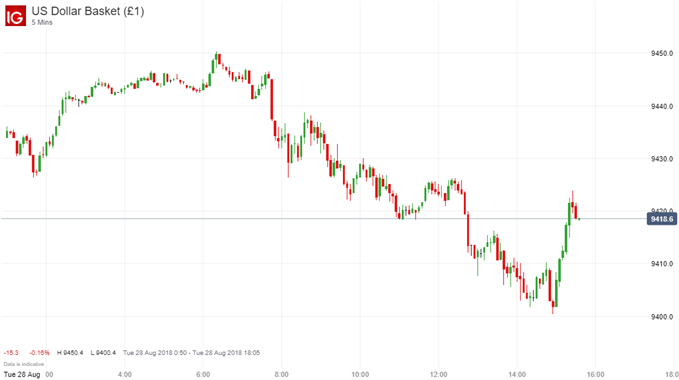 Although August is considered to be the height of the summer doldrums, equities continue to produce impressive results. Similarly, the strong consumer confidence reading was enough to stall a downtrend in the dollar basket, allowing bulls to take over momentarily in the morning hours. DXY climbed from roughly 94.02 to 94.20. While still quite small, the impact is larger than recent consumer confidence related moves and the reading will likely weigh on investor’s perception of the US economy.