I am riding the long (DXY) trade based on two simple drivers: 1) a U.S. Federal Reserve pacing for in 2018, and 2) an expanding trade war, especially against China, which on balance will create more demand for U.S. dollars especially relative to those currencies who stand to lose business with the U.S.

However, there was a week from June 29th to July 6th where my confidence in the trade wavered. The U.S. dollar index suffered two steep losses during that period in a pattern that had echoes of a toppy trading action. On July 6th The stock market responded positively to the June U.S. jobs report at the same time the U.S. dollar weakened further. I expected the dollar to move higher on a strong jobs report. At the time, the odds for a fourth rate hike for December climbed back over the important 50% threshold – meaning the odds were more likely than not. According to the CME FedWatch Tool, the odds for the Fed to hike rates a fourth time in 2018 by December (assuming hikes 25 basis points at a time) climbed from 45.6% on June 29, 2018 to 52.2% on Friday, July 6th. Recall that the Fed has hiked rates twice so far this year; the odds for a third rate hike were over 80% for September and over 90% for December (per the chart below). 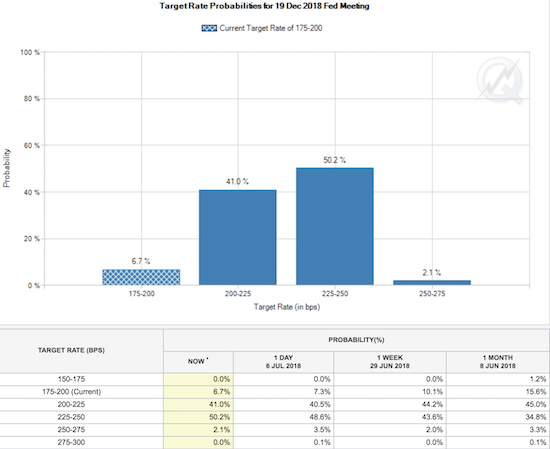 The odds for a fourth rate for 2018 crept over 50% as another strong jobs report reminded the market that the Fed needs to keep pushing rates higher.

Friday, July 6th was also the date the U.S. kicked off tariffs against Chinese exports. From CNBC:

“Trump moved forward with the first tranche on Friday, putting U.S. tariffs on $34 billion worth of Chinese goods. China retaliated in kind, placing tariffs on $34 billion of soybeans, pork and electric vehicles from the U.S. Trump is preparing to respond with an additional list of $200 billion worth of Chinese goods targeted for tariffs, which he had U.S. officials draw up.”

A trade war that dampens the demand for foreign goods in the U.S. will, all else being equal, lower the supply of dollars flowing out into the global economy. Lower supply should tend to put upward pressure on the dollar. Of course, if demand for U.S. goods, and thus U.S. dollars, also plummets, everything could be a wash. However, given the U.S. is the country running a large trade deficit, the balance of force favors a lower supply of U.S. dollars and a higher relative price for those dollars.

The U.S. dollar index bounced off support at its 50-day moving average (DMA) the next trading day (July 9th) and has yet to trade lower since. Now, fast-forward to today (August 1, 2018) two days ahead of the U.S. jobs report for July.

The U.S. Federal Reserve issued just about the blandest report possible in announcing no change to rates or policy.

The press release contained no new information. Bond yields increased ahead of the meeting and floated lower until the announcement was released. The 5-minute view of iShares 20+ Year Treasury Bond ETF (NASDAQ:) confirms that the Fed’s direct effect was a small boost in yields (drop in TLT). The daily view of TLT shows a a gap down that confirmed the earlier breakdown below support at the 50-day moving average (DMA). Of course, TLT has experienced multiple 50DMA breakdowns this year. 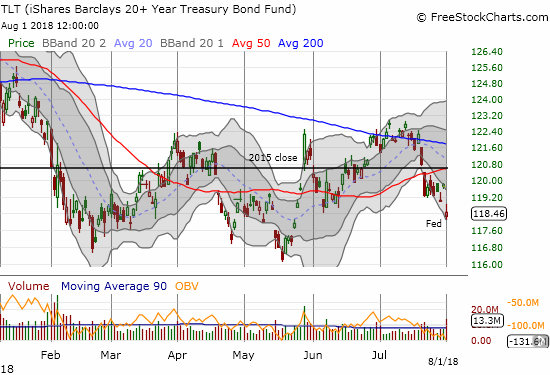 The iShares 20+ Year Treasury Bond ETF (TLT) confirmed another 50DMA breakdown with a gap down and 0.6% loss. 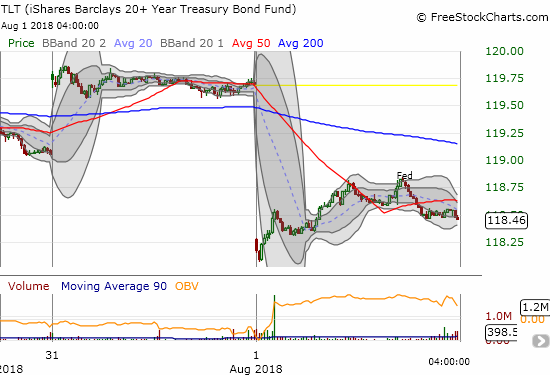 The market anticipated the Fed’s commitment to hiking rates, wavered, and then responded to the Fed’s actual statement that confirmed a hike commitment.

While rates increased, the U.S. dollar index (DXY) bounced “lightly” off its 50DMA support. The dollar has had a slight upward bias defined by the uptrending 50DMA, but the currency has been effectively trapped in a trading range since a one-day surge on June 14th to a marginal 7-month high. That was the day Mario Draghi, the head of the European Central Bank (ECB), surprised currency markets by announcing that the ECB pushed out its rate policy to September, 2019 and further if needed. The (FXE) plunged that day and boosted the U.S. dollar index (about 52% of the index is valued from the euro). 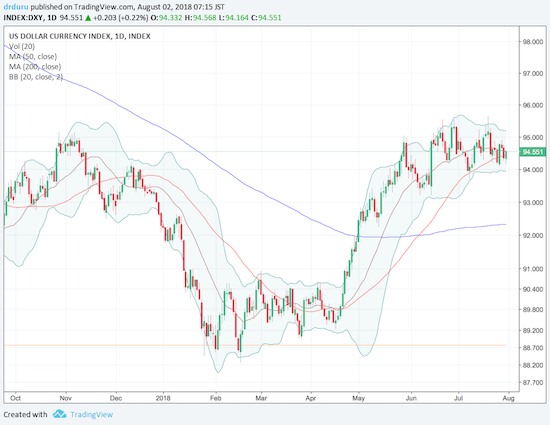 The U.S. dollar index is idling in a trading range mostly above its 50DMA support.

I am surprised the U.S. dollar continues to idle even as the odds for two more rate hikes in 2018 steadily creep higher. So, I am guessing the U.S. dollar trade is now a waiting game for a fresh catalyst. In the meantime, I look for dollar weakness in various currency pairs to trade the range (the latest such move was going long – the Japanese yen dropped sharply in the wake of the Bank of Japan’s stubborn adherence to its ultra-low rate policy stance). As I cycle through dollar trades, I primarily focus on currencies with lower or equivalent interest rates. 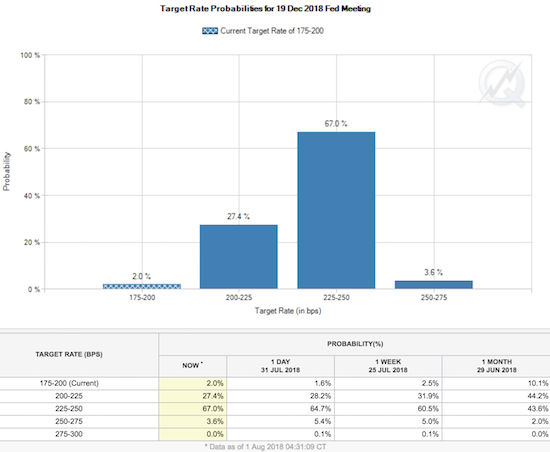 The Odds For A Fourth Rate Hike

Also on thus day, President Trump announced that he is ready to increase a proposed 10% tariff on $200B of Chinese goods to 25%. While this announcement looks just like the fresh catalyst the dollar needs to go higher, I suspect currency markets will patiently wait to see the tariffs actually go into effect and perhaps even wait to see their impact. In other words, the waiting game could continue for months more.

Having said all that, there is one currency (re)proving its mettle over the U.S. dollar that keeps my attention: the Mexican peso. soared ahead of Mexico’s presidential election. The currency pair reached a peak two weeks ahead of the election. There was a wild swing up and then back down in response to the overwhelming election of populist Andres Manuel Lopez Obrador, aka “AMLO.” I took profits on my short on USD/MXN shortly after the election and have been amazed at the on-going strength in the peso (weakness in USD/MXN). 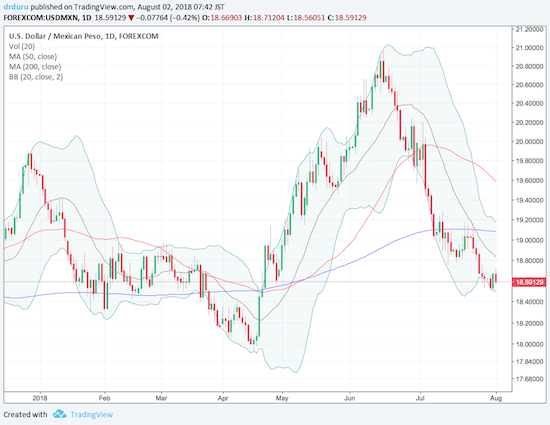 The Mexican Peso Has Almost Completed

The Mexican peso has almost completed a roundtrip against the U.S. dollar off the April low for USD/MXN.

The peso still looks like a good candidate for hedging against my broad dollar bullishness. I am trying to wait for a USD/MXN rally back to or around 200DMA resistance before re-establishing a short position.