The Swedish Krona may feel some pain tomorrow if year-on-year retail sales data falls short of the 1.2 percent forecast. This comes shortly after Sweden’s unemployment rate was 0.2% higher than forecasts had outlined. USD/SEK jumped and broke through the 9.0327 resistance and closed at 9.0684, an increase of almost one percent. 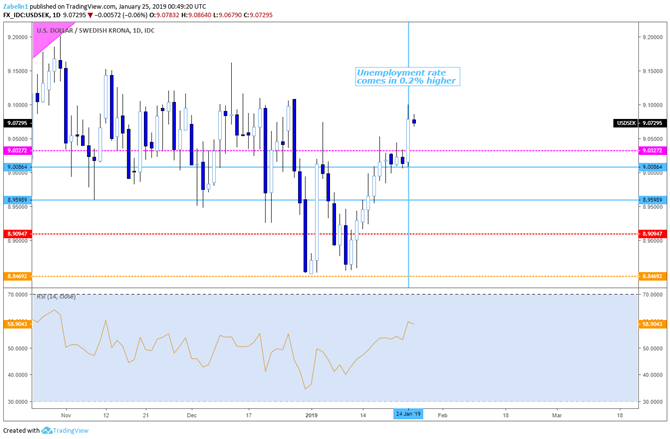 This suggests that retail sales may fall short of expectations given that consumption may be reduced. This would likely be interpreted by markets as a confirmation of the Riksbank’s forecasts of a slowdown in economic activity. The risks and likely causes were outlined in the central bank’s meeting minutes.

This comes only shortly after Sweden managed to end its unprecedented political gridlock with the re-election of Social Democrats leader Stefan Lofven. The crisis offered investors a glimpse into what may become a European-wide phenomenon after the European Parliamentary elections in May.

Looking ahead, a cascade of European economic data is set to be released next week that may shift the Krona and other Nordic assets. If the data undershoots forecasts, it will likely be viewed as a confirmation of slower growth and may negatively impact Sweden’s export-driven economy. This will come after ECB President Mario Draghi said in a press conference today that the risks to the outlook have moved to the downside.