Check out our Third Quarter Forecasts for Currencies, Commodities and Equities to Enhance Your Trading Opportunities!

The ongoing trade wars likely had a part to play in the United States’ most recent trade report – for June. With exports slipping, the advanced goods trade deficit grew to -$68.3 billion, surpassing the estimated -$67 billion forecast and growing from last month’s reading of -$64.8 billion. Although May offered a strong figure, no trend was able to materialize as exports slowed in June to $141.9 billion, $2.2 billion less than the previous month. Imports for this update registered at $210.3 billion, up $1.3 billion in the month.

To learn about the history of trade wars, read the Brief History of Trade Wars.

It is likely that the trade balance was at least in part influenced by retaliatory actions taken by nations responding to the US steel and aluminum tariffs. The steady pressure may cool however in upcoming months following yesterday’s progress as the European Union and the US were able to come to an agreement on trade. The agreement released significant threat to key auto industry shipments (not to mention he list of items being drafted as retaliation targets); and if realized, the EU has committed to increase soybean consumption almost immediately. Increased soybean exports could have a substantive impact on the balance, reviving exports after China dialed back purchase of that US crop.

Although the data carried a bearish connotation for markets and the dollar, markets were seemingly unfazed by the update. Instead, markets looked to the ECB rate decision, trade talks at the WTO, negative earnings from Facebook, potential tariffs on Turkey, and anticipation of Amazon earnings after the bell. The dollar basket climbed roughly 0.5% in morning hours and US equities were largely mixed but the S&P 500 posted some early growth. The Dow jumped to fresh highs. 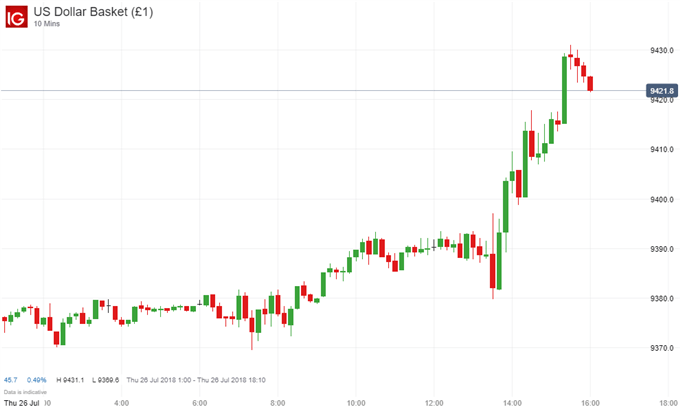