The Canadian dollar is unchanged in the Tuesday session. Currently, is trading at 1.3083, up 0.04% on the day. On the release front, Canadian is expected to improve to 0.1%. For a second straight day, there are no U.S. indicators. On Wednesday, the Federal Reserve will set the benchmark interest rate and release a rate statement.

The Canadian dollar is steady, after enduring a dismal week. The currency suffered its worst week since May 2016, sliding 2.7 percent. The week ended on a sour note, as Canadian Manufacturing Sales declined for the third time in four months. The key indicator declined 1.0%, missing the estimate of -0.8%. USD/CAD pushed above the 1.31 level on Monday, for the first time since June.

With the Federal Reserve widely expected to raise rates on Wednesday to a range of between 1.50% and 1.75%, the Canadian dollar could face strong pressure. According to the CME Group (NASDAQ:), the odds of a quarter-point raise stand at an impressive 94 percent. What can we expect from the Fed during the year? The current Fed projection remains at three hikes, but a robust U.S. economy has raised speculation that the Fed could accelerate the pace to four hikes, which would be good news for the U..S dollar. Investors will be keeping a close eye on key U.S. data, especially upcoming inflation indicators. If these numbers improve, we’re likely to see four rate hikes in 2018.

Canadian policy-makers continue to cast a nervous eye towards the Trump White House. The latest worry is the steel tariffs that the U.S. has imposed, with the European Union threatening to retaliate against a host of U.S. products. Although Canada was exempted from the tariffs, this could prove temporary, and the threat of a global trade war is not good news for Canada. Added to this mix is rising uncertainty over the NAFTA agreement. The U.S. is demanding far-reaching concessions from Canada and Mexico, and the protectionist Trump administration could decide to exit NAFTA, which has been a key driver of economic growth for Canada. With the Federal Reserve expected to raise rates at least three times in 2018, the fragile Canadian dollar could find itself mired in more headwinds. 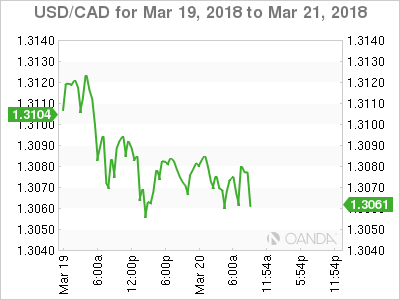 USD/CAD has been flat in the Asian and European sessions

USD/CAD ratio is showing little movement in the Tuesday session. Currently, short positions have a majority (66%), indicative of USD/CAD breaking out and continuing to move lower.