The world’s largest retailer reported fourth quarter earnings Tuesday morning and delivered a beat in both the revenue and earnings categories. Revenue read $138.8 billion versus the expected $138.76 billion. Earnings on this revenue totaled $1.41 per share, comfortably higher than the $1.33 analysts looked for.

Comparatively, sales jumped 4.2% during the quarter, notably higher than 2.6% a year ago and analyst expectations of 3.2%. The results spurred shares higher, up roughly 4% shortly after release before surrendering some gains at the open. 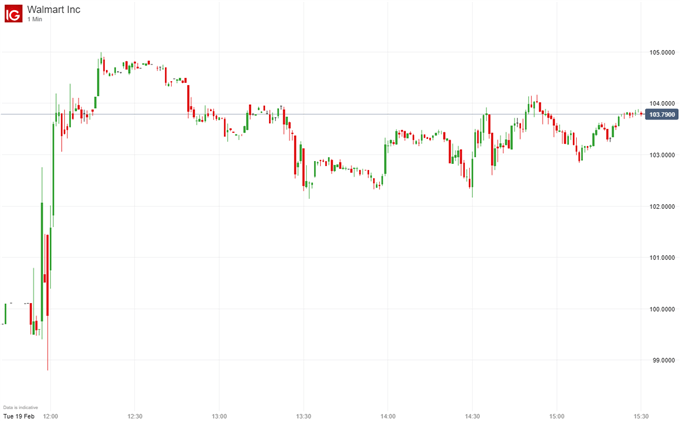 While the topline data was robust, traders particularly interested in Walmart likely looked to more specific data pieces like online sales growth. The metric has been widely watched as a barometer of Walmart’s performance versus retail-rival Amazon. On that front, Walmart’s e-commerce sales jumped 43% in the United States year-over-year for the quarter. CEO Doug McMillon heralded notable success in the company’s grocery pick-up and delivery option. The retailer hopes to expand to these options by 2020, with over 3,100 of 4,700 locations servicing grocery pick-up. 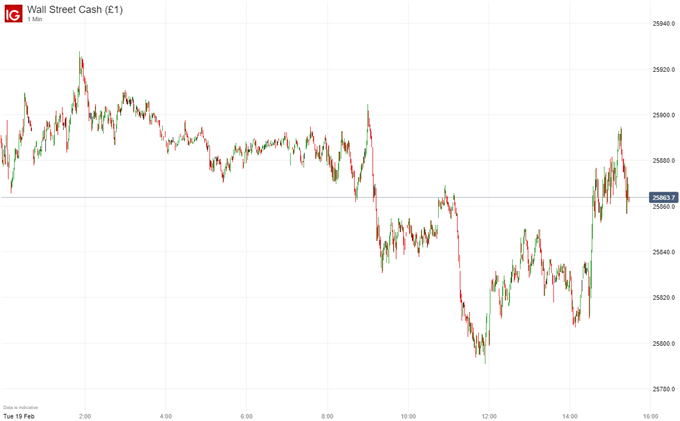 Learn to day-trade the Dow Jones.

Walmart’s strong performance helped to buoy the Dow Jones which came under early pressure Tuesday after markets were closed Monday for the President’s Day holiday. The retailer makes up roughly 2.6% of the Industrial Average and counteracted poor performances from other members. At the time this article was published, the index traded virtually unchanged despite notable losses in the hours before the open.

The poor figures were questioned by some as a possible “glitch” due to the partial government shutdown while others believed the figures to mark the advent of a downturn. Either way, Walmart’s performance proves at least the world’s largest retailer did its part this holiday season which could suggest weakness in other retailers still to report. For more on this, follow @PeterHanksFX on Twitter for insight and updates on the equity space for DailyFX.