Updates to New Zealand Gross Domestic Product (GDP) report may fuel the recent decline in NZD/USD as the growth rate is projected to slow to an annualized 2.7% from 2.9% in the fourth-quarter of 2017.

Signs of slowing economic activity is likely to dampen the appeal of the New Zealand dollar as it gives the Reserve Bank of New Zealand (RBNZ) greater scope to keep the official cash rate at the record-low, and the central bank may continue to strike a cautious tone at the next meeting on June 28 as the central bank expects ‘to keep the OCR at this expansionary level for a considerable period of time.’ With that said, the RBNZ may continue to endorse a wait-and-see approach for monetary policy, with NZD/USD at risk for further losses as market participants scale back bets for a rate-hike in 2018.

However, an unexpected pickup in the growth rate may trigger a bullish reaction in the New Zealand dollar as it puts pressure on the RBNZ to start normalizing monetary policy, and the central bank may gradually change its tune over the coming months as ‘the recent growth in demand has been delivered by an unprecedented increase in employment.’ Sign up and join DailyFX Currency Analyst David Song LIVE for a broader discussion on current themes and potential trade setups!

Economic activity in New Zealand climbed to an annualized 2.9% from 2.7% during the three-months through September, with the weakness led by a 2.4% contraction in the region’s primary industries which include agriculture, forestry and fishing. A deeper look at the report showed the goods-producing industries expanding 0.4%, with service-based activity increasing 1.1% during the same period.

The initial reaction was short-lived, with NZD/USD holding above the 0.7300 handle, but the New Zealand dollar struggled to hold its ground throughout the day as it closed at 0.7276. Learn more with the DailyFX Advanced Guide for Trading the News. 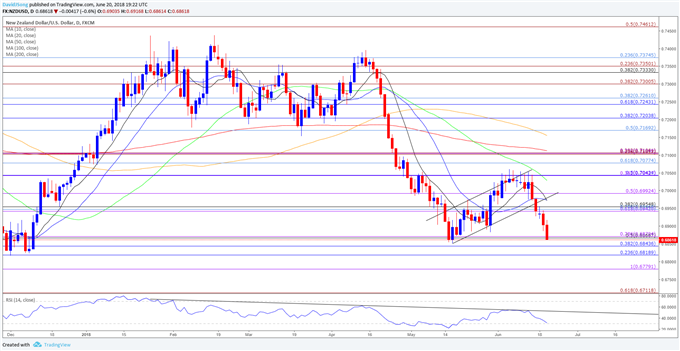