Ahead of the U.S open, Euro equities are under pressure following a mixed Asian session as capital markets weigh easing global trade tensions against the prospect of Euro/U.S. military action in Syria.

The ‘big’ dollar continues to drift, while U.S. debt prices edge a tad higher before this morning’s U.S. inflation data and this afternoon’s .

In the States, inflation pressures appear to be building according to yesterday’s producer-price report, a trend that could also be visible in today’s U.S. .

The markets focus has now officially shifted towards geo-political stress around Syria.

In Japan, stocks fell for the first time in three days overnight, following a strong rally Tuesday, but index-heavy SoftBank rose on rumours that Sprint is in new talks to merge with T-Mobile. The ended 0.5% lower, while the broader declined -0.4%.

Down-under, shares ended lower overnight as investors switched from the defensive sector to resource plays on strength in commodities after China spoke of further opening their economy and lowering tariffs. The slipped 0.5%. In South Korea, the was 0.2% lower.

Shares in China and Hong Kong posted the biggest gains as PBoC Governor Yi Gang offered more details on pledges to open the Chinese economy. In Hong Kong, equities rallied for a fourth consecutive session. The rose 0.6%, while the was unchanged. In China, stocks also ended higher. The blue-chip index rose 0.3%, while the gained 0.6%.

In Europe, regional bourses are trading mostly lower across the board, consolidating some of their recent gains and tracking U.S. futures lower following yesterday’s strong session. 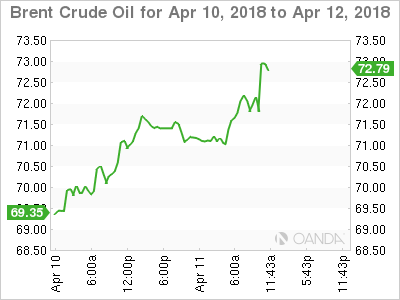 2. Oil hovers atop of 2014 peak as geopolitics vie with supply, gold higher

Oil prices trade atop of their four-year highs, supported by geopolitical tension in the Middle East, although higher U.S. inventory reports are capping price gains.

Note: Syria is not a significant oil producer, but any sign of conflict in the region would trigger concern about potential disruption to crude flows across out of the Middle East.

Earlier today, Saudi energy Minister Khalid al-Falih said his country would “not sit by and let another supply glut surface,” implying that the OPEC would continue to withhold supply.

Capping price are U.S. inventory reports. Yesterday’s U.S. API data showed that crude inventories rose by 1.8m barrels in the week to April 6 to 429.1 million, compared with market expectations for a decrease of 189,000 barrels.

Ahead of the U.S. open, gold prices have touched a one-week high, as the dollar falls to a two-week low and as a host of geopolitical factors stoked demand for the safe-haven metal. has rallied 0.4% to $1,344.16 an ounce, its fourth straight session of gains. U.S. have gained 0.2% at $1,348 an ounce. 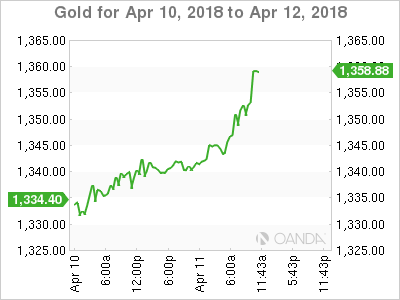 E.U. sovereign yields eased back towards their multi-month lows after the ECB distanced itself from one Nowotny’s comments of a move away from deeply negative deposit rates yesterday.

Note: Nowotny indicated yesterday that there was a possibility of a +20 bps hike in the deposit rate as part of ECB’s efforts to normalize policy. 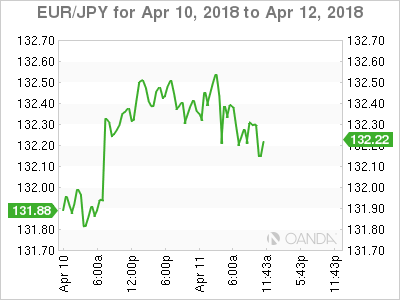 The USD remains on soft footing, somewhat pressured by a number of Euro central bankers commenting on their future rate outlook.

Bank of England’s (BoE) McCafferty (dissenter) noted the U.K. policy-makers should not delay its next rate hike, while European Central Bank’s (ECB) Nowotny stated, “a good place to start on its normalization would be a 20-bps hike in the discount rate.”

(€1.2374) is making an attempt to penetrate the psychological € 1.24 handle despite the ECB playing down Nowotny hike comments.

Russia’s rouble (RUB) extended it recent losses to hit its weakest since November 2016 as selling continued in the wake of new U.S. sanctions and as geopolitical tensions over Syria rose, with Turkey’s lira (TRY) also falling another record low atop of $4.1502). 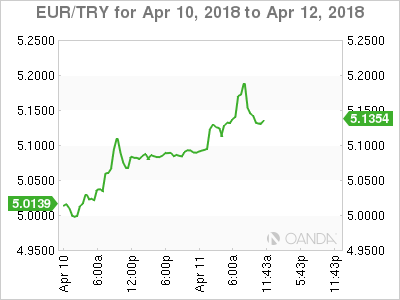 Data this morning showed that U.K. factory output declined in February, the latest sign the U.K. economy slowed in Q1.

Market expectations were for the U.K. to lag its peers for a second consecutive year as uncertainty over the country’s future ties to the E.U. weigh on activity. 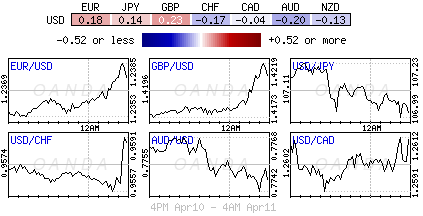