Over the past fortnight, fixed income, forex and the commodities market have become rather boring and range bound. Will today’s Fed monetary policy announcement be the facilitator to end this market consolidation?

Futures prices would suggest rather strongly that, nope, there is nothing new to be seen this afternoon. It’s what you would call a “continuity” meeting, with little fanfare and maybe, but unlikely, a comment on trade tensions.

Capital markets may have to wait until Friday’s (NFP) for some action, but that could even be a stretch as market participants historically head for the hills for holidays. Only liquidity tends to be a real concern this time of year. U.S. payrolls are predicted to show a healthy labor market, with 190,000 new jobs.

Dominating today’s U.S. central bank meet is conflicting signs over the state of the Sino-U.S. trade relations. It’s again pulling markets in different directions on rumours that the Trump administration is expected to announce this morning plans to propose tariffs of 25% instead of the initially proposed 10% on $200B of imported Chinese goods.

Both equities and commodities are struggling on these headwinds to trade after China threatened to hit back if the U.S. hikes tariffs. The dollar has found some traction, while JGB’s lead sovereign debt lower.

In Japan, the rallied overnight to trade atop its two-week high, supported by strong earnings for blue chips such as Sony and Sharp and the yen’s slide (¥112.02) to a 10-day low outright. The Nikkei ended the day up 0.86%, it’s highest since July 20, while the broader closed out 0.94% higher.

Down-under, in a muted session, stocks finished slightly lower as the heavily weighted banks weighed. A late retreat left the settle down 0.07% after Tuesday’s 0.03% gain. In South Korea, the index edged up 0.51% overnight while the market awaits the outcome today’s Fed meeting, despite fears of an escalation in U.S.-China tariff war.

In China, stock selling accelerated, leaving the market a noted regional underperformer earlier today. After posting its best month since January with a 1% gain, the slid 1.8% to log its worst day in three weeks, while the Shenzhen Composite fell 1.7%. Weighing again were vaccine makers and as the Sino-U.S. trade war looked set to escalate with the threat of higher U.S. tariffs.

In Hong Kong, shares ended lower also, dragged by property developers, and as weak data and an escalating trade war dimmed the outlook for growth in the mainland. At close of trade, the was down 0.85%, while the lost 0.5%.

In Europe, regional bourses trade mixed in a range bound trade with the an outlier trading over 0.6% lower, weighed down by mining names. 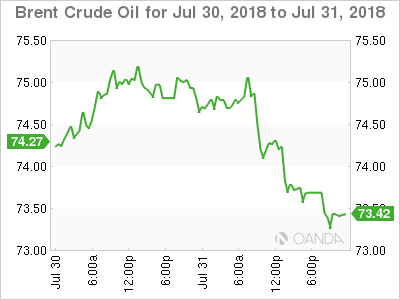 Oil prices have slipped again this morning pressured by a market report yesterday that U.S. stockpiles of crude rose unexpectedly and by higher OPEC production, adding to indications of abundant supply.

Note: Last month, Brent fell more than 6% and U.S. crude slumped about 7%, the biggest monthly declines for both benchmarks in 24 months.

Ahead of the U.S. open, gold prices are lower, pressured by a stronger U.S. dollar on rising trade war fears and ahead of today’s Fed rate announcement. is down 0.2% at $1,220.77 an ounce. The yellow gained slightly on Tuesday on a weaker after a report that the U.S. and China were trying to restart negotiations to defuse a potential trade war. U.S. are 0.3% lower at $1,220.10 an ounce. 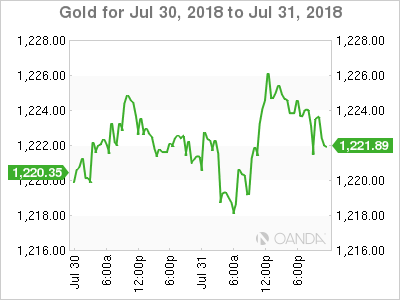 3. Sovereign yields look to back up

Fed fund futures are currently pricing in an 80% chance of a rate hike in September and a “hawkish” FOMC statement that echoes the optimism of Fed Chair Powell will leave the market convinced that there will be at least one and possibly even two more rounds of tightening this year – December is the final candidate.

Today’s Fed statement will most likely highlight the underlying strength of the economy and the uptick in inflation and a ‘hawkish’ Fed should also raise the markets hopes that Friday’s non-farm payroll (NFP) report will be strong with wage growth rising and the unemployment rate falling.

Elsewhere, Japan’s benchmark 10-year JGB yield has backed up to 0.131%, an 18-month high as the fixed income dealers test the BoJ’s resolve after the central bank said it will allow for greater flexibility in yield moves.

Earlier this morning, the Reserve Bank of India (RBI) raised its repurchase rate by 25 bps to 6.50% as expected and leaves its cash reserve ratio (CRR) at 4%. The decision was not unanimous – 5:1 vote. Tomorrow, in the U.K., Governor Mark Carney is expected to hike interest rates by 25 bps despite ongoing Brexit worries. 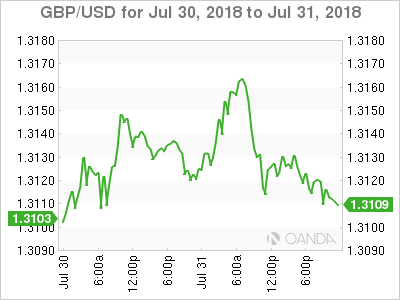 Today’s Fed rate announcement is not expected to have a material impact on the USD outright. No rate rise is expected until September (odds of 80% already baked in) as domestic U.S. data has not changed much since the forecast update at the June meeting.

For the Fed, its challenge going forward is communication – how will Powell and company move away from regular rate rises without their actions being interpreted as a sign of a weaker growth outlook?

The Fed has been raising rates every three months, but with rates currently between 1.75% and 2.0%, they are encroaching on the “neutral” rate of 3% quickly.

Note: There is no press conference today, maybe it will be explained away next month.

Elsewhere, summer holidays are kicking in and that leads to ranges consolidating, something we have been witnessing over the past fortnight. EUR (€1.1679) CHF ($0.9920) and GBP (£1.3113) are little changed outright and today’s FOMC decision is seen as unlikely to buckle the trend.

However, (¥112.00) continues to move higher, supporting the “carry-trade” after Tuesday’s BoJ rate decisions and the bank’s pledge to keep interest rates “extremely low” for an extended time. 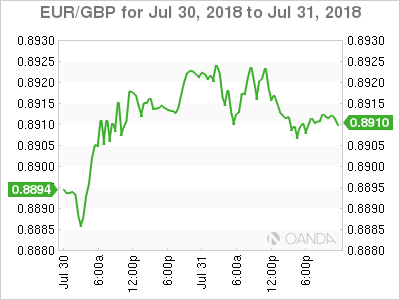 Data this morning from Markit showed that U.K. Manufacturing PMI were at a three-month low in July. There were weaker increases in both output and new orders and intermediate goods production falls for first time in two years. Price pressures also remained elevated as a strong increase in average input costs led to the steepest rise in selling prices in four months.

The seasonally adjusted IHS Markit/CIPS PMI fell to 54.0 in July, down from 54.3 in June and well below the highs achieved around Dec/Jan of this year. The PMI remains comfortably above its long-run average of 51.8.

Last month saw the weakest rate of expansion in U.K. manufacturing output in 16 months, as production growth was hindered by an easing in the pace of increase in new orders.

Digging deeper, the domestic market was the main focus of the slowdown in new business growth, as new export work increased at the fastest pace for six months. 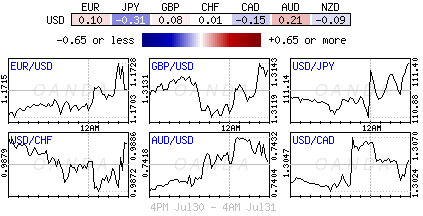