Trade concerns continue to hover over capital markets. Yesterday, the U.S. indicated that it will begin imposing another 25% duties on an additional $16 billion in Chinese imports beginning in a fortnight. On the first go around, China swore to retaliate, they have yet to give specifics, but at the very least, it will be an in-kind retaliation.

Data overnight showed that China’s exports grew faster than expected last month and imports surged, which suggest that the “ongoing” trade war has yet to have a material impact on the world’s second-largest economy’s bottom line.

Nevertheless, the prospects for a full-blown trade war has the U.S. dollar remaining a better bid on pullbacks in a relative tight summer range.

Sovereign yields, further out the curve, trade a tad higher as dealers make room to take down today’s record amount of 10-year Treasury debt worth $26 billion, and an all-time high of $18 billion in 30-year bonds tomorrow.

In currencies, the market is focused on sterling (£1.2904) as it encroaches on its 11-month low as politics continues to provide the overriding direction for the currency. And then there is the Turkish lira ($5.2923) as it makes it way towards record lows on market worries about President Erodgan’s grip on monetary policy.

On tap: The Reserve Bank of New Zealand’s (RBNZ) official cash rate decision and monetary policy statement is due this afternoon (05:00 pm EDT). No change in rates or accompanying statement is expected.

In Japan, the edged lower overnight as the market waits for the start of U.S.-Japan trade talks. Will the U.S. be taking a hard stance, similar to that of China and Europe? Both the Nikkei and broader ended 0.1% lower.

Down-under, shares rallied overnight, with financials higher after reporting a smaller fall in profit than expected, and while miners gained on strong import data from China. The benchmark rose 0.2%, erasing most of Tuesday’s losses. In South Korea, the index rose modestly, closing out 0.06% higher.

In Hong Kong, shares rise on tech and energy boost, but fears of a deeper trade war is capping gains. At close of trade, the was up 0.39%, while the rose 0.32%. In China, the index closed down 1.23%, while its blue-chip ended down 1.59% mostly on profit-taking after Tuesday stellar session. 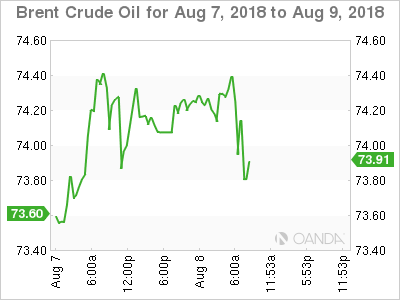 Oil prices have dipped a tad overnight, pressured by Chinese weaker import data, although the market remains well supported on pull backs by falling U.S. crude inventories and the introduction of sanctions against Iran.

Data shows that China’s July crude oil imports recovered slightly last month after falling for the previous two-months, but are still amongst the lowest due to a drop-off in demand from the independent Chinese refineries.

With U.S. sanctions against Iran, which shipped out 3 million bpd of crude in July, officially came into effect yesterday midnight and the market is anticipating that supply losses could range from 600K to 1.5M bpd.

Dealers are also focusing on the U.S. market, where yesterday’s API data showed that crude inventories fell by 6 million barrels in the week to Aug. 3 to 407.2M.

The market will take its cues from today’s EIA inventory report (10:30 am EDT). 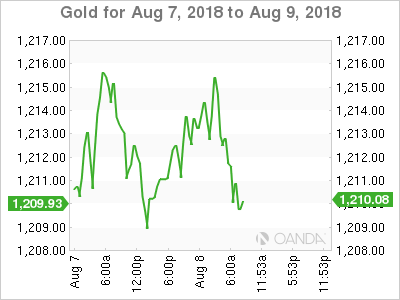 3. Sovereign yields could back up further

Yesterday, the U.S. Treasury Department sold $34 billion three-year notes and it was the largest three-year auction in eight-years. Later today, the Treasury will sell a record amount of 10-year debt worth $26 billion (1:01 pm EDT) and tomorrow an all-time high of $18 billion in 30-year bonds. With so many products on offer, dealers are expected to again cheapen up the curve to make room ahead of the deadline. 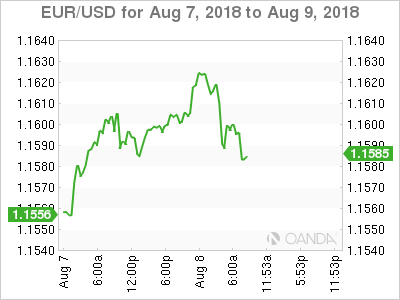 Trading (£1.2903) is proving to be a bit like the Wild West – unpredictable – the pound is again threatening to penetrate yesterday’s record 12-month low now that its failed to benefit from last week’s Bank of England rate rise. Markets are now turning their attention to the Brexit process, which will likely dominate trends in GBP for the remainder of this year.

The Turkish lira ($5.2920) has recovered some lost ground after plummeting to new record lows Monday ($5.42), helped by the Central Bank of the Republic of Turkey (CBRT) announcing a cut in the foreign exchange reserve requirement ratio (RRR) for commercial banks, a measure which should boost dollar liquidity. However, this week’s necessary course of action reaffirms the central banks reluctance to hike rates. Nevertheless, the plunge in the currency over the past few weeks is now on a scale, which has, in the past, prompted the CBRT to hike interest rates aggressively.

Will the CBRT hike the repo rate this week? They need to, but will they dare defy President Recep Tayyip Erdogan?

Note: A Turkish delegation is visiting Washington this week to discuss the friction between both countries. But the U.S. has stated that they remain at odds on its core demand that Turkey free American an evangelical pastor. 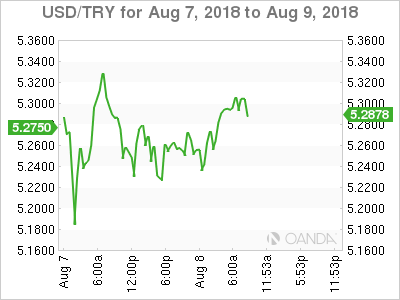 China’s trade surplus with the U.S. narrowed to $28.09 billion in July from a record monthly high of $28.90 billion in June. 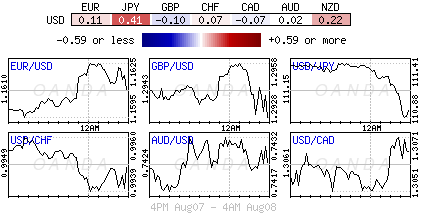