China’s Commerce Ministry said trade negotiations would proceed “based on a timetable” and it will swiftly execute on items where there is consensus.

Since the G20 meeting last weekend, the market has been trying to second-guess the outlook for global growth, with a percentage of the market betting that the Fed will cut interest rates as soon as 2020.

Note: U.S. equity and fixed income markets will be closed today in a mark of respect in the passing of President George H. W. Bush.

Elsewhere, sterling has slipped again, reaching a fresh 18-month low of £1.2672. During parliamentary debate on leaving the EU, which started yesterday, Prime Minister Theresa May suffered several defeats. An amendment was passed that granted members of parliament the right to have a say in future Brexit plans should May’s agreement be rejected next week.

In commodities, oil prices come under pressure again as the market waits for tomorrows critical OPEC meeting where production cuts are expected. Saudi Arabia and Russia are set to meet today for a make-or-break preparatory meeting that’s going to set the direction for the oil market.

Stateside yesterday, stocks plummeted more than 3%, led lower by bank and industrial shares, as investors reacted to the inversion of parts of the U.S. yield curve with a degree of panic – the 2/5’s spread painted a worrying picture about economic growth.

In Japan, the rout continued overnight with the falling to a fresh two-week low. The Nikkei share average dropped 0.5%, while the broader also fell 0.5%.

Down-under, shares experienced a similar fate; with recession concerns and doubts about the Sino-U.S. trade talks unnerved investors. Broad-based losses pushed the benchmark down 0.8% at the close. On Tuesday, the index fell 1.0%. In South Korea, stocks pared deeper declines as investors’ recalibrated expectations from cooling U.S.-China trade tensions. The Kospi was 0.6% lower at the close, led by Samsung Electronics (KS:), which fell 1.7%.

In China, investor doubts over whether China and the U.S. would be able to settle their trade dispute before the 90-day deadline expires shook equity prices. At the close, the blue-chip index was down 0.5%, while the fell 0.6%. In Hong Kong, the closed 1.6%, while the China Enterprises Index lost -1.4%.

Note: Data overnight showed that China’s services sector grew (53.8 vs. 50.7) at its quickest pace in five-months in November due to an uptick in new orders, although the outlook for businesses over the next year worsened for the third month.

In Europe, regional bourses trade lower across the board following sharp losses in the U.S yesterday and weaker Asian equities. Indices have rebounded off the lows tracking higher U.S. futures.

Oil prices remain under pressure this morning, pulled down by a U.S. supply glut and a drop in equity markets.

Oil prices were pressured by yesterday’s API data that showed that inventories rose by 5.4M barrels in the week to Nov. 30, to 448M barrels, in a sign that U.S. oil markets are in a growing glut.

Markets attention now turns to tomorrow’s OPEC meeting in Vienna. OPEC+ are working toward a deal to reduce oil output by at least 1.3M (NYSE:) bpd. However, Russia’s resistance to a major cut is so far the main stumbling block.

Saudi Arabia has indicated a need for steep reductions in output from January, but has come under pressure from U.S. President Donald Trump to help support the world economy with lower oil prices.

The Saudi’s and Russia are expected to meet today in a “make-or-break preparatory meeting” that’s should set the direction for the oil market. 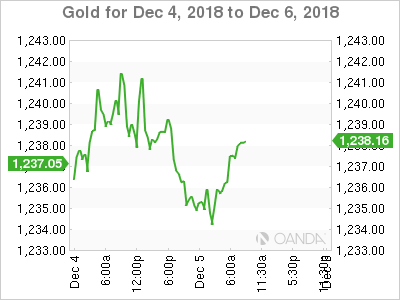 U.S government bond prices continue to rally, pushing the yield on 10-year notes further below 3% as investors continue to scramble into longer-term bonds.

Concerns about trade tensions with China remain, despite the 90-day truce on tariffs. Investors are also less confident about the ability of the Fed to continue to raise interest rates on the path that policy makers had penciled in at their September meeting.

Note: The Fed was forecasting one more rate increase this year (Dec. 19 fed funds are pricing an 83% odds for an xmas hike) and three in 2019.

Fed funds futures indicate the probability that the Fed meets its forecast or exceeds it at 10%. That compares with 66% odds that it increases rates two times or less.

While a lot of bad news has already been priced in, December 11, the day of the Brexit deal vote in the U.K. parliament, may still result in another spike in risk aversion. 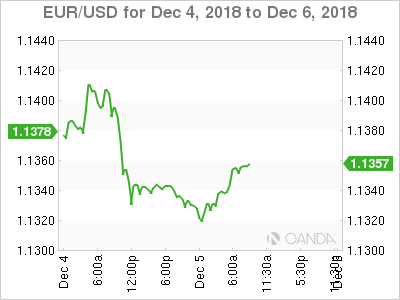 The ‘big’ dollar remains contained in a tight range against G10 currency pairs. The USD is caught in the cross currents of safe-havens flows, as global stock markets remain volatile, and investors’ realignment of Fed rate hike expectations in 2019.

(£1.2736) was initially higher as the Grieve amendment was perceived to support the pound on reduced Brexit risk of a ‘no-deal Brexit’. However, a miss in Nov PMI Services data (see below) has taken some of the wind out of sterling’s sails. 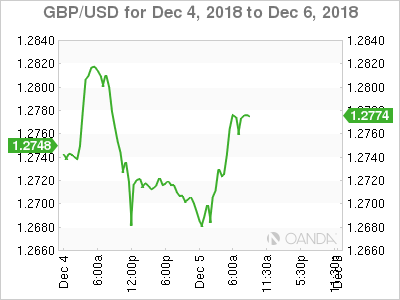 Data this morning showed that the U.K service sector companies experienced another difficult month in November, with both business activity and incoming new work expanding at the weakest rates for almost two-and-a-half years.

IHS Markit/CIPS UK Services PMI Business Activity Index fell to 50.4 in November. This was down from 52.2 in October and the lowest reading since July 2016.

Digging deeper, survey respondents suggested that subdued business and consumer spending had held back growth and that heightened Brexit uncertainty had led to delays with clients’ business investment decisions. 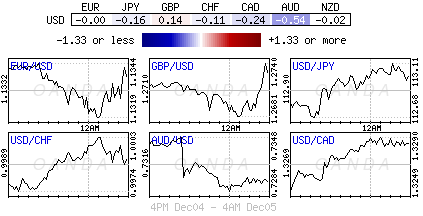