U.S. assets get another leg up from rookie Fed Chair Jerome Powell who again expressed optimism over the U.S.’s economic growth and stable inflation, telling Congress yesterday that domestic data should keep the central bank on track to raise “gradually” short-term interest rates. However, as per usual, there was a disclaimer – it was too soon to say if trade disputes might interfere with his plans.

To date, the Fed has refrained from commenting on trade policy, saying it is outside of their remit, yet Powell did caution that “open economies have fared better than closed ones.”

Elsewhere, commodity prices continue their decent, dragged down mostly by crude prices, which are off another 1% on a surprise stockpile report, while the ‘big’ dollar is outperforming its G10 currency pairs, with many EM currency pairs trading atop their multi-year lows outright.

In fixed income, Treasury yields have backed up along with most European bonds. Global equities have had a mixed overnight session.

In Japan, the share average advanced to a one-month high overnight as exporters – in particular, the auto sector – found support after the U.S. dollar hit a six-month high against the yen (¥113.04). The Nikkei gained 0.4%, as too did the broader .

Down-under, stocks rallied after four consecutive session losses in the past six sessions, supported by one of the country’s biggest companies by market cap. The rallied 0.7% as BHP Billiton (LON:) jumped 3.3% following an upbeat production update. In South Korea, stocks slid to session lows in some heavy trading. After jumping as much as 0.9% on the open, the finished down 0.3%, recording its third-straight drop.

In Europe, regional bourses have opened slightly lower and are trading sideways. The financial sector remains the best performer in muted volatility, while tech stocks are underperforming. 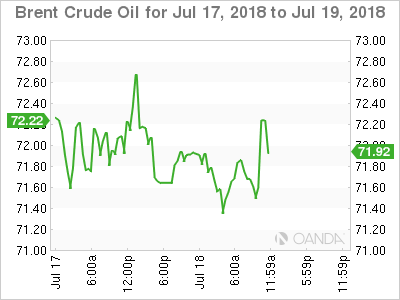 Expect today’s price action to largely depend on what the EIA release comes in at. Yesterday’s API data showed an unexpected rise of more than 600K barrels in national crude inventories. For today, the market is forecasting a decline of 3.6M barrels in U.S. crude stocks for the week through July 13.

Also putting pressure on energy prices for the past month is Saudi Arabia and other OPEC members agreeing to increased production, while investors have also begun to worry about the impact on global economic growth and energy demand of the escalating Sino-U.S. trade dispute. 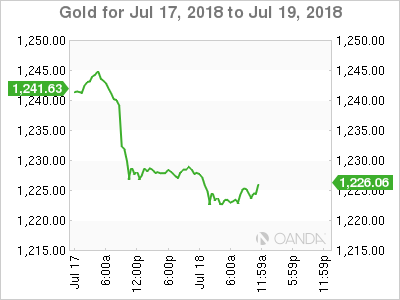 3. Sovereign yields on the move

In Europe, investor uncertainty over global growth is compressing German 10-year yields, and the hunt for yield then sees demand spill over to other debt further out the curve. The gap between German 10- and 30-year Bund yields are at its narrowest in over five weeks at 67 bps.

In the U.S., Powell indicated an “unsurprising” preference for a continued steady rise in interest rates is inevitably flattening the U.S. government yield curve. The spread between the two-year and 10-year Treasury bonds is narrowing and is last at 24.7 bps. 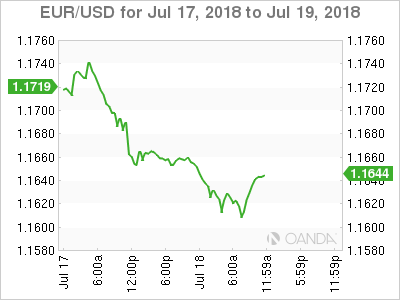 The mighty U.S. dollar is holding onto its recent gains in the aftermath of Fed chair Powell’s testimony yesterday. With the Fed chair reiterating that interest rates would continue to increase gradually again supports interest rate differentials trading strategies.

is a tad softer by approximately 0.3% at €1.1622, while weaker-than-expected U.K. inflation data for June sent sterling to multi-month lows against the dollar and the euro.

has fallen to a 10-month low of £1.3010 and has rallied to a four-month high of €0.8923. Also, Brexit concerns continued to weigh upon the pound as PM May’s government again survived a recent Brexit amendment vote by a “slim” margin.

Note: U.K.’s June CPI was the key focus with prospects of an August rate hike in the balance. Odds for a hike have diminished a tad, now down to 72%. 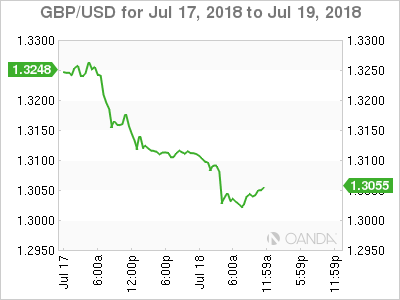 Data this morning showed that annual inflation in the U.K. held steady last month, as summer-clothing sales offset a rise in petrol prices.

As reported from the ONS, consumer prices rose 2.4% on the year and keeps annual price-growth in excess of the Bank of England’s (BoE) 2% target.

Today’s data should keep the BoE in line to hike again next month – only politics and trade disputes could derail Governor Mark Carney’s agenda.

Digging deeper, the data shows that prices charged by companies at the factory gate accelerated in June, gaining 3.1% on year compared with an annual rise of 3% a month earlier, in a sign that inflationary pressures are building. Raw material costs jumped 10.2% on year according to the ONS.

Note: U.K. policy-makers have said they expect to raise borrowing costs three or more times during the next few years to bring inflation back to their goal. 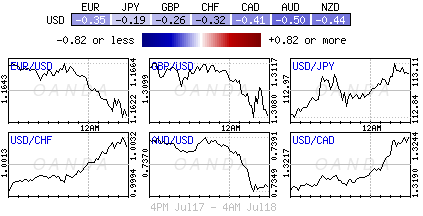