Wednesday, May 30: Five Things Markets Are Talking About

The Bank of Canada (BoC) is expected to leave its benchmark interest rate unchanged (+1.25%) during its policy meeting today amid concern over slowing housing markets and stalled NAFTA trade negotiations.

However, market consensus expects the BoC’s next rate increase to come in July, as long as Q2 economic growth looks strong and housing markets begin to stabilize.

Note: The BoC has lifted its key rate three times since last summer, most recently in January. Last month, Canadian policy-makers said further rate increases would likely be warranted over time, but added that the BoC would remain cautious and use incoming economic data to guide their decisions.

Currently, Canadian house prices are cooling in many cities following the introduction of tougher mortgage financing rules earlier this year. Sales of existing homes have fallen nearly 3% in April y/y, while prices on an annual basis rose at the slowest pace in nearly a decade.

Net result, a slight softening in recent economic data along with uncertainty over trade with the U.S. is expected to keep the BoC on hold.

Elsewhere, the sovereign bond market is showing signs of stabilization overnight after the impressive rout in Italian debt sent investors seeking the exit doors. U.S. Treasuries have fallen back with the ‘mighty’ dollar as the haven bid subsided, the EUR has climbed and Euro stocks are somewhat steady.

In technical terms, the market is catching its breath while the prospect of snap Italian elections – which could effectively become a referendum on the ‘single’ unit – continues to threaten, the market sees the intraday selloff as overdone while the timing of any vote remains unclear.

In Japan, the tumbled to a six-week low overnight after political turmoil in Italy sparked concerns over the stability of the eurozone, hitting financial and exporter shares in particular. The Nikkei ended 1.5% lower and managed to stay above its 75-day moving average, which has become the index’s immediate support level. The broader fell 1.4%.

Down-under, stocks did not fall as much as others in the region as the fell for the eight consecutive session. It dropped 0.5% as financials shed 1.4% and hit a 18-month low amid the global selloff seen amid worries about Italy and the subsequent slump in U.S. Treasury yields. In South Korea, the was one of Asia’s bigger decliners overnight. The Kospi fell 2%, the most since late March and an eight-week closing low, as Samsung (KS:) slid a further 3.5%. That put the week’s drop to date at 6.1%.

In Hong Kong, stocks fell to a three-week closing low overnight; with investor sentiment dampened by the political crisis in Italy and renewed fears over a Sino-U.S. trade war. The fell 1.4%, while the lost 1.6%.

In China, equities fell the most in more than two months overnight, with the hitting a 19-month closing low, amid a global selloff provoked by global geopolitical worries. The blue-chip index fell 2.1%, while the Shanghai Composite Index dropped 2.5%.

In Europe, regional bourses have opened broadly flat with a hint of positivity. Waning concerns over periphery elections supports is supporting stocks, with Italy and Spain outperforming core Europe. 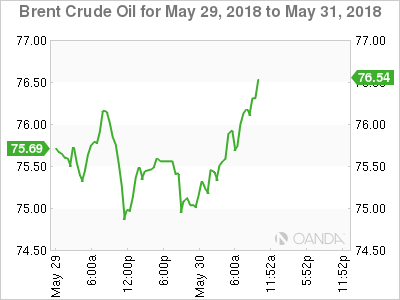 Oil has slipped again overnight, under pressure from expectations that OPEC will pump more and as Italy’s political crisis increased investors’ aversion to risk.

has dropped $5 from its four-year high of $80.50 a barrel on May 17, after reports that OPEC and Russia may increase supply at next month’s OPEC meeting (June 22), reversing policy after 17 months of cutting supplies.

Note: OPEC and non-OPEC producers have had a pact to curb output by about 1.8m bpd since January 2017. The cutbacks have largely removed excess global inventories.

Amid concerns the price rally has gone too far, Saudi Arabia and Russia are discussing raising OPEC and non-OPEC oil output by around 1 million bpd.

Ahead of the U.S. open, gold prices had edged a tad lower overnight as a robust U.S. dollar weighed on the market, but concerns about political turmoil in Italy and Sino-U.S. trade conflict is limiting losses. is 0.2% lower at $1,296 per ounce, while U.S. for June delivery are down 0.3% at $1,295.40 per ounce. 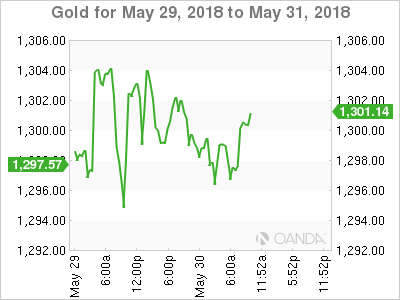 3. Yield trading not for the faint of heart

Italian bond are rebounding, with the 10-year yield falling as much as 19 bps, to 2.98% as global panic eases. The U.S. benchmark bonds have given up some of yesterday’s gains to send yields back above 2.80%.

Italian government bond yields have pushed away from their multi-year highs from yesterday as the market uses the opportunity to snap up cheap paper.

The two-year government bond, the focus of recent selling, was down 33 bps at 2.095%, having hit its highest level in five years in early trading.

Elsewhere, the yield on U.S. 10-year Treasuries has climbed 7 bps to 2.85%, the biggest increase in more than two-weeks. In Germany, the 10-year Bund yield has climbed 7 bps to 0.33%, the first advance in more than a week and the largest surge in almost six weeks. In the U.K., the 10-year Gilt yield has gained 6 bps to 1.197%, the biggest climb in almost two weeks. 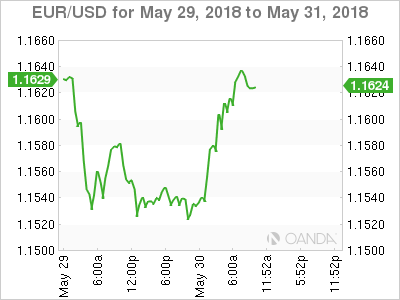 The overnight session has seen a slight reversal in the recent risk aversion flows, with the ‘big’ dollar subject to consolidation as some of its interest rate support has eased with the U.S. yield curve flattening. Despite Italian and Spanish political uncertainty, there seems to be less volatility in their respective yield curves.

Earlier this morning, Euro inflation data for May appears to have provided some support for the ‘single’ unit. The has moved back above the psychological €1.16 handle (€1.1615) to recover from its recent 10-month lows. 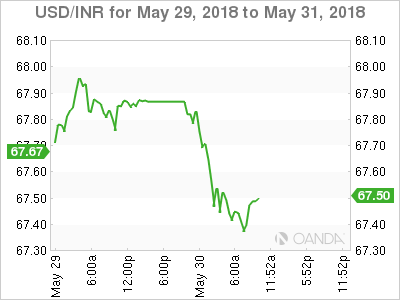 Indonesia’s central bank raised its benchmark interest rate for the second time in two weeks, in their latest attempt to tame the effects of a stronger dollar.

Bank Indonesia (BI) has lifted the seven-day reverse repo rate to 4.75% from the previous 4.5%, a move that had been widely expected.

This move is being considered as a pre-emptive, front-loading and ahead-of-the curve policy response.

The INR has strengthened 0.1% outright after falling to a three-year low last week, driven by a broad-based advance in the ‘big’ dollar.

Note: The INR has depreciated 3% outright so far this year, despite BI spending billions of dollars to curb that slide. The currency fell as much as 4.5% for the year at its low last week. 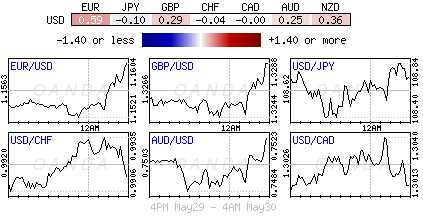