Global stocks are trading mixed ahead of today’s , with Asian shares closing out higher, while Euro bourses are a tad down as Italy’s budget talks continue to be a source of concern.

The Italian government has until tomorrow to outline its fiscal and economic projections ahead of a budget law discussion due to take place in October. Currently, the markets remains concerned that the government will try to pass a budget that is out of step with EU rules.

This afternoon, the Fed is expected to raise interest rates by 25 bps to a corridor of 2% to 2.25% as it continues to roll back easy-money policies.

Market attention will focus on the forward guidance, including the new ‘dot plot’ diagram, to gain insight into the plans for 2019 and beyond.

Currently, the U.S. dollar trades steady while U.S. Treasury yields trade atop of their the seven-year highs reached in May.

1. Stocks trade mixed ahead of Fed

In Japan, gains overnight lifted the to an 8-months high as the index was able to overcome the impact from a number of companies’ stock prices being adjusted lower amid looming dividend payments. The index rallied 0.4%. Again helping was the U.S. dollar briefly hitting a two-month high and breaching ¥113.

Down-under, the was able to squeeze out a slight gain and ended up 0.1% at the close. Energy stocks rose a further 0.9% as oil prices rallied, while materials gained 0.8%. But financials fell 0.6% as the initial report on an alleged industry misconduct looms and health care dropped a fresh 0.7%.

Note: South Korea’s markets were closed for a holiday.

In China, stocks rallied overnight on hopes that global index provider MSCI would consider quadrupling the weighting of Chinese big-caps in its global benchmarks. At the close, the index was up 1%, while the blue-chip index was up 1.1%.

In Europe, regional bourses remain somewhat muted ahead of the Fed’s rate announcement. 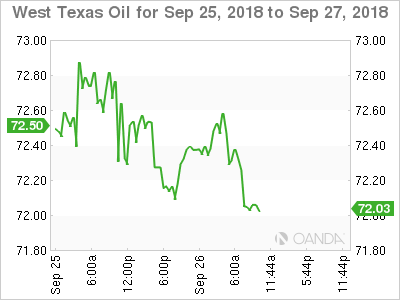 While global trade tensions remain a source of investor concern, rising oil prices are taking on a greater importance.

Despite U.S. President Donald Trump calling for increased crude output from OPEC, crude prices have been lifted by the pending U.S. sanctions on Iran in November.

Producers fear pumping more oil to compensate for lower output from Iran and Venezuela could mark a return of oversupply.

Expect dealers to take their cue from today’s official figures on stockpiles and refinery runs from the U.S Department of Energy’s Information Administration (EIA 10:30 am EDT). 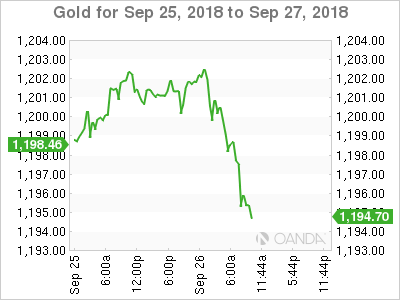 Italian bond yields continue to trade under pressure in the run-up to the presentation of Italy’s budget draft, scheduled for tomorrow. A budget deficit below 2% gap (to GDP) is expected to give further support to Italian BTPs.

Elsewhere, German Bund yields remain just below highs reached yesterday. Germany’s 10-year Bund has opened at around 0.54%, down around 1 bps. 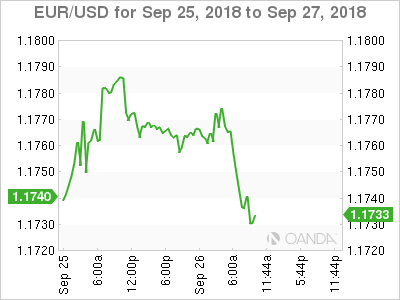 While the Fed’s monetary policy tightening is likely to end next year, investors are trying to figure out if most of the dollar’s strength is behind us.

Later today, the Fed could remove the word “accommodative” from its statement, but consensus thinks this is most unlikely. Even if it does, the U.S. dollar may still find it difficult to find support due to its trade and protectionist policies.

Down-under, the (NZ$0.6655) bounced higher on an uptick in business confidence. 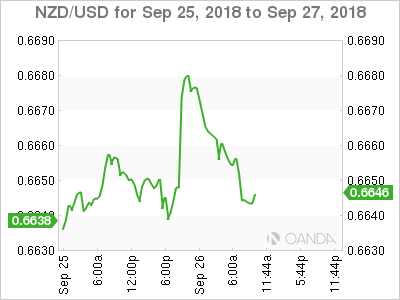 An ANZ Bank survey showed a net 38.3% of respondents expected the Kiwi economy to deteriorate over the year ahead – a previous poll showed 50.3%, which was its lowest reading since 2008.

Last month, the Reserve Bank of New Zealand (RBNZ) said gloomy business confidence was a major risk that could result in firms holding off on investment, dragging on growth and increasing the chances of another cut in official interest rates.

Later today (05:00 p.m. EDT), the RBNZ is widely expected to hold rates at a record low of 1.75% and signal that it plans to hold them there for an extended period of time. 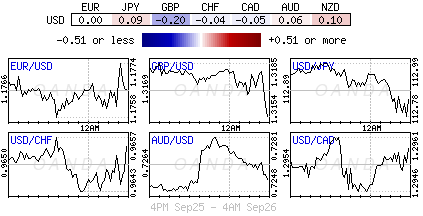