After markets saw their worst week this year, capped on Friday by the weakest since September 2017, it’s hard not to wonder whether next week we’ll be seeing a buying opportunity or the final rally before the equity bull market comes to an end.

The selloff in U.S. stocks extended across the full trading week, for a fifth day, and the slumped. Though each of the four major U.S. indices—the , , and —rebounded on Friday to close well off their intra-day lows, they all still sealed the worst week since the pre-Christmas rout. Declines were seen every single day last week, wiping out two-and-half weeks worth of gains.

Corrective Rally Within A Downtrend 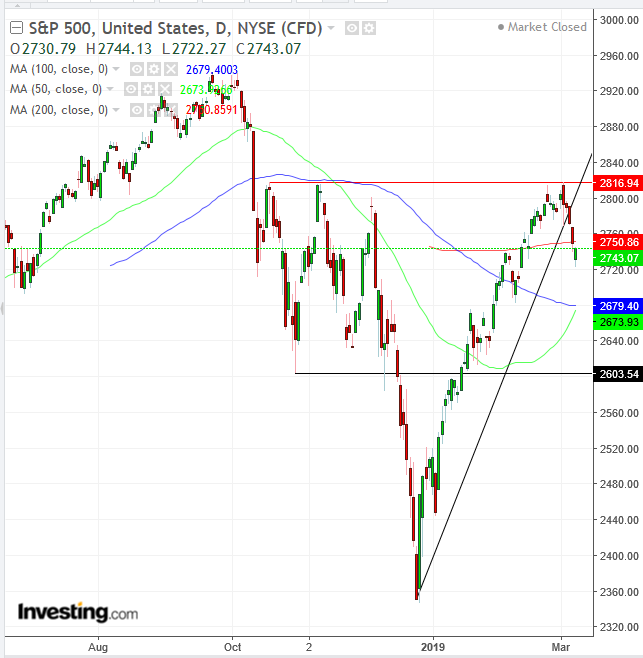 Technically, the SPX was stopped dead at the 2,800 level. It’s the highest point hit since the post-Christmas bounce, but as we’ve previously noted, it’s a correction rally within the downtrend from the September record, after the index posted descending series of peak and trough, completed in December at the 2,600 level (black horizontal line).

Since the Oct. 17 peak of 2,816.94 (red line) was not bested, we maintain the above view. Also, the price gapped on Friday, falling below the 200 DMA. This stopped the 50 DMA from crossing above the 100 DMA. Finally, on Wednesday, the price violated the uptrend line since the December bottom. 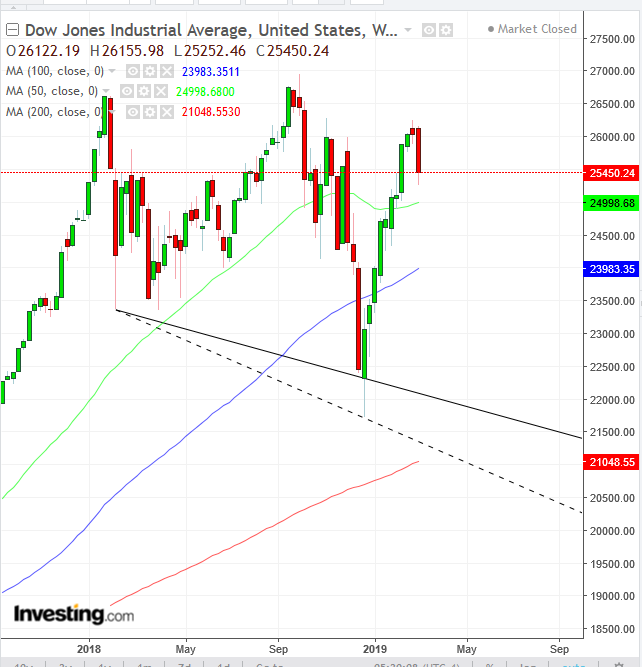 The Dow Jones Industrial Average slipped 0.09% on Friday, losing 2.21% for the week. Technically, like the S&P 500, it may be forming a massive, downward-sloping H&S top (when the price is too weak to even form a proper right shoulder), in play since January 2018. Notice the 200-week MA realigning with the potential neckline.

The NASDAQ Composite skidded 0.18% lower on Friday, plummeting 2.34% for the week.

The Russell 2000 dropped 0.2% on Friday and plunged 4.26% for the week, making it the obvious underperformer. For some time now we’ve been wondering about the inconsistent performance of domestically-focused small caps during the ongoing trade talks. Much of last week’s market rout was attributed to an apparent lack of progress in settling the U.S.-Sino negotiations which makes it curious that once again that’s when small caps lag. Investors should have been rotating out of multinationals, propelling small caps higher since they don’t face the risk for increased tariffs.

We’ve attempted to place the blame on a strong dollar creating a headwind for export-reliant companies. However, back in November when the dollar was this high, small caps and large caps followed the trade war paradigm outlined above precisely. At that time, investors sold off multinationals and bought the smaller U.S. firms. When anxieties were assuaged, they back-pedaled out of small caps and returned large caps. So, the dollar can’t be the direct culprit for throwing this market out of sync. 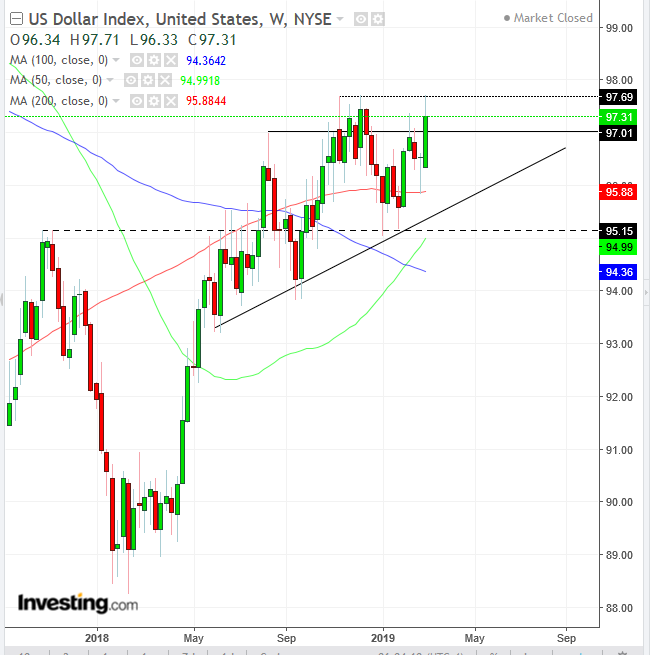 Perhaps the outlook for a stronger dollar is what’s driving the disparity. The USD added 0.82% for the week, stopping at the resistance since early November. The price has been developing an ascending channel since early June.

The pattern formation may be necessary to absorb all the supply since the November highs (dotted line). Last week marked the fourth week in which the price remained above the 200 week MA. Two weeks ago, the price fell, touched the moving average and soared higher, closing at the top of the weekly session.

With the greenback growing more robust, investors may be worried about , which would force the Fed to continue in order to keep the economy from overheating. That would strengthen the dollar, despite the president, his trade war and his policies.

That could also mean the market may be discounting the prevailing narrative of a dovish Fed pressing on the brakes. The possible market narrative might be signaling that if inflation rears its ugly head, the Fed will show its true colors and hit that accelerator.

But why would inflation suddenly rise? Based on Friday’s key NFP release, have finally caught up with the economic expansion and the historically low rate. Wage growth ticked higher by 3.4%, to the highest in a decade, the most since the Great Recession. Moreover, since inflation is under 2%, the wage growth enjoyed even greater buying power. The higher wages, compounded by currently low inflation, will increase demand for goods, ultimately pushing prices higher, driving inflation.

Friday’s report showed that the U.S. had added 20,000 jobs in February, its smallest increase in 17 months. This confirms the concerns we raised Thursday, after for private companies disappointed. While the falling unemployment rate may offset the dismal NFP headline number, suggesting it’s a corrective month after January’s rapid growth, it could also signal a bottom, or full employment, from which the only way next for unemployment is up.

Since low unemployment has been the single most significant data point the Fed has been using to demonstrate the health of the economy, that would add to the mounting evidence of a slowdown—in China, Europe, and, finally, at this late stage of the business cycle, as well as the oldest bull market in history, in the U.S. 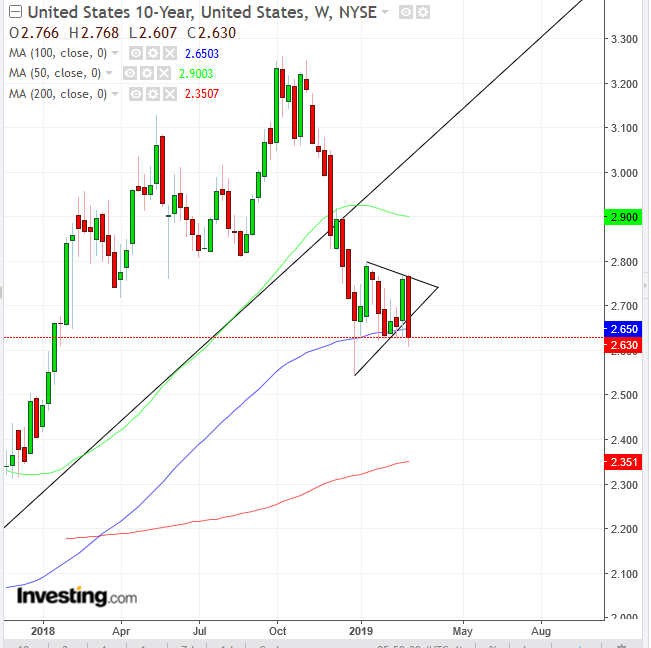 Intermarket analysis provides another important signal that equities will continue to fall. Yields on the U.S. Treasury note have fallen below their 50-week MA and immediately below their uptrend line since July 2016.

Last week, they slumped below their 100 DMA, as they closed below a symmetrical triangle, bearish in a downtrend. Yields fall when demand for Treasurys increases, which typically occurs when investors rotate out of risk assets, such as equities, and into the security of sovereign bonds. 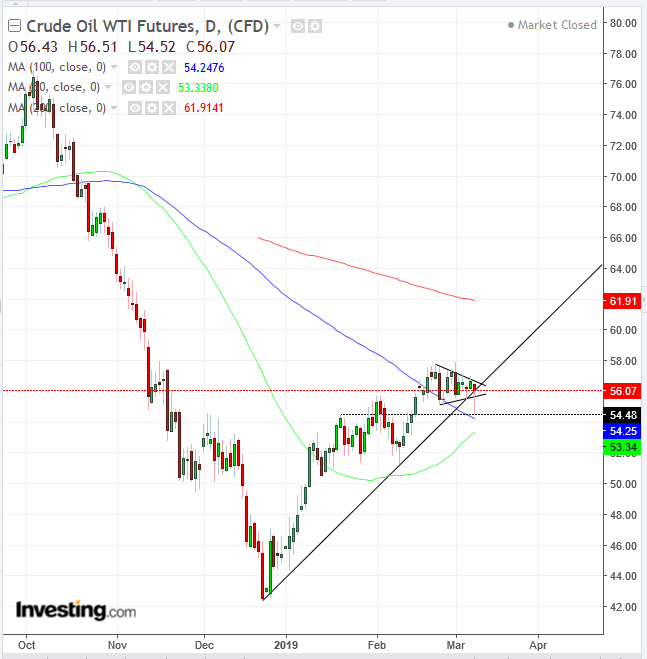 has been consolidating after demand absorbed all the supply of the late-January highs, as OPEC+ cuts whipsaw U.S. production. Friday’s low reached the precise level of the previous resistance.

At that point, dip buyers pushed prices back into the pattern and to the uptrend line since the December bottom. The consolidation is converging, forming a pennant, bullish in an uptrend. Notice how beautifully the price range has been supported by the 100 DMA; the 50 DMA is joining the support, as well.

Fundamentally, the Saudis are confident prices will rise. They expect U.S. and Chinese demand will increase, without the cartel having to alter their production cuts.

U.K. Parliament on whether to avoid a no-deal Brexit

7:30: U.K. – : Chancellor unveils the outlook for government spending. Given the impending Brexit deadline, this may be a more interesting statement than usual.

Depending on previous results earlier in the week, U.K. Parliament expected to vote on whether to seek an extension to Article 50