HomenewsMarket OverviewWeek Ahead: Cryptos Could Weigh On Equity Markets As Inflation Worries Flare

Week Ahead: Cryptos Could Weigh On Equity Markets As Inflation Worries Flare

Stocks on Wall Street closed mixed for the day on Friday, after a volatile session fueled in part by cryptocurrency declines. The major US benchmarks—the , , and —also finished mixed for the week, with the broad benchmark down 0.4%, the 30-component Dow down 0.5% over the same period, while the tech-heavy NASDAQ ended a four-week streak of losses, gaining 0.3%. The trajectory of the Reflation Trade remains unclear into the new trading week.

Indeed, the major indices provided a murky picture of the stock market’s health on Friday. While the Russell 2000 was up for the second day, it was still down for the week. The dropped Friday but rose slightly for the week. The S&P 500 was the only gauge that showed any consistency: it snapped a two-day rally, falling on Friday, as well as for the week.

The broad stock market whipsawed during the final day of the trading week, buffeted by retail traders on worries about digital currency assets. Still, the dominant theme remains inflation.

After Philadelphia Fed President Patrick Harker said on Friday the central bank should speak about reducing bond buying sooner rather than later, the Reflation Trade was back in the spotlight, along with the outlook for . Since the US economy is expected to gather steam as the country opens up, increasing corporate profits which are, of course, the foundation for stock market returns, will a spike in inflation ruin the party?

Though Treasury yields, including for the benchmark, are higher, rates aren’t actually high. In fact, they’re still near the lowest on record. 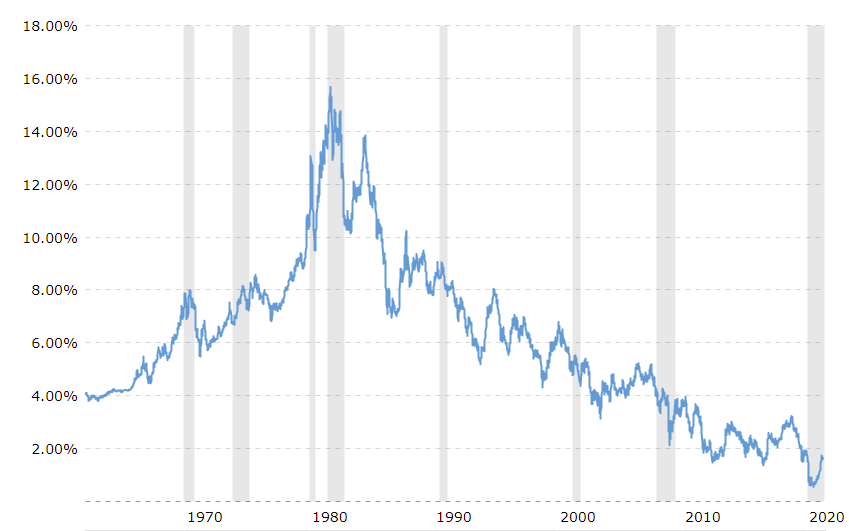 So, what spooked investors so much? It wasn’t how high yields rose, but rather how quickly they jumped.

If what economists would like is a Goldilocks Economy—where inflation is neither too cold nor too hot, so that growth can keep chugging along at a tempered, sustainable pace—the worry is that this economy will ratchet up too quickly and burn out. That’s a hazard of going from zero to 100, then continuing to press the gas.

Housing prices catapulted upward over the past year, fueled by a combination of a surge in demand, lower supply and rising costs along with record high and prices, as well as other commodities also rising.  The last time housing prices soared, during the early 2000s, they triggered a market meltdown that caused the 2008 Great Recession—from which point we have had no inflation. Is this a sign we’ve come full circle?

While it may be tempting to make that connection, a broader analysis reveals major differences between then and now. Falling and low mortgage rates can support a rise in prices, along with the current, estimated $1.5 trillion in household savings—all amid what is expected to be a strong recovery, while the 2008 crash followed a more than five-year bull run.

Prior to the 2008 market debacle, subprime mortgage industry lending practices were reckless, with lenders turning a blind eye on the practices of their own salespeople, who were pushing loans to buyers, no matter how unqualified they may have been. Current lending standards are more prudent.

As well, though the sharp increase in yields after the dramatic stock price gains in 2020 may have pushed valuations to the highest level since the dotcom bubble, there are a number of key differences in play.

The S&P 500 surged 75% in the first 12 months of the current recovery, reflecting the outlook for a rebound in corporate profits. However, the parabolic jump in stock prices was exaggerated compared to the 49% rise in earnings in the first quarter of this year. The big difference now versus the dotcom era bubble is that then, company profits peaked, whereas now they’re bouncing off a low.

The overall P/E ratio dipped from almost 24 times to near 22 times. While it is much higher than the historical average, if the past is a guide, this metric may decline just when earnings rise.

Price-to-earnings ratios tended to climb during the first year of a bull market, along with the optimism that permeates exciting, new beginnings. Afterward, however, P/E ratios often drop even as corporate results improve. It’s a self-fulfilling prophecy; investors don’t expect stocks to keep climbing at the same accelerated rate.

This suggests stocks could keep rising, though at a more moderate pace, as sector performance continues to evolve. At the same time, SPX technicals are signaling that the index is straining to break out higher. 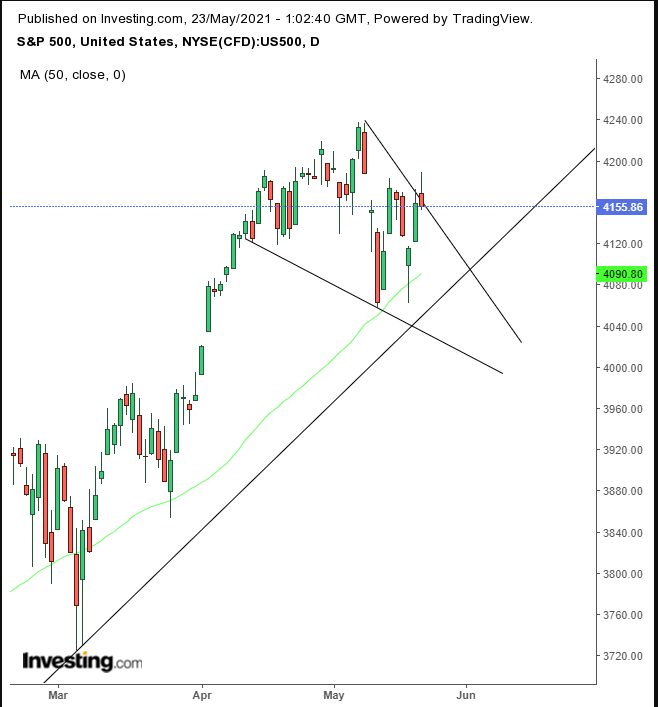 The S&P 500 developed a bearish shooting star on Friday, as the benchmark struggled to complete a bullish wedge, after it had hammered out a support above the previous low. An upside breakout would signal another leg up.

The rose on Friday, despite falling yields. However, the global reserve currency fell on a weekly basis, along with yields. 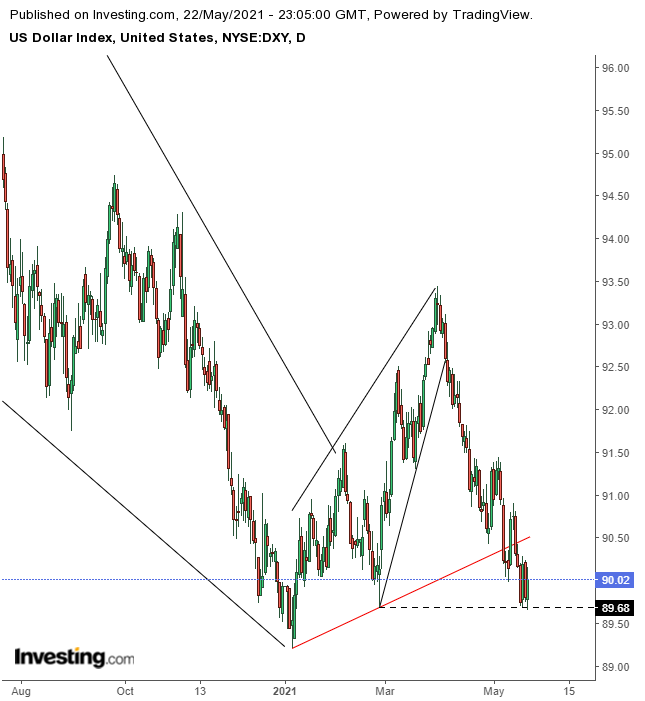 The greenback range-traded for the fourth day at the Feb. 25 low, also the bottom of its wedge. After that wedge completed we made a bearish call on the USD, but we’re now waiting to see whether there is another leg up coming after the currency completed a massive wedge from the 2020 high.

Despite Friday’s dollar advance, rose for a second straight day, or for the sixth day out of seven. 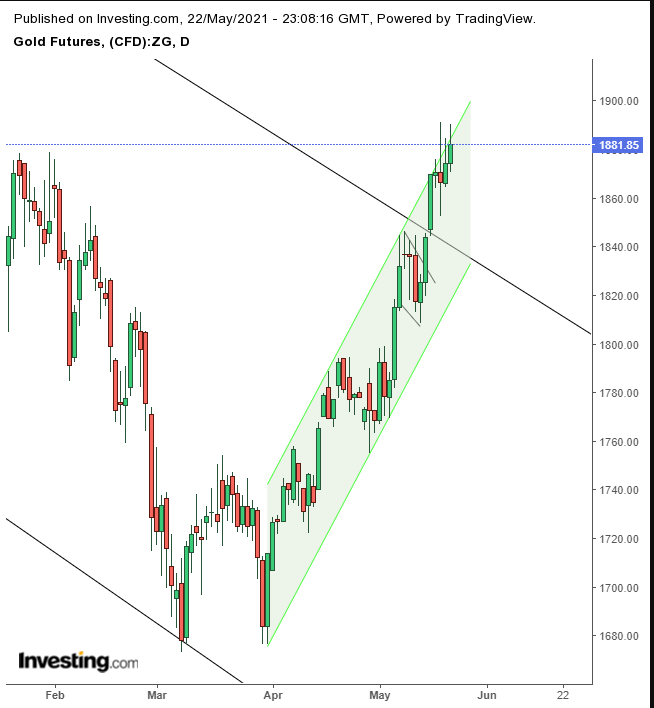 The precious metal extended an advance after breaking free of its falling channel since the 2020 peak, boosted by a falling flag. The yellow metal has been struggling against the top of its rising channel, suggesting a potential pull-back to retest the flag, before another leg higher, toward $1,920 to actualize the flag’s implied target.

found support on Saturday on the uptrend line since October, for the fourth straight day. On Friday, the largest cryptocurrency extended its selloff after China once again reiterated its warnings that it means to investigate cryptocurrency mining and trading.

Open Money Initiative co-founder Jill Carlson points out that Bitcoin has returned to roughly its mid-January levels, which was before Tesla (NASDAQ:) founder and CEO Elon Musk revealed his company’s massive investment in the digital token when he also tweeted that the EV auto manufacturer would accept Bitcoin as payment. Recently, adding to the current BTC slump, he backtracked on the company’s policy of Bitcoin as an instrument of payment, citing environmental concerns surrounding mining the token. Bitcoin has now returned to about the same levels as where it was at the beginning of 2021.

Carlson says the whipsaws are now being created by highly leveraged retail traders, who were initially attracted to the asset by Musk’s earlier tweets and are now selling for the same reason—Musk’s revised take on the cryptocurrency. However, institutions are still buying, suggesting Bitcoin trading will have shifted from weaker to stronger hands, signaling additional rallies ahead. 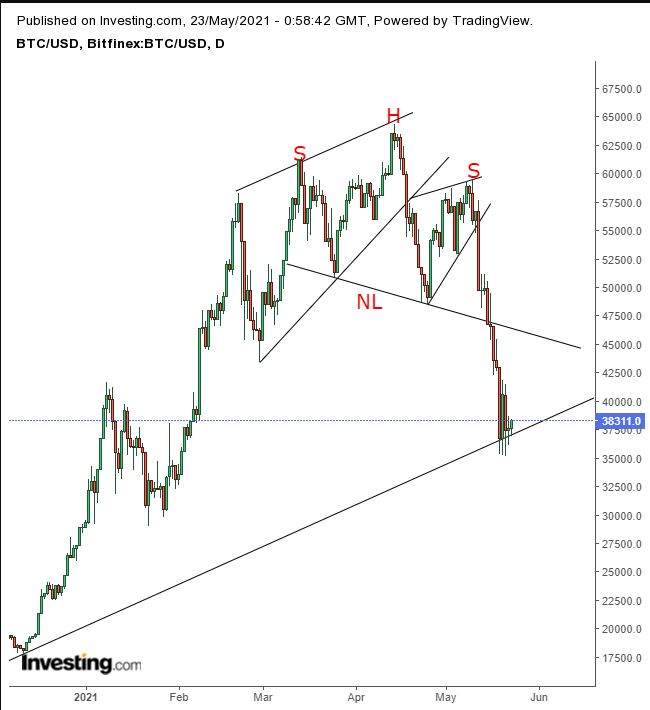 After having reached our target, and losing more than half its value, if Bitcoin can hold above the $30,000 level, we expect it to rebound and continue rallying.

jumped on weather concerns in the Gulf of Mexico, but ended the week lower on Iran nuclear talks, whose resolution would put Iranian oil back on the market, increasing supply. 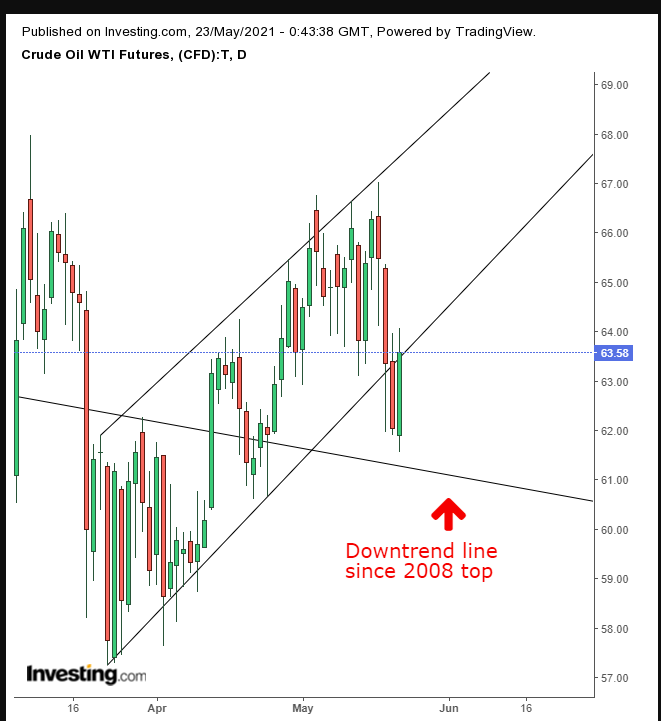 Germany, Switzerland and Canada: markets all closed for holidays.