After the contradictory signals on economic outlook, market structure and price action displayed last week, where can we expect equities to head this coming week? We can’t say for certain, of course, how the , , or other indices will perform, nor can we predict where beleaguered tech stocks might head next.

However, stocks have consolidated on the verge of a downside breakout, with the potential for a market top. In such a scenario, there’s even an economic argument for a 30 percent deeper correction. 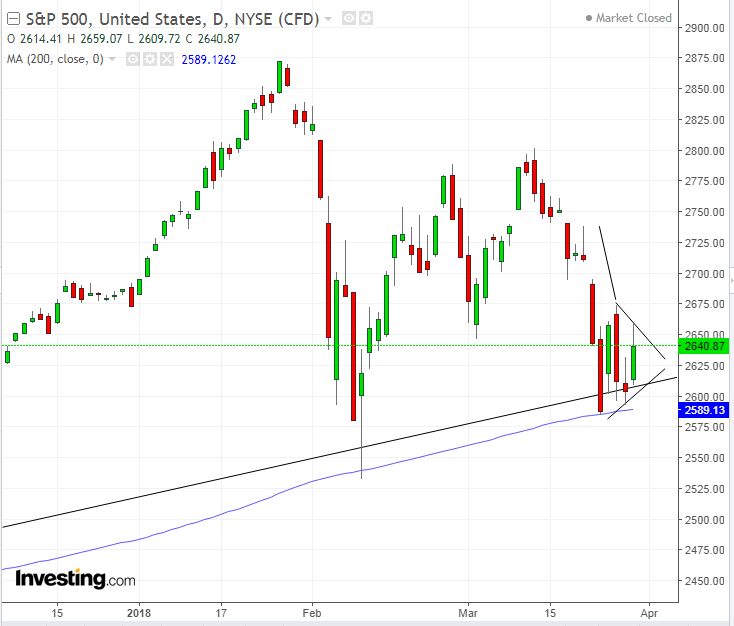 This past week’s US equity price action didn’t help answer one of our key questions from the previous week, whether stocks will continue to be sold off after the worst week in two years. On the one hand, stocks finished the week stronger. On the other hand, they ended a 9-quarter winning streak with the SPX down 1.2% for the quarter; the NASDAQ rose 2.3%, its weakest showing since the final quarter of 2016; the Dow finished the quarter down 2.49%, arresting its longest uninterrupted rally in 20 years.

We have been maintaining for some time now that while nothing may have changed fundamentally, uncertain sentiment was wearing out investor stamina, potentially to the breaking point. We argued last week that while stocks have not actually topped out, our money was on yet a deeper correction. We cited that even with the strongest rebound since 2015, safe havens were on the verge of an upside breakout. That assessment continues to hold true going into this week.

On the economic front, Saxo Bank Chief Economist Steen Jakobsen believes consumer spending has maxed out. fell in March to 127.7, missing the 131 estimate and halting a two month streak of gains. The six month outlook for business conditions was less optimistic as well.

Jakobsen thinks overly exuberant investors are now pricing in a Goldilocks economy—a scenario in which growth won’t be too hot but neither too cold; rather, it will be just right, making it more sustainable. This may occur, but there’s also the possibility of something more frightening: a Frankenstein economy where all the mismatched parts don’t produce a pleasing whole, potentially driving a further 25-30 percent correction.

Still, JPMorgan advised clients to buy the dip in a variety of markets, as investors continue to overreact to a series of negative narratives, including yields that are the highest they’ve been in four years, compounded by additional, possibly unexpected via a hawkish Fed. At the same time, strong macro economic fundamentals are expected to prevail. The S&P 500 for example, is trading at a 16 times forward price-to-earnings multiple; that’s lower than its 30-year historical median valuation.

Market structure provided a mixed picture for the coming week. While the classic safe havens and the weakened, investors increased demand for Treasurys, leading yields to top out, and hitting a 2-month low. 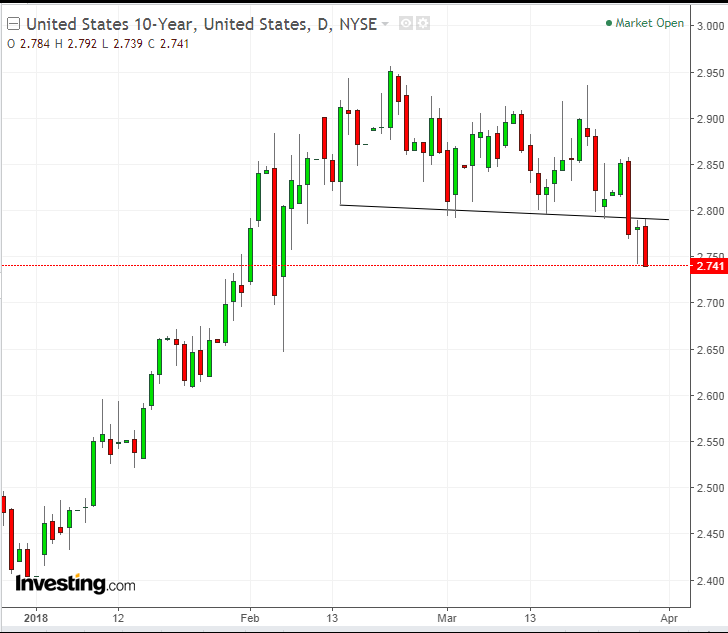 One way to reconcile the haven conflict: gold and the yen weakened on a , but yields provided a downside breakout, as investors, enervated by , rotated out of equities and into the security of sovereign bonds, supporting our view of a deeper correction ahead.

Technically, stocks have been consolidating. This could either be investors testing the waters before the next leg higher, or getting ready to jump ship. Bulls continue to buy, bears keep selling. The winner is the last one standing, resulting in a consolidation breakout. The direction of this breakout will signal the next move.

Both the S&P 500 and the Dow are forming pennant continuation patterns, on top of the uptrend line since the February 2016 bottom, 200 dma and perhaps more important, the February lows. A downside breakout will likely create a second lower trough, forming an official top and signaling a trend reversal, heralding a much deeper correction. 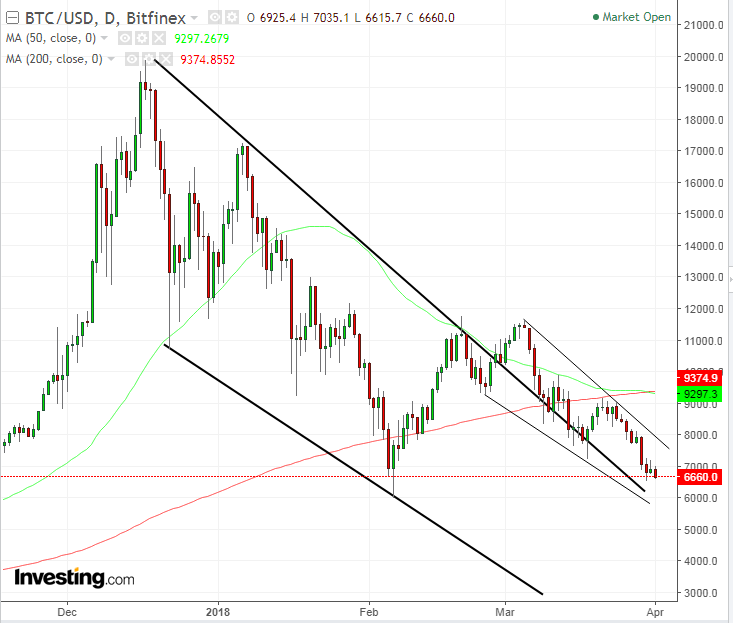 With Twitter (NYSE:) this past week joining Facebook (NASDAQ:) and Google (NASDAQ:) in banning ads for cryptocurrencies, digital tokens slumped further. While remains above its Falling Channel since its 20K record in December 2017, it’s trading within a down trend since completing a double top in early March. As well, it just executed a Death Cross, when the 50 dma (green) crossed below the 200 dma (red). This demonstrates that prices are falling relative to earlier prices, something that’s closely watched by traders.

The digital currency’s price seems to be about to retest the February 6 low of $6,000. A lower trough would resume the main downtrend. 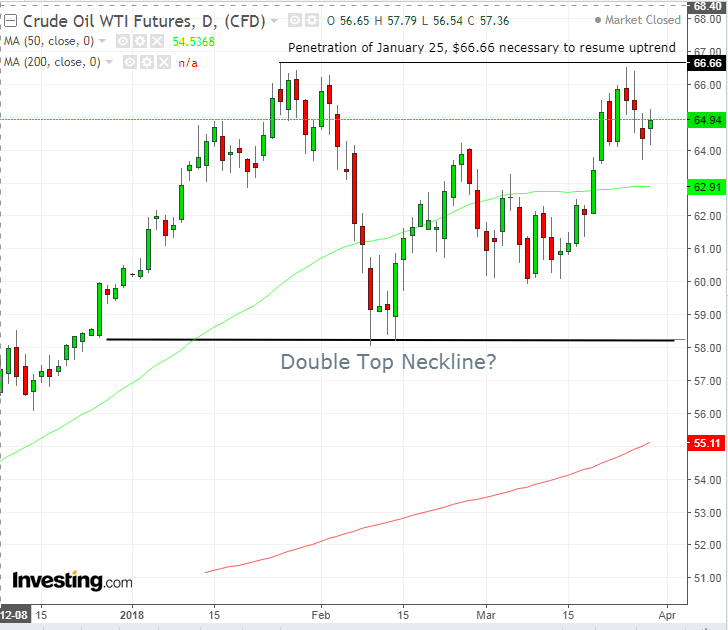 closed 5 cents below $65 on Friday. Despite recent rising stockpiles, geopolitical uncertainties have supported prices. A potentially interesting future development could be coming from China which is establishing a futures oil contract denominated in . This might undermine and weaken the , currently the global reserve currency and the FX of choice for oil (and other) markets. 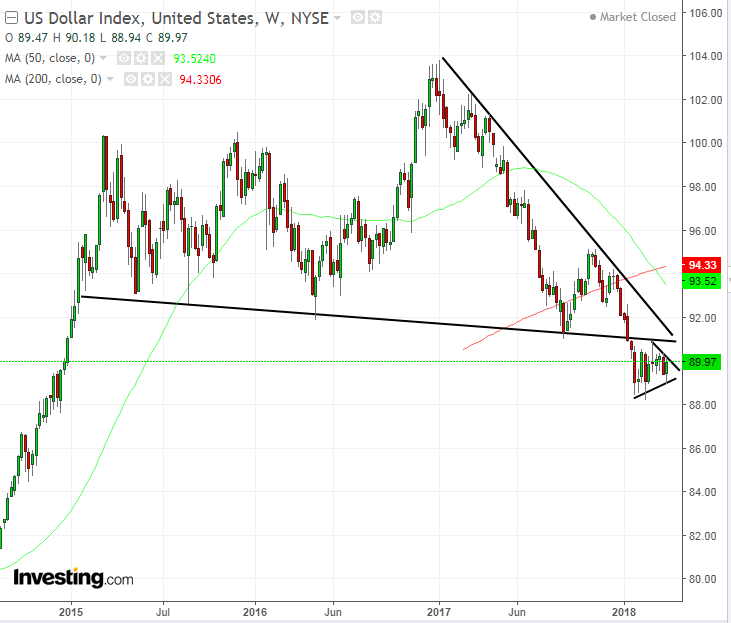 Will a lower trade deficit actually help the and markets, which have been riled by a looming trade war? If not, would a plunging dollar render this geopolitical concern moot?

The dollar has completed a massive, 3-year top. Since the beginning of the year it has been developing a continuation Symmetrical Triangle, beneath the resistance of the top, strengthening the possibility of a downside breakout. The implied smaller triangle’s target is 85.00, while the 3-year top is eyeing the 2014, 79.00 low.