Oil surged on Friday, jumping 6.8% as analysts began noting glimmers of light at the end of the economic dark tunnel created by the COVID-19 pandemic and related lockdowns. China’s April figures while US shale output was cut more rapidly than expected and OPEC’s Secretary General, Mohammed Barkindo said the cartel was “cautiously optimistic that the worst is behind us.”

Stocks jumped in response, paring a weekly decline as the commodity-related news outweighed the worst US numbers on record and reignited trade tensions between the world’s two largest economies.

finished trade on Friday just shy of $30, closing the week a mind-boggling 19% higher, gaining an astonishing 73.7% over the last three weeks. 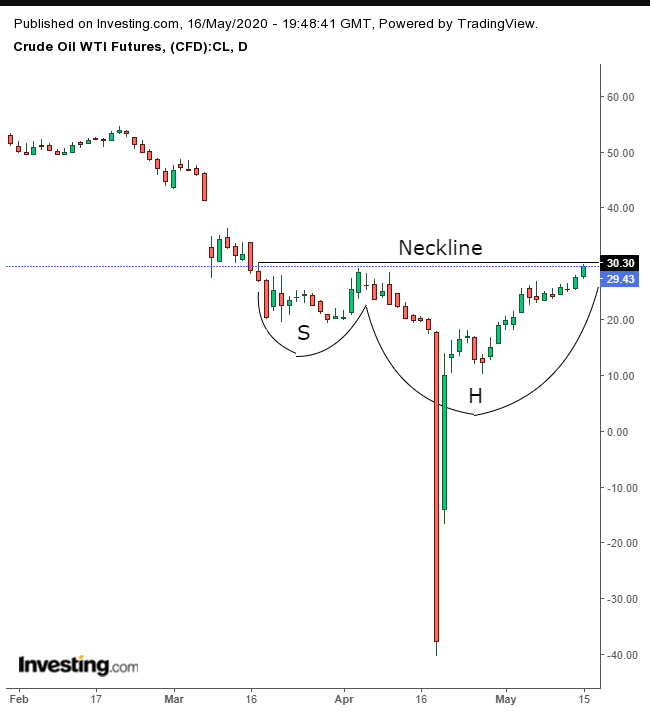 The following chart interpretation is a bit more speculative than our usual technical analysis. Call it experimental.

First, it incorporates negative pricing, something that has never happened before for oil, and for which we therefore have no statistics. Second, because of this abnormality, we are taking liberties with drawing the chart. If we were to ignore that pricing was negative, we’d have a $70 pattern height from low to high, implying an equivalent advance beyond the neckline.

But of course, such a call sounds like a bad joke in the current crude oil and economic environment. Therefore, we will ignore subzero pricing and consider the April 28, $10.07 low as the head of a H&S bottom.

That means that we have no right shoulder yet. The $30, where we drew our neckline, would be as likely a level as a resistance as any to push back prices and form the right shoulder. Indeed, we think this pattern better represents the market structure than our earlier interpretation, .

Despite Friday’s dubious equity rally, the dropped 2.25% for the week. The retreated 2.85%, registering its worst weekly decline since the week that ended on March 20, when the mega cap benchmark bottomed. 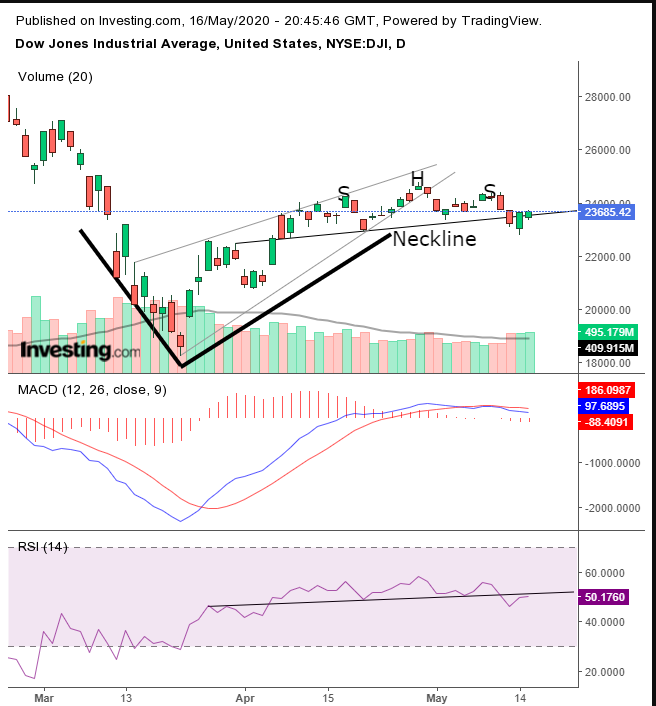 The rally that started following the V-bottom (thick black lines) is fighting for its life. It slumped out of a rising wedge (gray lines) and is currently clawing onto the neckline of a H&S top. Still, we note the high volume of the past two days, suggesting the bounce has some oomph.

Nevertheless, both the MACD and the RSI increase the likelihood that bears will win this battle and retest the March lows, as the rising wedge implies.

This past week, the worst in eight for equities, was, however the best for those stocks that outperformed because of COVID-19, such as Nvidia (NASDAQ:) and Netflix (NASDAQ:). Both finished the week at all-time highs.

And irrespective of analyst hopes, hard data keeps insisting that the US economy is not recovering. Both the most recent and retail sales releases showed the worst declines on record. The global economy isn’t faring any better: Germany, the economic steam engine of the EU, has already slipped into recession while China’s data suggests a long recession ahead.

As well, the escalation of the diplomatic rift between China and the US—the world’s two mightiest economies—would slow the global recovery even further.

Relations between the two economic superpowers headed toward a bonafide cold war, after the White House said it plans to block semiconductor shipments to Huawei Technologies. China that it would retaliate.

This followed the pressuring of a US federal retirement fund not to invest $600 billion in an index that included Chinese stocks. Plus, to make sure his intentions are completely clear, President Donald Trump told reporters that he doesn’t want to speak to Chinese President Xi Jinping right now.

Like stocks, yields, including for the Treasury note, rose on Friday though they were down for the week. 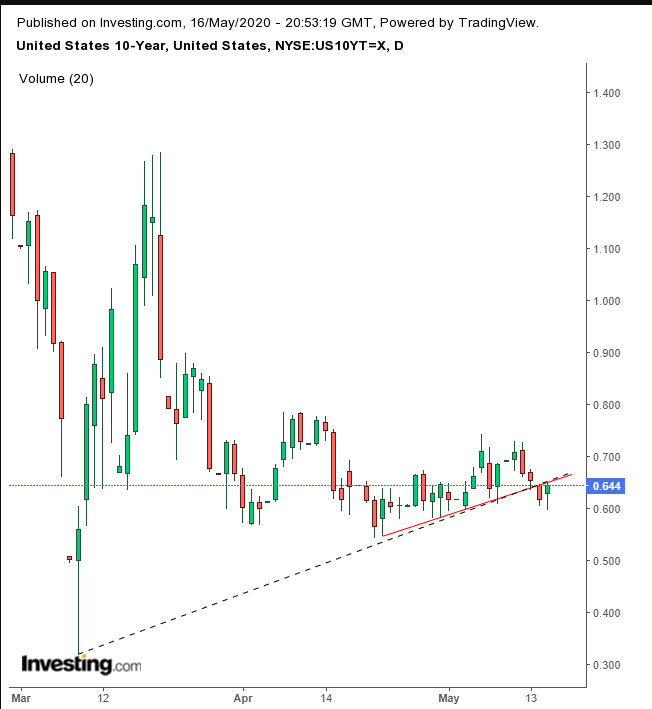 The benchmark Treasury note, on Friday, found resistance by its broken (red) uptrend line since the April 21 low, which remarkably—and symmetrically—matched up with the March all-time low (dotted black line).

The retreated slightly. On Thursday it neared the top of the congestion since April 1, before falling back. 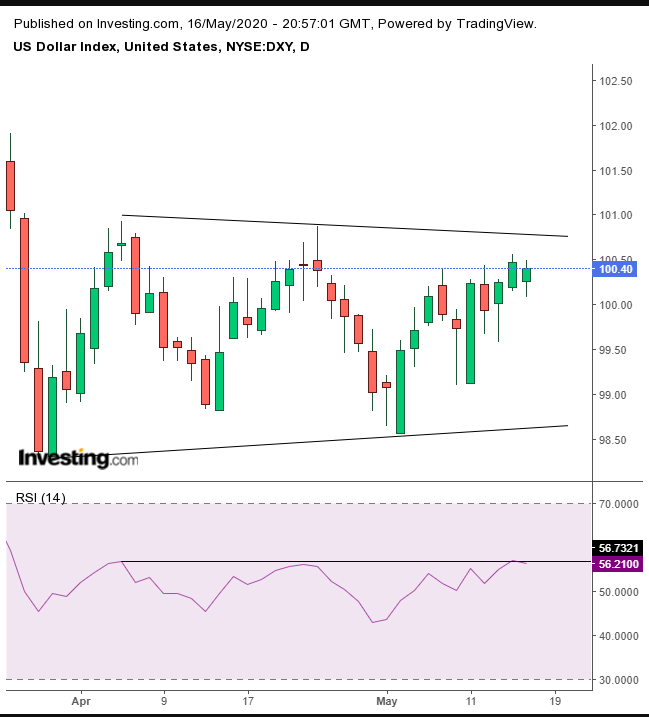 The RSI curved below the top of its range in the same period, demonstrating that the price hit resistance.

climbed for the fourth day in a row, to its highest finish in a month. 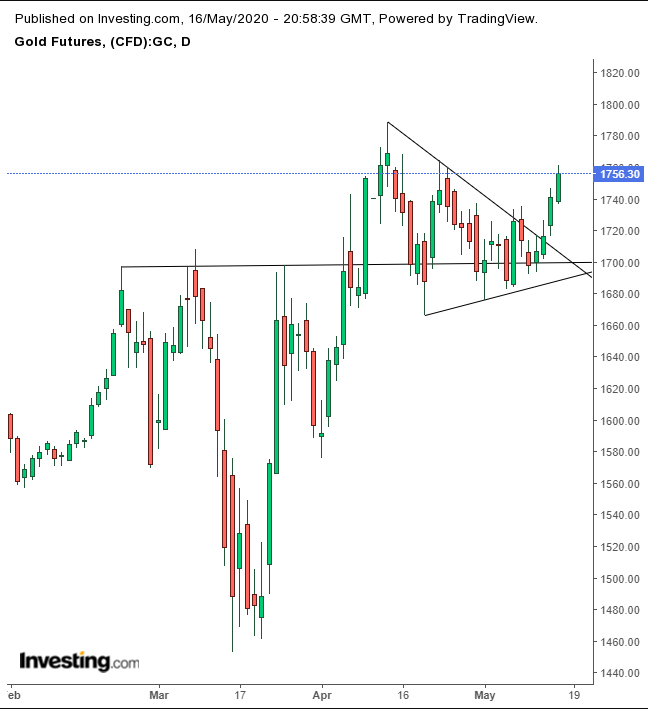 The run on the precious metal occurred after some investors weren’t convinced that rising oil prices would spur an economic recovery more than, say, improved industrial production and retail sales. Technically, the rally extended an upside breakout to a symmetrical triangle, completing the return move to a H&S continuation pattern.

For a second straight week, held above the falling channel in place since the June 2019 top. 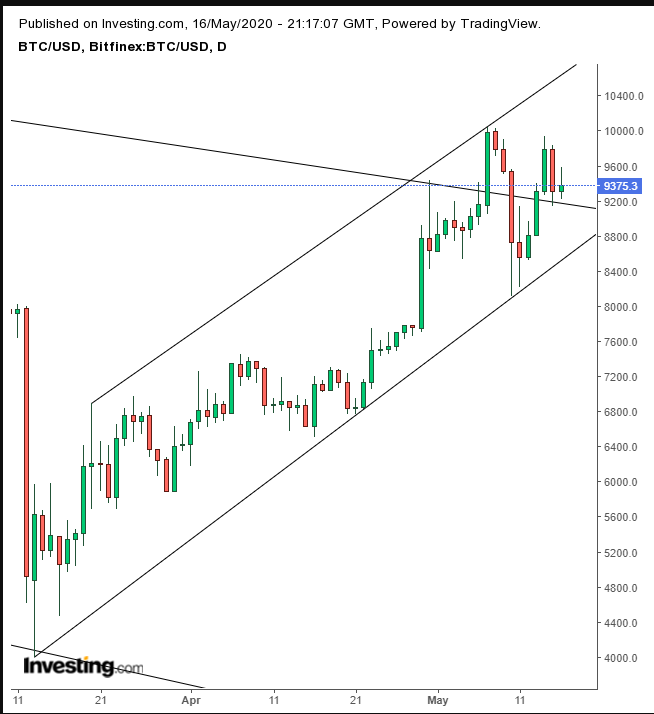 From a technical perspective, however, the cryptocurrency completed a bearish engulfing pattern on Thursday, at the same levels as the May 7 highs, demonstrating there might be sufficient supply to push the price back into the falling channel. However, it would have to fall below the rising channel since the March 13 bottom, to enter a sustained selloff.

Elon Musk, the controversial and very outspoken CEO of Tesla seems to have more faith in Bitcoin than he does in the Fed’s stimulus, and that’s not meant as a compliment to the cryptocurrency. In explaining to Harry Potter author JK Rowling how the digital currency works, he said that “central bank currency issuance” makes Bitcoin look “solid by comparison.”