Treasury yields touched their highest point since February 2020 on Friday and US stocks finished the trading week mixed as investors indicated they’re questioning the implications of inflation on equities and gold. That sentiment will likely continue into the new trading week.

Oil slipped below $60 a barrel at the close of the trading week, as US production started to come back online.

The Index was the only major US benchmark that closed in the red, (-0.2%) on Friday. Traders are beginning to worry that rising yields could provide competition to stocks. With near-zero interest rates in force over the past year, providing no return, some of the recent demand for stocks has been coming from traditional bond investors. Even conservative equity investors were forced to increase their exposure to risk as the US stock market kept escalating in value.

Now, with rising yields, the chances the Fed will begin lowering its asset purchases, reducing liquidity, are starting to increase. This Fed easing initiative has been fueling stocks past what some—including us—believe are rational levels.

As well, ahead of the weekend, while the added just 0.07% of value, the small cap —whose listed domestic firms were boosted by the reflation trade—surged 2.05%.

Though all four major US indices posted record highs last week, with the exception of the , they all closed lower. Technically, even the Dow’s weekly trading produced a high wave candle, connoting confusion and fear, a state of investor psychology that makes the situation ripe for a pullback.

The NASDAQ Composite looks even worse. 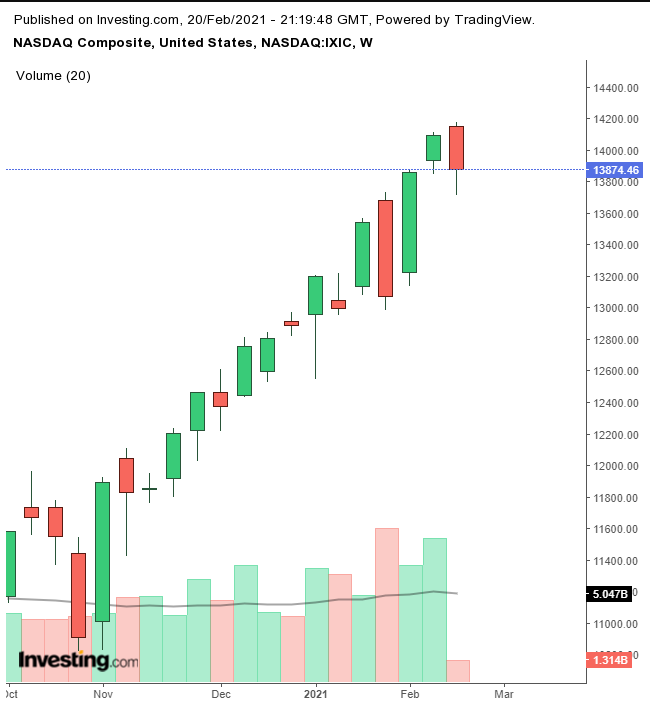 The tech-heavy index opened higher but closed lower than the previous week’s real body—the price range between open and close—forming a Dark Cloud Cover: the bears put down their cards, but the bulls had the better hand. The silver lining is that the long, red candle was on low volume, suggesting the selloff wasn’t driven with wide participation and therefore doesn’t represent the trend.

Fresh stock market records came as ongoing negotiations for another stimulus package by legislators in Washington kept the possibility of more fiscal aid in the news cycle, compounding the overall optimism already being driven by the ongoing vaccine rollout and economic data that dipicts an economy with some rough spots, but still able to withstand the pandemic and is prepared for growth once economies reopen.

last week showed 5.3% growth in consumer spending in January on a MoM basis, the strongest figure since the fall and almost triple the growth of the two previous months. This surge in spending is probably a combination of easy-money from earlier government stimulus and relief-spending by consumers after being constrained by lockdowns. (Renewed lockdowns in some regions during February will be reflected in the next release).

This data is important for two reasons: First, consumer spending is responsible for a whopping 70% of economic transactions, which—in a Keynesian economy—is how we measure economic output; and second, it helps understand the current spike in yields, which are responding to expectations of rising inflation, as investors dump current notes to free up cash for upcoming issues with what they expect will be higher yields. 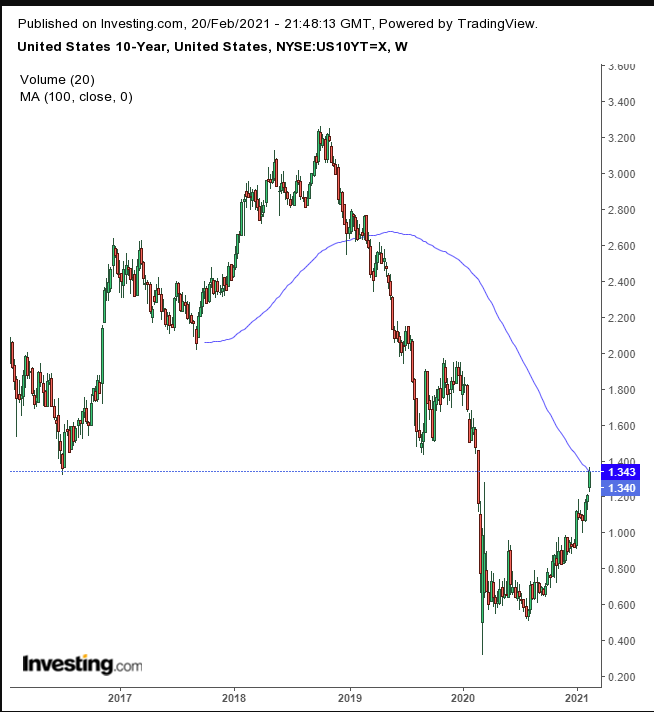 Yields, including for the benchmark note, advanced for the third straight week, surging 13 basis points, the biggest weekly gain in six weeks. Rates closed at the highest level since Feb. 25, 2020. Yields were even higher but were pressured lower by the 100 WMA and the July 2016 trough.

The slumped on Friday for a second day, despite rising yields over the same period. The two tend to have a positive correlation, which seems to have broken down. 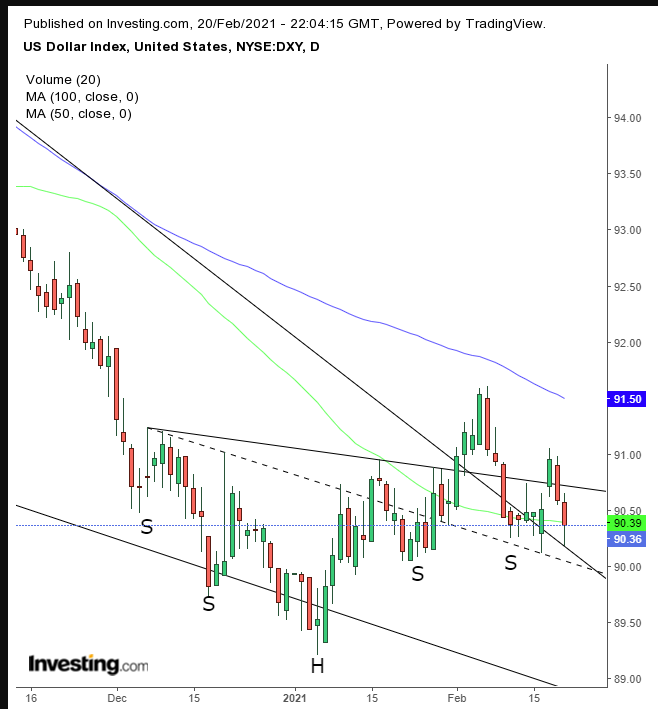 The dollar has been trapped between the 100 and 50 DMA, as the price struggles to find direction. The greenback completed a H&S bottom but fell back below the neckline. Note, the price is wobbling between our interpretation of the neckline (solid trendline) and an alternative trendline (dotted line). For now, however, the price seems to have found support above the falling wedge since the March top.

A two-day dollar selloff wasn’t enough to boost , and reverse it back into a rally. 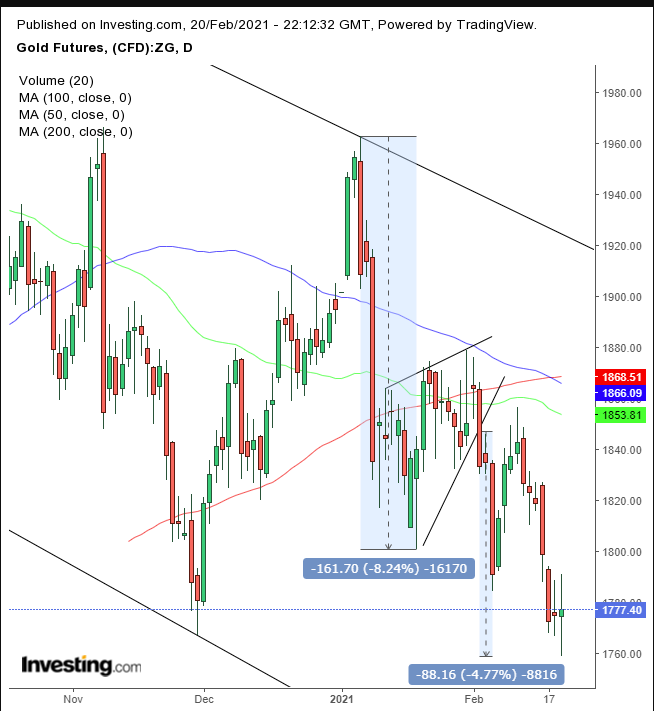 Rather, the yellow metal edged higher, weakly. Note the two repeated high wave candles, showing traders were pulled in both directions: weak dollar boosting gold, while raising yields siphoned away investors from one safe haven asset to another, which acted as a headwind. The precious metal registered a trough lower than the previous one posted on Nov. 30. However, the higher close may signal a rebound.

However, consider that the price action is taking place within a falling channel, and what’s more, the 100 DMA dipped below the 200 DMA, completing a bearish MA formation, in which each shorter moving average is below longer counterparts. Finally, the last piece of the puzzle in our bearish view is that the price achieved just over half of the implied target of the rising flag that developed in January.

, it appears, is on an accelerating, one-way trajectory to the moon. 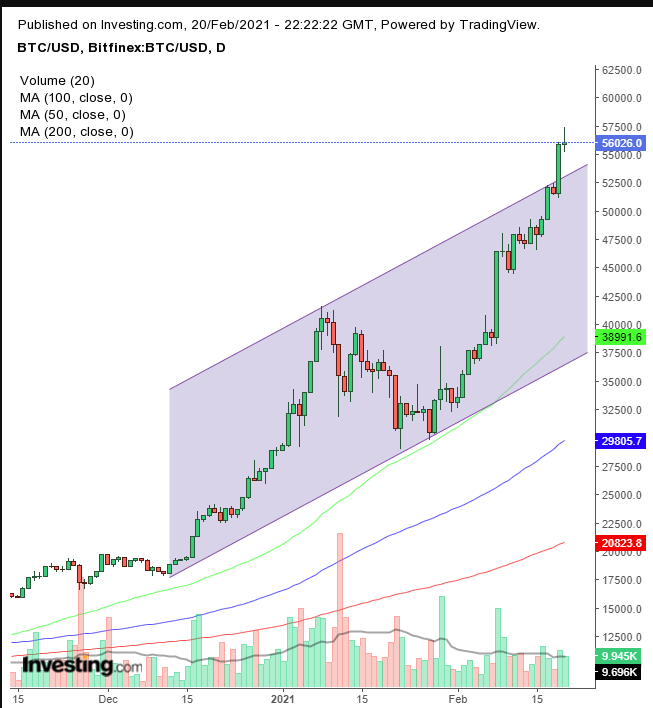 On Feb. 17 we cautioned that the cryptocurrency seemed primed for a pullback, but investors just kept bidding it up. At that time the price was $51,555. It’s now trading just over $56,000.

After the price dipped below today’s high of $57,532, the candle that’s developing is a doji, a sign of a potential reversal, as the rally loses steam. But how many times can we repeat the same thing? Still, volume has been diminishing, which demonstrates thinning participation in the rally.

After the digital token’s 100% surge since just the start of the new year, even enthusiast Elon Musk, founder and CEO of Tesla admitted, as reported yesterday—perhaps apologetically—that the price of the cryptocurrency, which now has a market cap of $1T “seems high.”

dropped back below $60 on Friday, as oil refineries in Texas began resuming production operations. Still, it may take weeks for production to recover. Over the longer haul, analysts at JPMorgan expect an improving global economy as well as OPEC+’s continued lid on production will help boost oil prices by an additional $10 or so a barrell going forward. 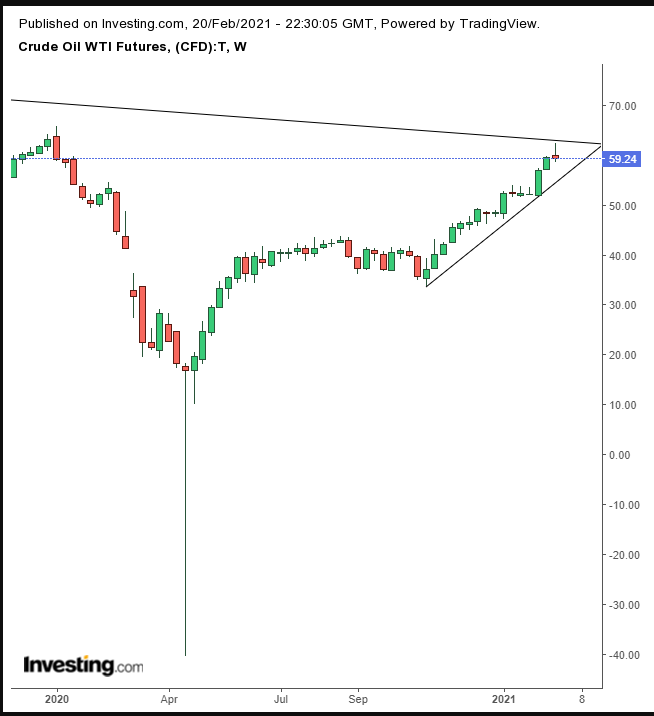 Oil found resistance by the falling trend line since the 2008 peak, forcing the price to develop a shooting star, a bearish pattern that projects an attempted bearish advance was thwarted by stronger bulls. The bearish candle below the super-long downtrend line is significant.

10:00: US – : the central bank president presents the semi-annual, to Congress.