Week Ahead: Volatile Yields In Lead-Up To NFP Report Could Test Market Resolve

Friday proved to be a day of contradictions for both the equity and bond markets, a situation that could extend into this coming week’s trade as well.

Most US stocks slumped for a second day on Friday, as well as for the second week in a row. However, the tech heavy jumped 0.6%, and the small cap climbed 0.3% to finish the trading week. It’s ironic that these two indices were the only ones in the green at the same time as they represent opposing themes and therefore generally move in opposite directions.

The market message at this point is unclear. Since tech shares have outperformed during the pandemic and related lockdowns, the sector tended to lead when it seemed like COVID-related restrictions were returning. And since growth stocks performed poorly during the same period, they have had a tendency to outperform when a sense of returning to ‘normal’ dominated the market mood, when vaccines, a slowing number of virus cases, stimulus or data supported the view of a reemerging economy.

However, now that both indices were gainers, albeit with tech even moreso, we’re not sure what it all means, if anything.

Friday’s other noteworthy phenomenon: Treasury yields, which had been surging, dropped back below 1.5%, erasing most of Thursday’s jump. The market narrative says this corresponds to the easing global tech rout.

In truth, there’s little continuity to these market narratives. Tech stocks—as well as the broader market—have dropped over the past two weeks, though they rallied during the two weeks prior, even as yields gained during all four weeks. So, while the rise during the earlier two weeks was attributed to reflation, which is expected to lead to a growing economy and translate into company profits and more jobs, the slump over the recent two weeks is attributed to fears of inflation, as yields gained, providing a headwind to a recovery.

The short version: for the first two weeks yields rose on the outlook that rising inflation would help the economy grow, while the last two weeks saw climbing yields as a disruption to an expansion. It’s unclear what the messages behind these contradictions are.

However, here’s what we do know: 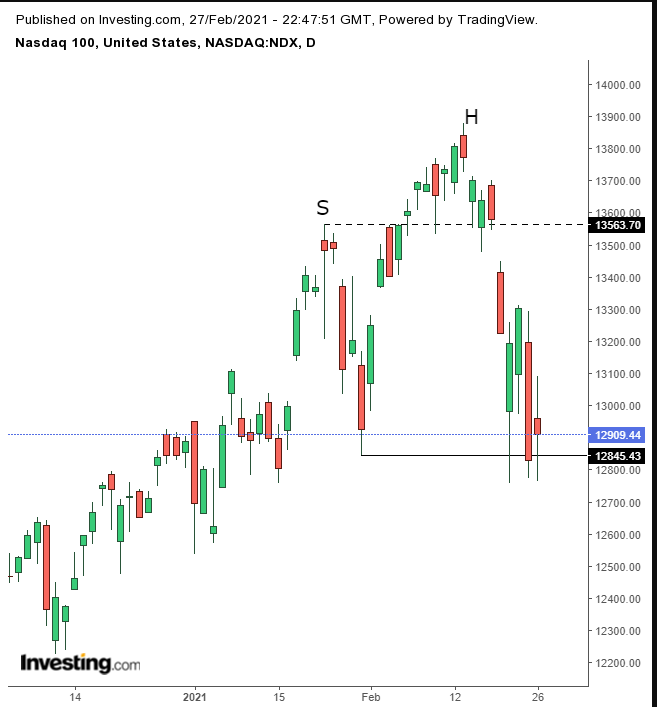 The NDX was struggling to keep its head above water, meaning the lows since January. However, even if the tech-heavy index rebounds, it’s still at risk of topping out, as it forms a H&S top.

Shares of Microsoft (NASDAQ:) and Amazon (NASDAQ:), which gained 1.5% and 1.2% respectively on Friday, helped lift the NASDAQ 100 about 0.6%. Energy producers and banks were among the worst performers, dragging down the .

Interest rates were perhaps the primary focus last week, as the advance in Treasury yields steepened, jolting both stock and bond investors from a stupor. Bond volatility spiked to the highest level since April of last year, spilling over to other asset classes.

Yields, while still very low from a historical perspective, have marched steadily higher over the last two months on the prospects of an economic boom, or a rapid V-shaped recovery with accelerating inflation materializing later in the year. But as stated above, the narrative has shifted from rising yields being good to bad.

Though Federal Reserve Chairman Jerome Powell said, during his to Congress on Wednesday, that higher yields are “a statement of confidence” about the recovery, there is an inflection point. Expectations for faster economic growth deepening the bond selloff could disrupt equities for two reasons: first, given that the near-zero interest rates contributed to some of the most fantastic stock gains in history, rising rates could put a stop to that, and second, some of the recent demand for stocks has been coming from traditional bond investors—conservative institutions and estates—who turned to stocks absent significant bond yields. However, the return of yields may pull them back, especially considering that such an exodus may also shock waves through markets, triggering a case of self-fulfilled prophecy.

The question investors will have to keep asking themselves is at what point does good news for the economy mean bad news for the market on a consistent basis. As we’ve seen time and again in previous months, and as recently as January’s release, the negative surprise sent stocks higher on speculation that a miss for jobs creation would make additional stimulus more likely.

There is the argument that bad news = good news is a phenomenon that perhaps occurs at the end of multi-year economic growth, when great data increases the odds for the Fed to begin tightening as a way of keeping things from overheating. However, considering we’re coming out of the worst recession since the Great Depression, the Fed is not expected to intervene on escalating growth for the next couple of years. 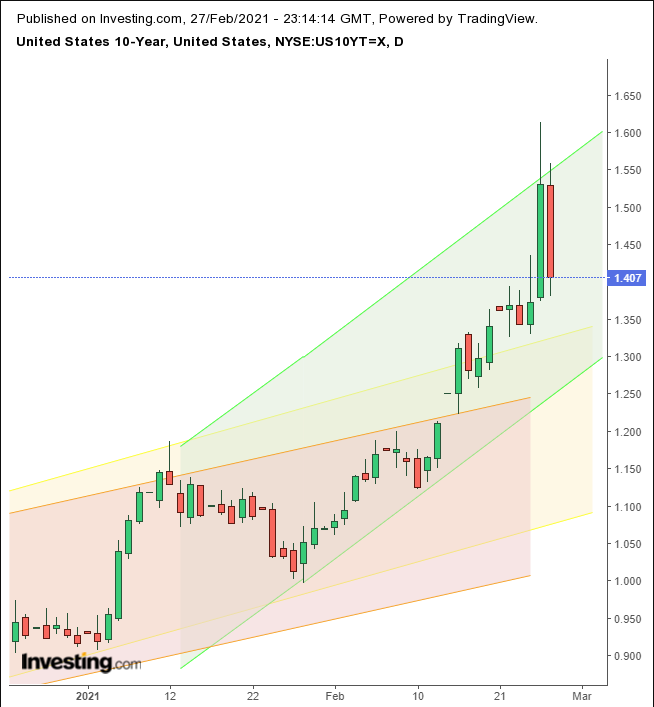 Yields have fallen after their angle for ascent steepened. This occurred after rates began trading within a rising channel since the August bottom. The bottom of the current rising channel will likely get the support of the previous channel (yellow) at around 1.35%.

The advanced 0.83% on Friday, its biggest jump in a long time. The global reserve currency was boosted by both higher yields and a plunge in commodities, which means less buying of USD based Treasuries. 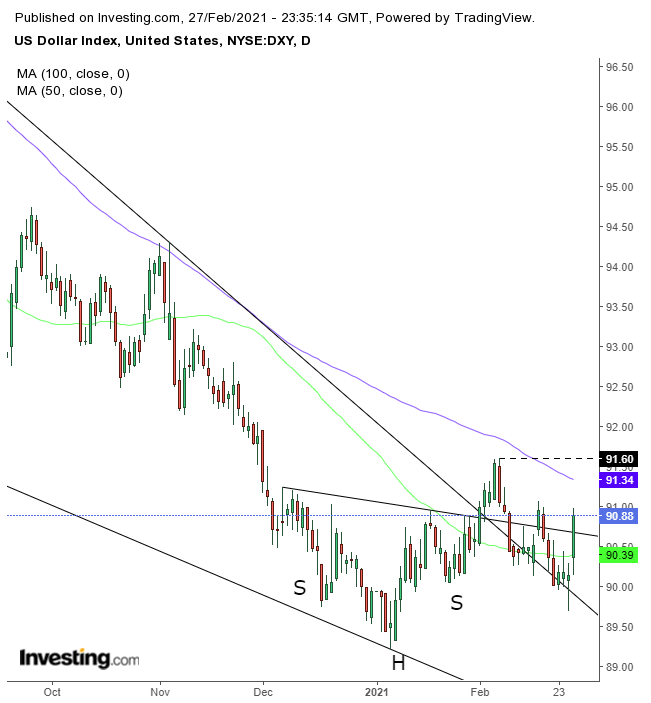 The greenback’s leap took it back above what we interpreted to be a H&S bottom, but more impressively, the price remained above the falling wedge from the March high. While the price overtook the 50 DMA, the 100 DMA rushed to protect the February high. If the price tracks higher, it will post a second peak to complete an uptrend, sealing in the completion to a bullish wedge.

plunged on the rising dollar. The yellow metal has become the wallflower at the ball, during a time when , and have all attracted safe haven seekers. The price of gold fell below the low of Nov. 30, eliminating any hope for a H&S bottom, extending the downtrend that’s neatly bound within a falling channel, something signaled by last month’s Death Cross. This month, the 100 DMA fell below the 200 DMA, putting all three MAs within a bearish formation, in which each longer MA has slipped below its shorter counterpart.

Silver also slumped, but unlike gold, it’s still in an uptrend. 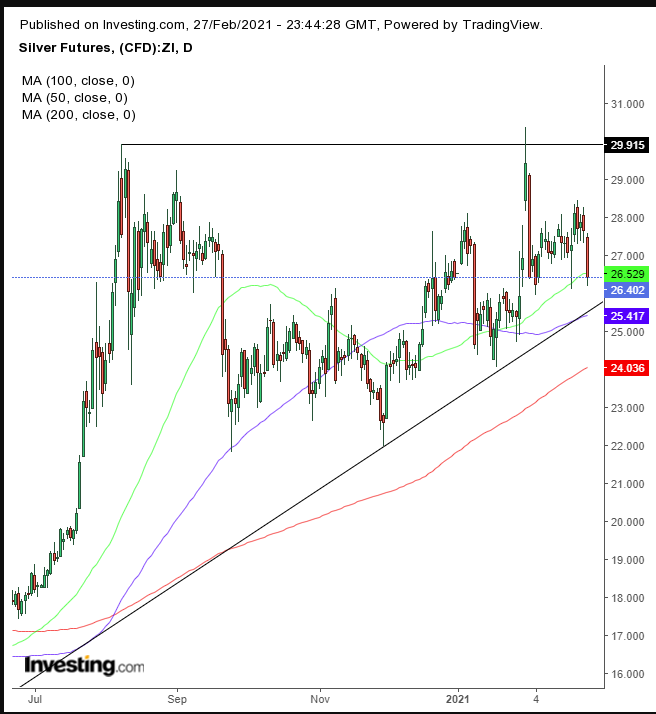 As well, the white metal has been trading along an ascending triangle, in which demand has been gaining against supply, which has remained flat. In this pattern, buyers are likely to absorb all available supply below $30, till they provide an upside breakout, as they raise their bids to find new willing sellers, completing the pattern.

Bitcoin has been dropping for a third day as of Saturday’s trading, though each day’s dip has become smaller, suggesting the selloff could be easing. 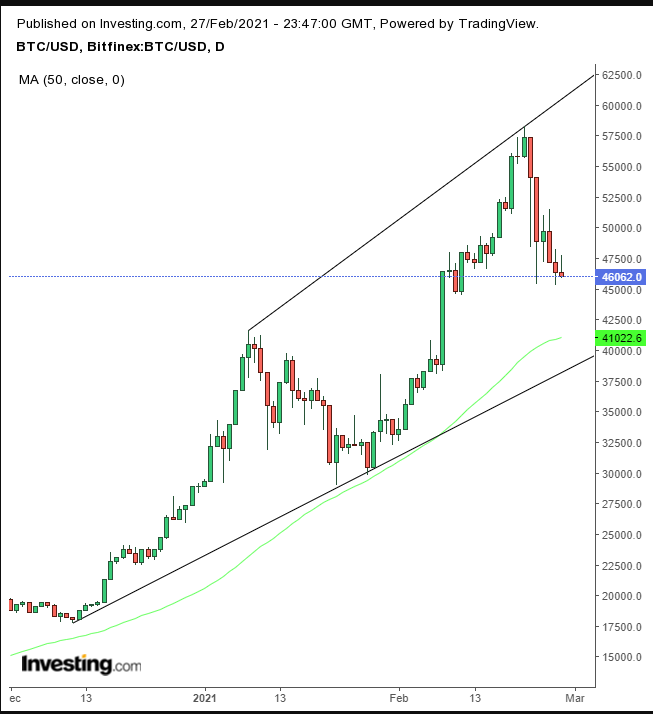 Nevertheless, there is still room toward the bottom of the rising channel, at $40,000. 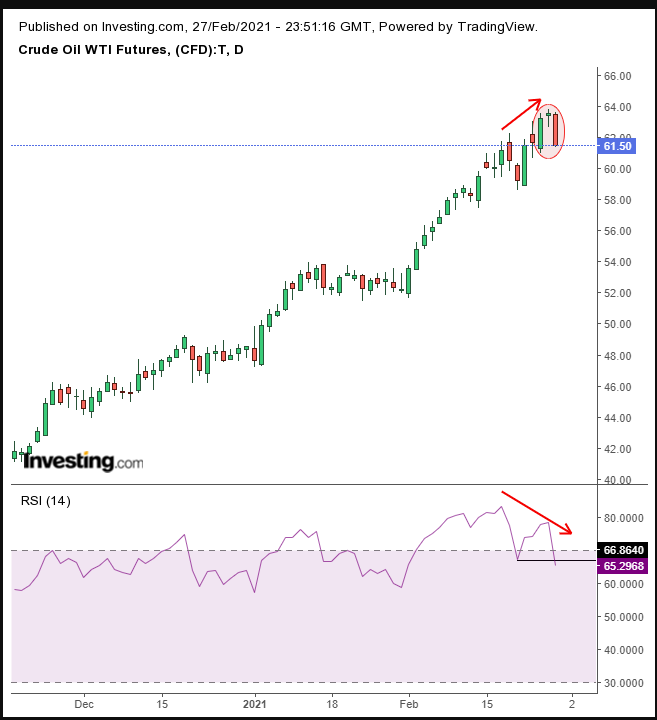 That’s a three-day pattern, denoting a top, as bears return fire to a bullish attack, and the bears are seen as the victors. Notice, the RSI provides a negative divergence.