What To Watch In October FX

The greenback climbed to 13-month highs against the Japanese yen and renewed its rally versus the Swiss franc, euro, New Zealand and Australian dollars. Interest rate differentials played a major role in the dollar’s rise as the Federal Reserve raised the interest rates for the third time this year. There were a lot of big stories that affected currencies this month including trade wars, Brexit and Italy’s debt crisis. The Japanese yen and Australian dollars were hit the hardest in September but last week the biggest losers were the euro and Swiss franc. Sterling was the most resilient but trader positioning was the only reason for the currency’s steady performance. As we look ahead, many of the events that affected currency trade in September will continue to rattle the forex market in October. The UK has a Tory Conference this weekend, Italy’s Economy Minister Giovanni Tria could still resign while US-Canada trade negotiations continue. This means that while some of the major currencies found a bottom in late August or early September, they are still at risk of further losses in the third quarter.

The market’s focus on the direction of US monetary policy is the one thing that could change in October. After raising interest rates by 25bp at their last meeting, the Federal Reserve is not expected to change policy for another 2.5 months. One of the main reasons why the dollar is strong is because the Fed’s dot plot moved in favour of another rate hike in December. In June, only half of the Fed Presidents saw 4 rate hikes this year but now 75% of them support an additional move before year-end. As a result, investors have priced in a 72% chance of another quarter-point lift in rates. However, a lot can change between now and then so data closer to the December 19th meeting will have greater importance than data in October. In other words, this month’s economic reports could have less impact on the dollar. The September ISM numbers and nonfarm payrolls report are scheduled for release next week. Job growth and wage growth were strong in August so a slightly softer number is possible. Even if that’s the case, however, this report alone won’t discourage the Fed from hiking in December. Technically, the dollar has more room to rise with 114.75 being the key resistance for .

The biggest problem for the euro is Italy. The single currency was hit hard on Friday after the newly elected populist government decided on a 2.4% deficit target for 2019. Both the EU and the country’s finance minister had hoped to keep the budget between 1.6% and 2% of GDP, but the coalition defied their wishes by agreeing on a much higher budget deficit. In response, Italian stocks collapsed and yields spiked higher. The euro was casualty of these moves because investors are worried that this decision will lead to more trouble for Italy. While the new deficit target is still below the EU’s 3% limit, the decision to go against Finance Minister Tria’s recommendation could prompt his resignation. As an independent economist his appointment was a move to reassure the markets so a resignation could cripple the government. Italy’s President has already asked Tria not to resign to in order to maintain stability and he’s likely to stay on but until he makes an official announcement the uncertainty could keep euro under pressure. If we look beyond Italy’s troubles, German business confidence improved, leading to lower unemployment in the month of September. ECB officials have also been more vocal about price pressures. At the start of the week. ECB President Draghi said he sees a relatively vigorous pick up in underlying inflation and on Friday, ECB member Lane said wage data is increasingly positive. This means that when we hear from the ECB at the end of October, their comments on inflation should be more hawkish. Fundamentally, euro should take its cue from risk appetite, Italy headlines and the US dollar as there’s not much in the way of market-moving Eurozone data next week. Technically, as long as remains below 1.1650, the path of least resistance should be lower.

Of all of the major currency pairs, sterling’s movements were the most limited this past week. The lack of data and positive or negative Brexit developments kept confined within a tight range. With that in mind, GBP traded with a negative bias because second quarter GDP was revised slightly lower. One of the main reasons why sterling has not fallen alongside EUR and AUD is because short sterling positions are at their highest levels since May 2017 so everyone who wants to be short probably is. Next week is an important one for the UK because there’s a Tory Party Conference that ends with a speech by Prime Minister May in the middle of the week. The UK government has rejected the EU’s border proposals and their unwillingness to bend on border terms has made negotiations difficult. With this in mind, Brexit headlines and UK PMIs will have a big impact on sterling this week – our bias is to the downside as May is expected to maintain a hard-line approach while UK manufacturing activity is expected to have weakened in the month of September.

The Australian dollar will be in play this week with a Reserve Bank meeting on the calendar. After the US imposed fresh tariffs on China, has been unable to rally and we’re not sure how much the RBA can help. Last month despite the central bank’s optimism, AUD/USD hit fresh 20-month lows. Although the central bank ignored the increase in mortgage rates and focused on the progress in the labour market and inflation, currency traders latched onto their outlook for steady rates. The RBA made it clear they don’t see a move in the cash rate anytime soon and despite improvements in the economy, this view is not expected to change in October. Since their last meeting, we’ve seen both improvements and deterioration in Australia’s economy. GDP growth, labor market activity and business conditions increased while consumer confidence, the trade balance and the PMI indices declined. The external environment worsened with the trade war between the US and China intensifying. So the RBA has no reason to change their outlook. Regardless of the reaction to the RBA, what’s more important is the fact that monetary policy will remain steady in Australia for the rest of the year and with the Fed expected to tighten again, the downtrend in AUD/USD should remain intact. Retail sales, the PMI manufacturing and services reports are also scheduled for release. 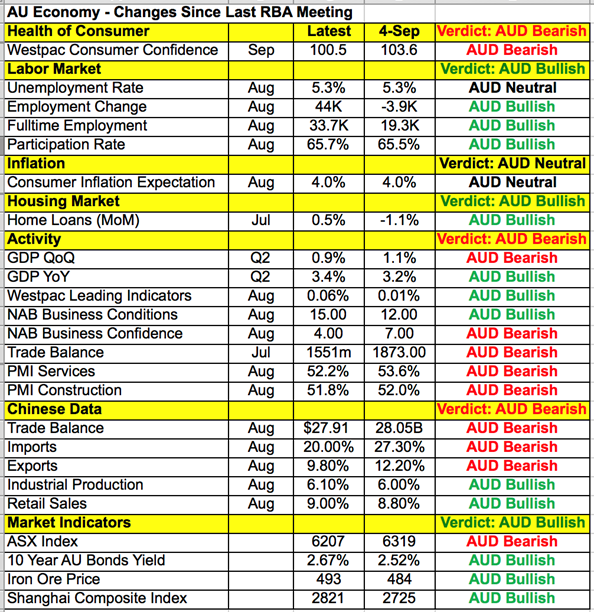 Meanwhile, the New Zealand dollar sold off after the Reserve Bank of New Zealand left interest rates unchanged. Although the RBNZ said they see early signs of core inflation rising and expect growth to pick up in the coming year, they felt that downside risks remain so monetary policy needs to be expansionary for a considerable period of time. Not much has changed in New Zealand and as a result, interest rate differentials, which have just moved in favour of USD, pushed the pair lower. In the week ahead, there are no major New Zealand economic reports on the calendar so NZD will take its cue from risk appetite and the market’s demand for US dollars.

Canada failed to reach a trade deal with the US this past week and all signs point to President Trump moving forward with Mexico alone. However, instead of falling, the soared on Friday as investors looked past the trade disappointment to the prospect of a rate hike from the Bank of Canada this month. The belief is that Canada will reach a deal with the US eventually and in the meantime, underlying fundamentals support the need for tightening. Despite the trade tariffs, Canada’s economy is doing well and GDP growth was stronger than expected in July. BoC Governor Poloz even said that uncertainty shouldn’t prevent rate hikes. Next week’s Canadian IVEY PMI and labour market reports should reinforce the case for tightening because a recovery in job growth is expected after last month’s sharp decline.