Where To Hide? That’s The Next Million-Dollar Question

Tuesday, Sept. 18: Five things the markets are talking about

U.S. President Donald Trump has imposed an additional 10% tariffs on about $200 billion worth of imports from China, which will rise to 25% by the turn of the new year. Trump has threatened additional duties on about $267 billion more if China contemplates hitting back on the latest U.S. action, beginning next Monday.

Of course, China is going to retaliate, but how, is part of the guessing game – “to protect its legitimate rights and interests and order in international free trade, China is left with no choice but to retaliate simultaneously.”

There are a few tech exceptions – which benefit Apple/Fitbit for now – and the tiered deployment is to help U.S. companies find alternative supply chains. However, if the U.S. needs to go to phase three, it would consume all remaining U.S. imports from China and Apple (NASDAQ:) products and its competitors would not be spared.

The problem for China is that they do not import enough U.S. goods to go head-to-head with the U.S. leverage strategy. They will want to cause U.S. pain and will probably focus even more on the tech sector. Nevertheless, watch the yuan’s value, it may be one of China’s strongest weapons. It has weakened by about 6.0% in the past three months, offsetting any 10% tariff rate by a substantial margin.

From an asset price viewpoint, it’s been a rather ‘subdued’ reaction to Trump’s announcement. Buying U.S. dollars in response to trade conflicts does not seem to be as appealing anymore. The delay in imposing 25% tariffs may explain the lack of movement, in addition to the fact that the tariffs have been widely anticipated.

In Japan, the rallied overnight to its highest close in seven months, led by insurers thanks to rising U.S. Treasury yields. However, no surprises, capping gains were electronic suppliers, which underperformed as the market weighs the new U.S. China, tariff impact. The index closed out 1.4% higher, while the broader rallied 1.8%.

Down-under, materials and energy stocks pushed equities lower as the escalating Sino-U.S. trade war pressured commodity and oil prices. The fell 0.4% at the close. The index rallied 0.3% yesterday. In South Korea, the stock index closed 0.26% higher along with some of its regional bourses as Chinese markets largely shrugged off trade tariff threats.

In China, stocks staged a late rebound as the blue-chip index rallied 1.9% as some investors bet that authorities will increase their investment in infrastructure to offset the impact of the latest tariff penalties from Trump. In Hong Kong, the closed out 0.6% higher.

In Europe, regional bourses have shrugged off early weakness following the ‘telegraphed’ U.S. tariff announcement after the yesterday’s U.S. close. Autos lead the gains, while the materials sector and consumer discretionary are under early pressure. 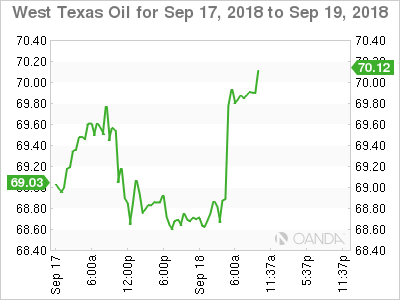 Oil markets have eased a tad as the Sino-U.S. trade war questions the outlook for crude demand from the world’s two largest economies.

U.S. crude ‘bears’ believe that these tariffs are likely to limit economic activity in both China and the U.S. – a hit to growth is a hit to consumption.

However, if the ‘big’ dollar loses its ‘tariff haven’ appeal, expect the ‘yellow’ metal to find support on pullbacks. 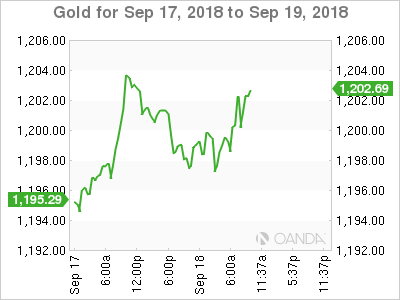 U.S. Treasury yields have backed up along the curve on growing expectations that the Fed could raise interest rates a few more times this year after recent data showed wages spiking last month, elevating concerns about inflation. 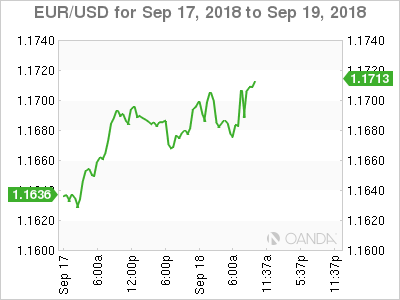 (€1.1680) shows a muted reaction to the U.S. announcement that it will charge 10% on another $200 billion of Chinese imports starting from next Monday. Typically trade tensions have been positive for the ‘big’ dollar; maybe attitudes will change once China shows its hand.

(£1.3126) pulls back from recent six-week highs as the market awaits Thursday’s EU summit.

TRY ($6.3670) continues to weaken, down another 0.7% as investors remain confident in fading last weeks bigger than expected Central Bank of the Republic of Turkey (CBRT) rate hike.

An interest rate increase by the Norges Bank on Thursday is widely expected and already broadly priced into (€9.5406). However, NOK bulls believe the central bank will likely signal more rate increases, which should provide further support for this commodity currency. 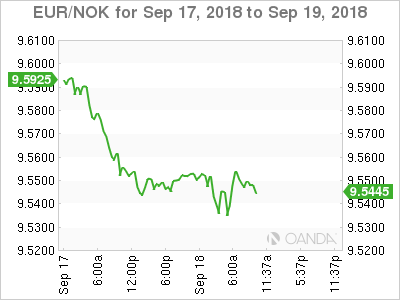 In its minutes released overnight there were no surprises. The RBA maintained its interest-rate guidance in the minutes from its meeting a fortnight ago, reiterating that increases will eventually come amid anticipated economic strength.

RBA also noted that a number of G10 central banks, including the Fed, were expected to continuing rate hikes. This had been reflected in the markets, “most notably a broad-based appreciation of the U.S. dollar” that “raised risks” for some, especially for “fragile emerging” markets. However, “the modest depreciation of the AUD was helpful for domestic economic growth.” 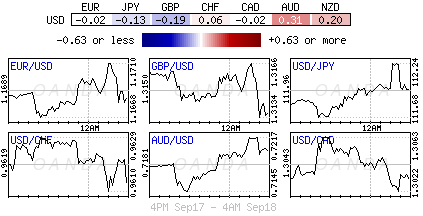