To the gold crowd hoping to read the tea leaves after today’s , here’s a likely synopsis: with rates virtually at zero, focus will probably be on the direct lending plan to companies; whether there should be any optimism for Q2; and what’s the message for Congress, if any.

Since its mid-March emergency meeting, the central bank of the United States has almost matched the White House’s coronavirus stimulus efforts with over $2 trillion of its own for asset purchases, expanded lending facilities and swap lines with foreign central banks. And it promises to do even more. All the debasement that follows will be great for anyone looking for $1,800-and-beyond .

After Powell, Watch The Reopenings

But the catalyst for $1,800-gold isn’t around the corner, or at least doesn’t seem to be. So, when you click Fed Chair Jay Powell off your screen later today, focus on what the yellow metal needs in order to stay in its present, below-$1,750 berth—and move incrementally upward, or even sideways. 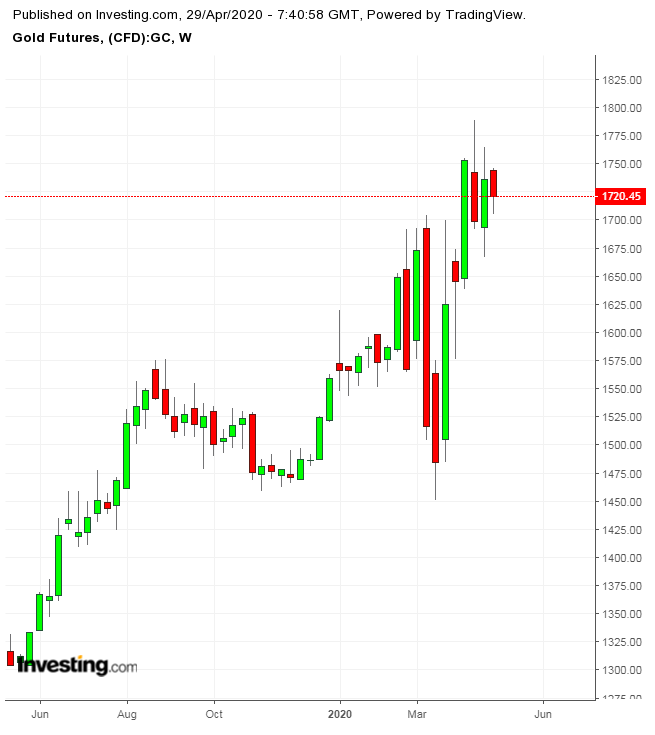 The answer to that are the economic reopenings across the United States, and the world.

Here’s the current snapshot of the U.S. emerging from COVID-19 lockdowns:

The U.S. death toll from the pandemic is, meanwhile, nearing 60,000 while the number of infections has crossed a million.

Potential For More Infections With Reopen

Health authorities warn that increasing interactions and economic activity could lead to more infections just as social-distancing measures appear to be bringing the viral outbreaks under control. And White House health advisor Anthony Fauci says the United States “could be in for a bad fall” if researchers don’t find an effective treatment by then.

All this proves one thing: There’s going to be nothing normal about the emerging new normal. While many may have suspected this, the Trump administration’s insistence to the contrary has enabled Wall Street’s to claw back much of this year’s 35% loss to stand just 15% down.

“I think it’s unrealistic to think that we will be able to reopen as we were before. In fact, I don’t want us to,” says Jonathan Caulkins, professor of operations research and public policy at Carnegie Mellon University. “But society can, and should, make changes now to ease the transition and help the economy.”

“Yet if you walked through both a typical restaurant kitchen and a manufacturing floor, you would see that many kitchen workers are forced to work much more closely to each other than on a factory floor.”

A prolonged struggle to get Americans back to work and the economy to reopen will likely frustrate the Trump administration’s hopes of avoiding in the third quarter what looks almost certain for Q2: a doomed .

That’s one of the best bets the safe haven crowd in gold can make now.

“In the bigger picture, gold continues to mark time in a longer-term $1640 to $1740 an ounce range, with the shorter-term range probably confined between $1700 and $1720 an ounce,” said Jeffrey Halley, senior markets analyst at New York-based OANDA.

Television footage has shown empty restaurants in many U.S. states that have reopened for business as patrons remain wary of their safety. “Business is 90% down,” said Christopher Hartland, owner of the Cool Springs Brewery in Franklin, Tennessee.

And it’s not just happening in the U.S.

In India, where the central government has started lifting restrictions in areas with few or no known COVID-19 cases, officials are now facing a new challenge: persuading fearful residents, and their leaders, to consider a partial reopening.

While the Indian states of Kerala and Gujarat were quick in moving to reopen shops, other major states like Tamil Nadu and Maharashtra have indicated they would stay shut until at least May 3, when Prime Minister Narendra Modi will decide whether to extend the lockdown or let it expire. Other states have barely said anything.

In Italy, the economic impact of lockdowns could cause public debt-to-GDP to rise to an astronomical 155.7% (from a pre-COVID forecast of 135.2%) and the rate of unemployment to 11.6%. Forecasters estimate that 10 million Italians, a fifth of the total number of adults, will be thrown into poverty, unable to meet essential expenditure on food, medicines and a roof over their heads.

All this augurs well for gold, the safe haven.