Why The RBA May Not Cut Interest Rates

On the eve before the Reserve Bank of Australia’s , the dropped to fresh 4-month lows. President Trump’s threat of tariffs on China triggered Monday’s sell-off but the consensus forecast is for a rate cut this month. We are surprised by this dovish outlook and investors share our view as the market is pricing in a less than 50% chance of a rate cut. They believe that easing will be necessary this year but not until August or later. The idea of a rate cut was sparked by a small tweak in the last monetary policy that suggested the Reserve Bank no longer believes that a rate hike is more likely than a cut. In April, they said “The Board will continue to monitor developments and set monetary policy to support sustainable growth in the economy and achieve the inflation target over time,” which suggested that they are moving to a more dovish posture. The Australian dollar plunged in response.

However we think it is premature to bank on a from the RBA. Since the last monetary policy meeting, there’s been broad-based improvement in Australia’s economy as shown in the table below. are up, , and construction sector activity improved and accelerated. We’ll get the latest and numbers right before RBA but the risk is to the upside given the improvements in manufacturing PMI and the sales component of PSI. Inflation is much lower but other central banks dealing with the same conditions view the downtick in prices as temporary. Based on the latest economic reports the RBA has no reason to appear more or less dovish. Yet with the deterioration rather than improvement in trade tensions between the U.S. and China, the RBA has a lot to worry about. Considering President Trump’s history of walking backs threats, it would be smarter for the RBA to wait for the tariffs to become official before resorting to a rate cut. If Trump’s threat is effective in accelerating a trade deal, a rate cut may not be necessary.

So if the RBA leaves unchanged, could squeeze higher on short covering – though the lasting response will be based on whether they talk easing. If they confirm that a rate cut would be possible this year, we could still see the pair end the day lower. But if they leave interest rates and most of their monetary policy unchanged, disappointed bears could square up, driving the Australian dollar higher. 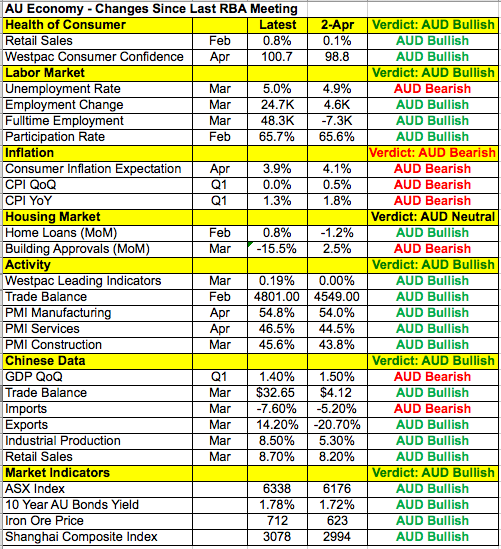