Will Bank Of Canada Drive Loonie To 1.33?

Summer may be over but the sun is shining bright on the U.S. dollar. The extended its gains against all of the majors thanks in part to stronger-than-expected . Despite trade tensions and U.S. dollar strength, the manufacturing sector is performing well with activity expanding at its fastest pace in 14 years. surged, leading to increased production and and the index remains high after a smaller-than-expected pullback in August. As much as economists may worry about the repercussions of a trade war, recent data gives the Fed very little reason for concern. The manufacturing sector is doing well and Friday’s report should show stronger job growth after last month’s disappointment. This could be a good week for the U.S. dollar – especially as the technical picture coincides with the fundamentals. On a technical basis, broke above the 50-day SMA, paving the way for a move up to 112.

The rising is one of the main reasons why we have seen the sell off aggressively ahead of the Bank of Canada’s . While the BoC is not expected to change interest rates, the market is pricing in an 82% chance of a rate hike in October. Which means that if the Canadian central bank is serious about tightening, it will need to set the stage for a rate hike this week. Still, its will to tighten is not clear given the uncertainty of trade negotiations. Don’t forget that the BoC raised rates at its last meeting in July and at the time, Governor indicated that rates would need to increase further because the economy is in a good place. Since then, we’ve seen more job growth and higher inflation. However slowed, continued to fall and weakened. Canadian and American trade talks resume on Wednesday but it could be weeks before there’s a deal. Plus, President Trump hasn’t made things any easier. Over the weekend he said in a tweet that there is “no political necessity to keep Canada in the new NAFTA deal. If we don’t make a fair deal for the U.S. after decades of abuse, Canada will be out. Congress should not interfere w/ these negotiations or I will simply terminate NAFTA entirely & we will be far better off.” Words such as these do not suggest that he’s itching for a deal. So if there are no major changes in the BoC , could continue to march higher until there’s meaningful progress in the trade talks. However if the BoC makes it clear in its monetary policy statement (there’s no press conference scheduled) that rates need to increase, we could see USD/CAD drop back below 1.31. We think the central bank will remain optimistic but refrain from committing to a hike. 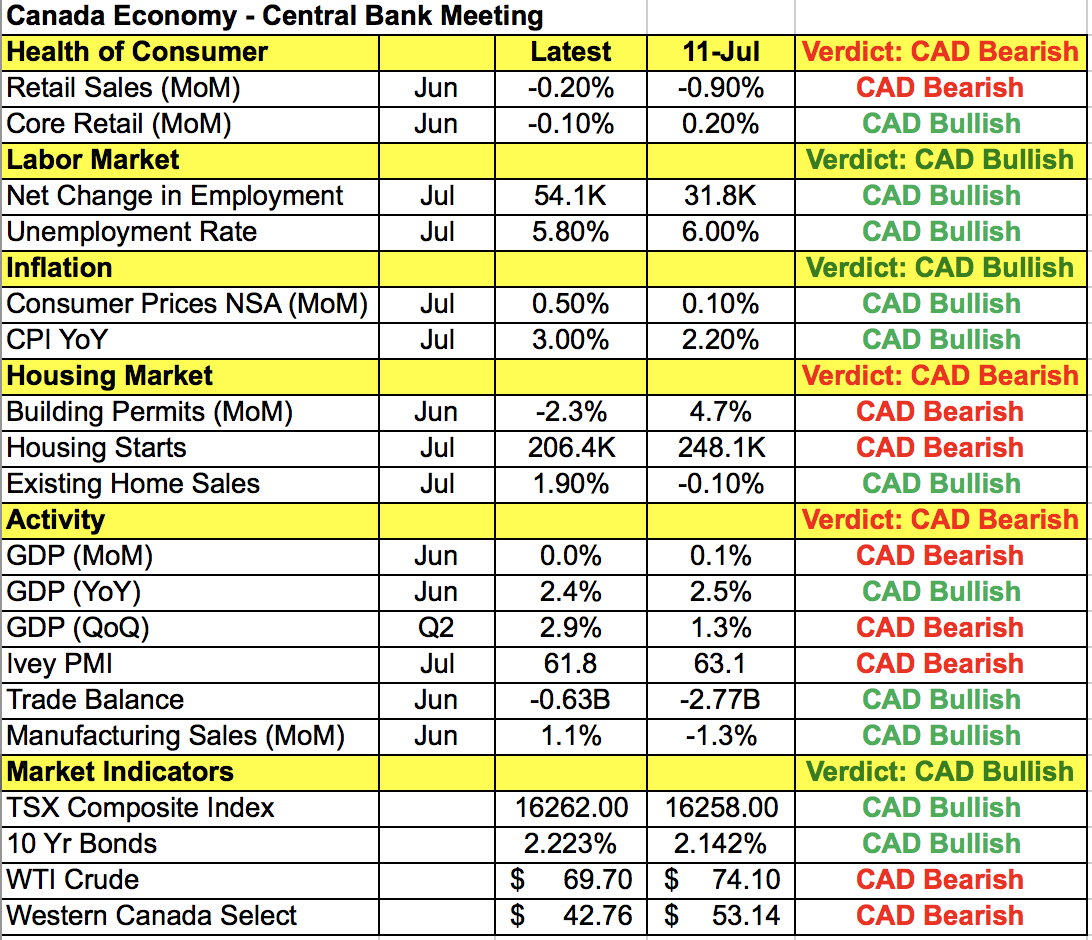 The fell to a fresh 20-month low despite the Reserve Bank’s optimism. At its most recent meeting, the RBA completely ignored the recent increase in mortgage rates, choosing instead to talk about the progress in the labor market and inflation. RBA feels that low rates are supporting the economy, which allowed for above-trend growth in the first half of the year. While there’s uncertainty in the outlook for household consumption, Governor feels that the economy is moving in the right direction and if the currency continues to fall, it could improve the outlook further. With that in mind, they don’t see a move in the cash rate anytime soon and that was enough for European traders to take the Australian dollar to fresh lows. numbers were due for release Tuesday evening along with . Given the weakness in , we expect service-sector activity to slow but GDP could be stronger than expected. Regardless, the level to watch for AUD/USD is its December 2016 low of .7160.

The dropped to a 2-year low on Tuesday on the back of lower . Dairy is one of the country’s most important industries and in the past 3 months, we’ve seen very little improvement in prices. This fourth consecutive decline means dairy prices have fallen 18% since March in U.S. dollar terms. Thankfully the New Zealand dollar also depreciated quite a bit during this time and demand for NZ dairy and meat exports in general have been strong, so the industry isn’t doing too terribly. Nevertheless, 65 cents is the main support level for NZD/USD.

and ended the day off their lows versus the U.S. dollar. Stronger growth failed to help the euro while weaker UK added pressure on sterling. With that in mind, still outperformed the euro. Bank of England Governor said on Tuesday that the monetary policy committee doesn’t have a forecast for a no-deal Brexit and the economy is acting like there will be a deal. So if the economy stays on track, there’s a need for more . BoE member , on the other hand, sees the chance of no deal at about 1 in 4. Aside from Brexit, investors are also watching for updates on the Governor’s future. He told lawmakers this week that he would be open to extending his tenure and the government responded by saying that an announcement will be made shortly on this issue. If Carney stays on for a second term, sterling will rally in relief but if Prime Minister May decides to change things up, the uncertainty won’t be received positively by investors. In the near term, the focus will be on the UK’s and composite PMI numbers and given the sterling’s negative bias, softer data could drive GBP/USD below 1.28. With and retail sales weakening in July, the Eurozone’s numbers could be softer.