Tuesday, Oct. 9: Five things the markets are talking about

The first day back in a holiday-shortened trading week again sees U.S. Treasury yields creeping higher, trading atop of their seven-year-high yields. This aggressive backing up of sovereign yields this month is again putting pressure on risk assets.

However, overnight, equities traded mixed, with Asian bourses and U.S. futures on the back foot, while Euro stocks have been able to move higher.

Yesterday saw the biggest one-day sell off in three months of China stocks despite the People’s Bank of China (PBoC) cutting its RRR for the third time this year. Their easing actions have again put pressure on the yuan, which is sure to annoy Washington.

The International Monetary Fund has cut world 2018 and 2019 GDP forecasts by 0.2% to 3.7%. It’s the first cut in two years, as the risk of balance has shifted to the downside due to escalating trade conflicts and tighter financial conditions.

On tap: The U.S. Treasury is auctioning $230 billion worth of debt this week. On Friday, the IMF and World Bank will hold meetings in Bali, with the world’s finance chiefs.

Global risk aversion has put the yen (¥113.17) in demand, which is hurting Japanese stocks. Overnight, the fell to a three-week low after stocks of firms with exposure to China weakened on worries about its economy, while chip equipment-makers tumbled, tracking weakness in U.S, tech firms’ overnight. The Nikkei share average ended 1.3% lower, while the broader dropped 1.8%.

Down-under, shares have also extended their sharp declines from Monday overnight; trading atop of their four-month lows on investor concerns over growth outlook for the country’s largest trading partner China hurt sentiment. The fell 1% at the close of trade, after losing 1.4% yesterday. In South Korea, the was closed for a holiday.

In China, stocks rebounded overnight from Monday’s steep losses as authorities took further steps to support the economy and contain the effects of an escalating trade war with the U.S. The index closed 0.2% higher, while the blue-chip index was up 0.3%. In Hong Kong, the closed down 0.1%.

Note: Dealers attribute yesterday’s steep losses in China to investors playing catch-up after a weeklong holiday, during which a sharp sell off in global bond markets had dragged down equity markets. 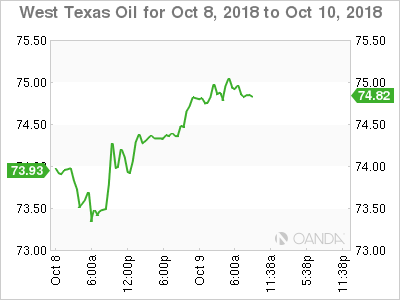 Oil prices remain a better bid, as further evidence emerges that crude exports from Iran, OPEC’s third-largest producer, are declining before the imposition of new U.S. sanctions. Also providing price support is a slow hurricane in the Gulf of Mexico.

According to tanker data and an industry source, Iran’s crude exports fell further in the first week of October, as buyers sought alternatives ahead of U.S. sanctions that are to take effect on Nov. 4.

Iran exported 1.1 million bpd of crude in the first week of October, down from at least 2.5 million bpd in April – before President Donald Trump imposed sanctions.

Saudi Arabia, the biggest producer in the OPEC, said last week it would increase crude output next month to 10.7 million bpd, a record. The market will wait to see if they follow through.

Meanwhile, oil companies operating in the Gulf of Mexico have closed 20% of oil production as Hurricane Michael moves toward the eastern Gulf States including Florida.

Ahead of the U.S. open, gold prices are better bid on risk aversion amid concerns over a potential slowdown in China’s economic growth. is up 0.2% at $1,189.58 an ounce.

Note: Yesterday, it fell 1.2%, its biggest one-day percentage fall since the middle of August, and also touched a more than one-week low of $1,183.19. 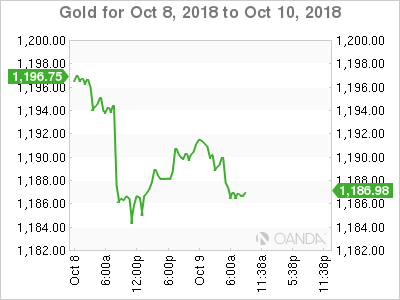 3. Sovereign yields on the move

On the weekend, China cut its Required Reserve Ration (RRR) for major banks by 100 bps to 14.50% to prevent the country’s credit conditions from getting too ‘tight.’ The PBoC’s easing bias highlights their policy divergence with the Fed.

The impact from Sino-U.S. trade tensions is to become more noticeable in coming quarters, so an easing bias in monetary policy, coupled with an expansionary fiscal policy is expected to support China’s economy. The PBoC stated that it would continue with “prudent and neutral” monetary policy. Will investors buy into Beijing’s policy-easing measures or do they require more market-orientated reforms?

In Italy, BTP yields have backed up to new highs after Economy Minister Giovanni Tria addressed the parliament on the government’s budget plans. He called for a “constructive discussion with Brussels over the budget” and said Italy’s “structural deficit will recover once GDP and employment returns to pre-crisis levels.”

Elsewhere, the yield on 10-year Treasuries has advanced 2 bps to 3.25%, hitting the highest in more than seven years with its fifth consecutive advance.

Note: The U.S. treasury is to auction $230 billion worth of debt this week. 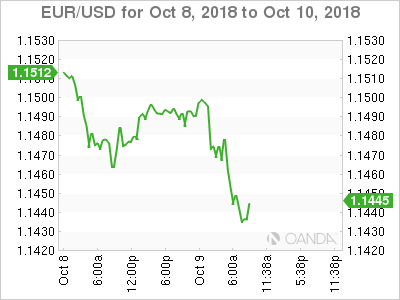 The USD is maintaining its firm tone across the G10 currency pairs as U.S. Treasuries are still holding last week’s gains in yields.

China’s effort to support its decelerating economy continues to heap pressure on the yuan. The yuan weakened beyond ¥6.93 this week, coming within striking distance of its lowest level in nearly two years, after China moved over the weekend to free more funds for domestic banks. The currency briefly recovered to around ¥6.91 earlier this morning. 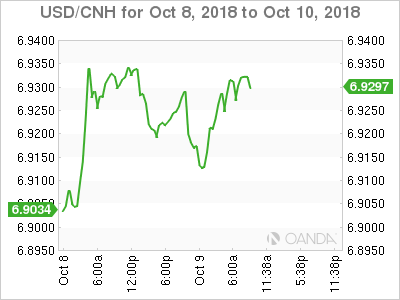 Data this morning showed that German exports slipped for the second-straight month in August, which may suggest that, the Sino-U.S. trade conflict are dampening demand for goods.

According to the Federal Statistical Office, the total exports of goods fell 0.1% in August from the month before, while imports of goods dropped 2.7% in the period.

Note: German exports stumbled in August despite a weaker EUR. The EUR traded around $1.14 in mid-August compared with levels around $1.25 in early February.

Germany’s adjusted trade surplus stood at €18.3B in August, undershooting a consensus forecast of €19.0B and a surplus of €21.3B in August last year. 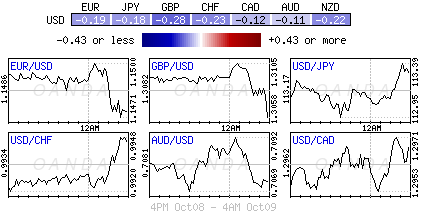