Will Brexit Spoil GBP and More FX Risk Aversion Ahead?

The last month of the year kicked off with a bang but not in the way that many of us would have hoped.

Equity markets sold off across the globe and in the world of currencies, the US and Australian dollars were the worst performers. A convergence of negative news pressed both currencies lower but most of the concerns centered on China, which is why AUD fell the hardest. The week started with optimism after President Trump and President Xi reached a trade truce, but things went south quickly when the US arrested Huawei’s CFO. Stocks crashed and President Trump tried to stem the slide by saying he had no knowledge of the arrest and that trade talks with China are going very well. Investors are sceptical and in a headline-driven trading environment, they are taking everything at face value. As we muddle through the conflicting headlines, what is clear is that uncertainty will remain in the weeks ahead as investors wait to see if the Huawei arrest really affects US-China trade talks. There’s also a big Brexit vote next week and the ECB meeting. Between these events and a continued focus on China, December will remain a jittery month for currencies.

US Dollar is in Trouble

The latest US jobs report is proof that despite the pickup in manufacturing and service sector activity the momentum in the US economy is slowing. Only 155K jobs were created in November versus a forecast for a 198K increase. Payroll growth in October was also revised slightly lower but the concern is wages. Not only did average hourly earnings growth fall short of expectations, rising only 0.2% compared to a forecast of 0.3% but the prior month’s reading was also revised lower to 0.1%.

This means that companies are hiring fewer workers, paying them less than expected and allowing them to bill fewer houses. Considering that the labour market has been the main engine for US growth, this month’s report has some major red flags. Another big problem is that hiring intentions will suffer from the past 2 months of market volatility. Fearing the possibility of further losses in share values, businesses will become more conservative about hiring which could lead to a downward spiral for the US economy and the rest of the world.

While the new date for Fed Chair Powell’s Congressional testimony has not been set, the jobs report, the sell-off in US stocks and decline in Treasury yields tell us that investors expect the Fed to be less hawkish and to fall further. In the lead up to the last FOMC meeting of 2018, next week’s inflation and retail sales report will be just as important as NFP but keep an eye on US-China headlines as they will also influence risk appetite. USDJPY is at risk of testing 112 and possibly moving down to 111.50 if CPI or retail sales surprise to the downside.

Euro is prime for a breakout and this week’s European Central Bank monetary policy announcement could trigger just that. Euro has held up well in the face of risk aversion because for the most part, no news is good news for the currency. The ECB is widely expected to end asset purchases this month but between weaker global growth, trade uncertainty and lower oil prices, the central bank could lower their growth and inflation forecasts. Taking a look at the table below, spending and labor market activity has recovered slightly but there’s also been widespread deterioration in business activity. ECB officials have been mostly dovish, stressing the need keep policy accommodative. So if they combine this view with lower economic forecasts, could find its way back below 1.13. However if no changes are made, EURUSD which has already been trending higher will break to the upside for a move above 1.15. 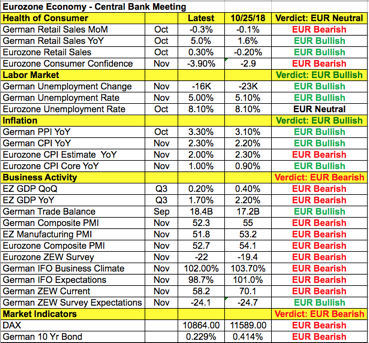 3 Ways UK Parliament Deal Could Play Out for GBP

The focus will turn to European currencies this week with what could be the most important Brexit vote this year happening on Tuesday. We’ll start with sterling because it will have the biggest move next week. Prime Minister May has suggested that Brexit lives or dies by the Parliament’s vote on December 11th. She said the choices are her deal, no deal or no Brexit (though the first step to the latter will be a rejection of her proposal). The European Union who went along with the UK’s plans to exit the EU begrudgingly said this is the only deal on the table. Many feel that the vote will fail because the DUP and a group of Euroskeptic Tory members oppose the agreement. The question then becomes the margin. If they lose by 100 or more votes, it will be an all-out defeat that will cause chaos for sterling, the UK economy and could cost PM May her job. Almost immediately there will be calls for an election and/or a second Brexit referendum. The risk of either happening will send GBP tumbling lower in a move that could take it below 1.25. If the vote is rejected by 50 or less members May could use this as an excuse to go back to the EU for changes and return to Parliament for another vote. This scenario would still be negative for GBP but could limit losses to 1.26. In the unlikely scenario that she manages to win over Parliament and push her deal through, short covering will take above 1.30 easily. On the eve of this key vote, the European Court of Justice will decide whether Britain could reverse Brexit. If they rule yes, it would be a blow to May’s Brexit push and more importantly add fuel to the call for a second referendum. Although Brexit will dominate sterling flows, UK trade and labour market

The Australian dollar was hit from all sides last week in a move that turned A$ into the worst performing currency. Aside from the obvious impact of US-China trade tensions on Australia, data has been mixed. Although service sector activity and retail sales improved, manufacturing activity, building approvals, the trade balance and Q3 GDP deteriorated significantly. Third quarter growth was apparently the weakest in 2.5 years. The Reserve Bank of Australia was unfazed as they left interest rates unchanged at 1.5% and reiterated their steady and neutral policy stance. According to Deputy Governor Debelle, the next move in interest rates should be up though a change is some ways off. With no major economic reports this upcoming week, risk appetite will be the main driver of AUD flows. There’s been a recent rebound in iron ore, gold and prices that could help stem the slide in the currency. The New Zealand dollar also fell last week but its losses were moderate in comparison to AUD, which is why dropped to its lowest level since July 2017. New Zealand data wasn’t great either as the terms of trade, job ads, house prices and commodity prices weakened. With only a business PMI report on the calendar, we continue to expect more exaggerated moves in AUD vs NZD.

While the Bank of Canada was less hawkish at the latest monetary policy meeting, Canada’s economy is on fire with a record-breaking 94.1K jobs created in the month of November. This is the strongest single month of job growth since Statistics Canada started keeping records in 1976. As a result of this blockbuster increase, the unemployment rate dropped to 5.6%, a record as well. Almost all the jobs were full time with Alberta – the oil-producing hub adding 23,700 workers despite falling oil prices. Bank of Canada Governor Stephen Poloz said there’s more room for non-inflationary growth and rates hikes will be data dependent, but this employment report screams of the need for more tightening. OPEC also reached an agreement to cut production by 1.2 million barrels a day which should be enough to halt the slide and shift the momentum in crude prices. $50 was really the uncle point for OPEC nations who pressed Russia to come onboard despite earlier resistance. With no major Canadian economic reports scheduled for release next week, between the OPEC deal, the prospect of a further recovery in oil, weaker US jobs data and stronger Canadian employment, we have strong reasons to believe that the Canadian dollar hit a bottom.