In its debt management strategy for 2018-19 published in February 2018, the Government of Canada (GoC) intended to increase the outstanding amount of treasury bills (T-bills) in the secondary market from a 10-year low of $110.7 billion at the end of 2017-18 to $138.0 billion by the end of this fiscal year (EOY). With the Fall Economic Statement just released and a little more than four months remaining until the end of FY 2018-19, we estimate that the GoC is on track to meet its supply of T-bills target. Since one of the goals of this strategy was to improve secondary market liquidity, we also verified whether liquidity recently improved in the Canadian market for T-bills. Based on our liquidity proxy, we did not uncover evidence that it had.

Since the beginning of FY 2018-19, the outstanding amount of T-bills at month-end increased from $110.7 billion at the end of March 2018 to $133.0 billion at the end of October (see chart 1). For the end of November, we estimate that the outstanding amount of T-bills in circulation will drop to $122.7 billion due to a large number of bills coming to maturity this month ($42.3 billion). This is partly offset by an estimated $32-billion issuance this month, including the November 27th bi-weekly regular auction ($11.5 billion). With only four months left in 2018-19, this puts the GoC somewhat further away from its $138B EOY goal. 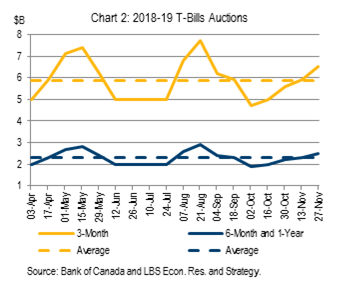 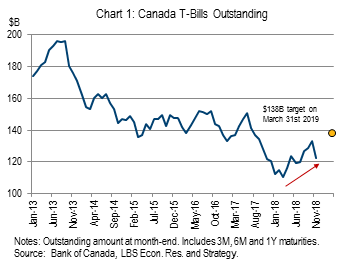 Nonetheless, we believe that, based on this year’s auction amounts, the Bank of Canada, which manages the GoC borrowing program and conducts the auctions, is largely on track to reach its objective. Since the beginning of the year, the average amount of 3-month, 6-month and 1-year issued on the regular bi-weekly auctions were $5.9 billion, $2.3 billion and $2.3 billion, respectively (see chart 2). Considering that there are 8 auctions remaining until the end of the fiscal year and assuming that the auctioned amounts by the end of March 2019 correspond to the year-to-date averages, the stock of T-bills would reach $139B. This would represent a small $1B surplus relative to the $138B objective.

While the supply of T-bills unambiguously improved in 2018-19 and is on track to reach the GoC’s objective, it is unclear to what extent the Canadian money market became more liquid. One way to measure short-term liquidity is through the difference between the 1-month T-bill rate and the overnight rate target. This spread can serve as a proxy to measures the strength of demand for short-term T-bills. It suggests that liquidity has deteriorated since the second half of 2017 and has not meaningfully recovered since (see chart 3). Besides, the fact that the return on a 1-month T-bill is lower than the return on the overnight is indicative of strong demand for the former. In fact, in percentage terms, the 1-month/overnight rate target spread has oscillated between -8% and -12% this year, indicating very strong demand for very short-term safe products. The higher financial market volatility generally experienced this year and the uncertainty related to the economic outlook has fostered the demand for T-bills. They are also commonly used as collaterals in repurchase agreements. Hence, it might prove difficult for the GoC to significantly improve liquidity with additional supply when markets forces such as investors’ demand lean against it. 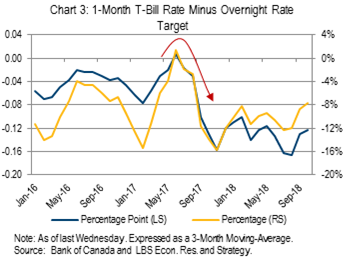