Will ECB Rescue Euro Or Drive It To New Lows?

In the past week, the soared after Fed Chair Powell reassured investors that the economy is doing well and interest rates are on the rise. However, President Trump halted the dollar’s rally when he took the remarkable step of commenting on Fed policy. For the first time in two decades, a president trespassed on the Fed’s independence by saying he’s “not thrilled” with the rate hikes. Although he added that he’s “letting them do what they feel is best,” the use of the word ‘letting’ implies that he thinks he could affect Fed policy.

That did not sit well with investors. Currencies were also affected by escalating trade tensions – China and the US are accusing each other of initiating the trade war, which is a sign that negotiations aren’t going well. Behind the scenes China continues to weaken its currency with the falling to 1-year lows. The worst-performing currency last week was , followed by the . The best performer was the . Looking ahead, the overbought US dollar is due for a correction and with no major US event risks until Friday, that turn could happen this week. , in particular, will be in focus with a European Central Bank on Thursday. If the PMIs surprise to the upside and the ECB is mildly optimistic, EUR/USD could recover back to 1.18. 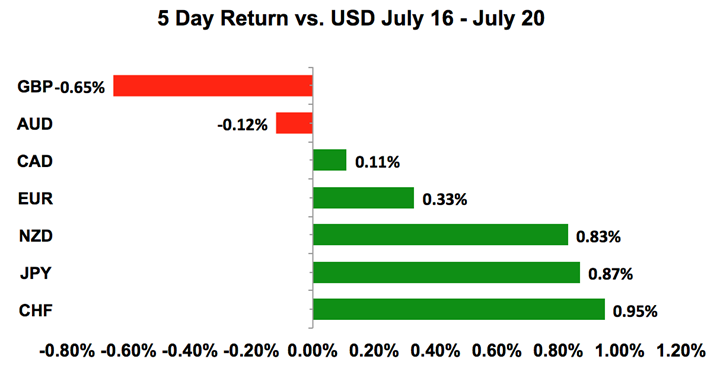 An end-of-week sell-off left the US dollar unchanged against most of the major currencies. The most important event risk was Fed Chairman Powell’s semi-annual to Congress. While his prepared remarks were released the week prior, the US dollar still benefitted from his positive comments. Although Powell acknowledged the uncertainty posed by trade tensions, he spent more time talking about the bright outlook for the US economy. He said, “recent inflation data are encouraging,” “unemployment is low and expected to fall further,” and “the outlook for growth abroad remains solid.” He said that the best way “for now,” is to keep gradually raising interest rates and this reassurance of additional tightening took above 113. Unfortunately, the pair failed to sustain its gains because of Trump’s comments and after the initial enthusiasm faded, investors realized it will be 2 months before are increased again and for now the latest US economic reports have fallen short of expectations. growth slowed to 0.5% from 1.3% while fell by the largest amount since November 2016. According to the , the Fed believes that the US economy is progressing well but in time, trade tensions and higher interest rates will slow consumer demand and growth. Supporting the Japanese yen was the Bank of Japan’s reduction in bond purchases. This week, Friday’s report is the most important piece of US data scheduled for release and as growth is expected to have doubled, we could see a beginning of the week pullback in the dollar and an end-of-week rally.

fell to a 10-month low against the US dollar this week, breaking through 1.30 on the back of weaker data. Earnings, inflation and retail sales slowed from the previous month, casting doubt on the market’s expectations for a next month. The BoE is widely expected to be the next major central bank to tighten monetary policy with investors currently pricing in 84% chance of a hike on August 2. Despite these softer economic reports, CPI is well above the central bank’s 2% target and average weekly earnings is hovering between 2.5% and 2.6%. The BoE needs to get inflation back to target and with commodity prices on the rise, the pressure is only growing. Bank of England Governor also believes that the trade war will have only a modest impact on the UK but the real trouble is still Brexit. Despite the prospect of a hike, investors are selling sterling and they may not be convinced to buy until data turns positive or UK policymakers talk up the currency. With no major UK economic reports scheduled for release this week, the only hope is BoE Deputy Governor ’s speech on Monday. Taking a look at the charts, 1.30 is the key level of support for . If this level breaks again, we could see the sell-off extend to 1.28. If 1.30 holds, GBP/USD could rally back to 1.32. Unless policymakers question the market’s expectations for future rates, we still think GBP is a buy on dips leading up to the policy announcement – but as usual, it’s best to wait for some sign of stabilization before jumping in.

This week is extremely important for EUR/USD as it could decide whether the pair bottoms or hits a new low. The latest PMI activity reports will be released along with the European Central Bank’s monetary policy announcement. Having just announced the tapering of asset purchases in June, no changes are expected but as usual, their guidance is key. At their last meeting, they said interest rates would remain unchanged until at least the summer of 2019 but last week, ECB sources reported that there’s a split on what “summer” means. Some see a hike in July, others in August or the Fall. Recent comments from ECB officials have been positive but ultimately it boils down to data and according to the table below, there’s been unevenness in the region’s economy. Consumer price growth slowed, trade activity weakened and investors are less optimistic. Although German Chancellor Merkel resolved some of her political troubles, the European Union is knee deep in a verbal trade war with the US and the outcome won’t be good for the region. They are currently eyeing a car tariff retaliation of about 20%. For all of these reasons, we expect ECB President to remain cautious but if recent central bank rhetoric is a guide, there could also be a tinge of optimism. EUR/USD direction will depend upon his emphasis – if it’s on low rates, EUR/USD could hit 1.15 but if he focuses on the positive data trend, EUR/USD could find its way back to 1.18. 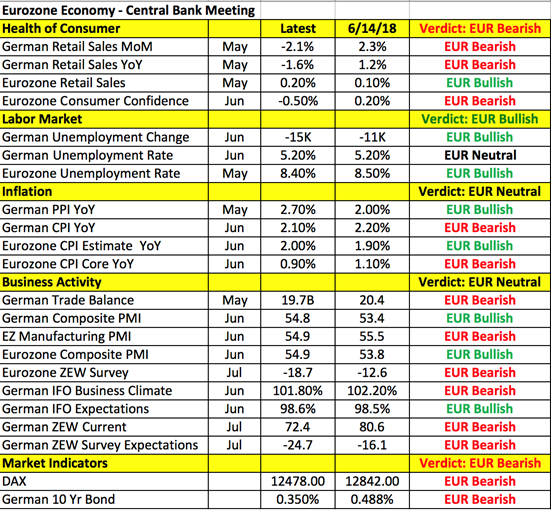 All 3 of the commodity currencies came under heavy selling last week on the back of weakness but recovered on Friday when the floor under the greenback gave way. China’s depreciating currency is so important that it drove the Australian dollar lower despite robust job growth in June. More than 50K jobs were created last month. This was not only the strongest one month increase since November but with slack in the market, there’s more room to hire. Full and part-time jobs increased, the is on the rise and the unemployment rate held steady but the Reserve Bank is not in a position to raise interest rates because the availability of labor is growing and therefore capping wage growth. Also, the weakness of the Renminbi poses serious risks to Australia’s economy. Second-quarter inflation reports are scheduled for release this week and with consumer inflation expectations on the rise, CPI is expected to tick higher taking the year-over-year rate above the central bank’s 2% forecast. If the US and China stop swapping trade jabs, a stronger inflation report could actually help find a bottom.

The found a bottom last week courtesy of stronger inflation data. Consumer prices grew 0.4% in the and while this is a slower pace of growth than Q1, on an price pressures picked up significantly from 1.1% to 1.5%. There’s been recent speculation that the Reserve Bank could cut especially after reports of softer manufacturing and service sector activity, but with inflation on the rise, there’s no urgency to act. Still, New Zealand’s economy faces severe pressures that should prevent a meaningful currency recovery. Dairy prices fell 5 out the last 6 auctions and they haven’t seen a material increase since February. China, New Zealand’s most important trade partner, is also experiencing slower growth with future potential squeezed by trade tensions. When the RBNZ last met, they said rates would remain at 1.75% “for now,” adding that they could be increased or decreased as necessary. On a technical basis, the 3-week long consolidation above 67 cents suggests a near-term bottom but we expect any recovery to be limited to 69 and at most 70 cents because this week’s will most likely reinforce the softer data trend.

Last but not least, there has been quite a bit of volatility in the . Falling took the Canadian dollar lower initially but Friday’s and reports reminded everyone of why the Bank of Canada chose to raise last week. Consumer spending is strong and inflation is on the rise with the annualized pace of CPI growth hitting 2.5% in June, the highest level since February 2012. Retail sales rose by the strongest amount since January 2017. These data improvements were enough to reverse USD/CAD’s trend and take the pair below the 20-day SMA. With no major Canadian economic reports on the calendar this week, the loonie may continue to ride on the coattails of these reports and fall to 1.30.