On January 17, Norwegian Prime Minister Erna Solberg – leader of the Conservative Party – shed her government’s minority status and was able to establish a majority. Her initial coalition consisted of the Conservative, Progress and Liberal parties. Together, they held 80 seats in Norway’s 169 seated parliament, leaving her 5 MP’s short of an outright majority.

However, the PM was able reel in the Christian Democratic Party, adding eight seats to her conservative coalition and allowing her to now command a majority in parliament. This marks a significant deviation for Norway’s political orientation, given the country has not been led by a conservative majority since the 1980’s.

The establishment of a conservative-led government in Norway is part of a broader right-ward turn in European politics.

While no significant changes were made, some of the notable ones were a reduction in taxes, a continuation of what is known as “bar drilling” in the Lofoten islands, and tax breaks on oil exploration. This was a boon to Norway’s oil industry that contributes 12 percent to GDP and composing 37 percent of exports. The heavy reliance of economic activity on oil is made visible when overlapping Norway’s equity benchmark index with crude oil prices. 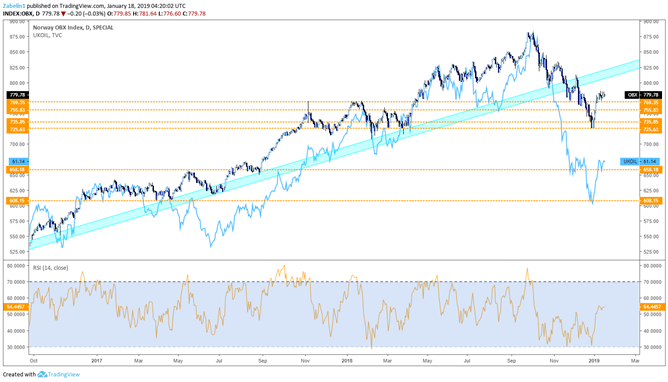 This may provide a small boost to the Norwegian Krone and Norway’s economy as the country – and really, the whole European continent – faces slower growth amid a broader global deceleration. USD/NOK for the time being is trading between 8.5201-8.5586 but may begin to start trading above the upper layer in the short-term. 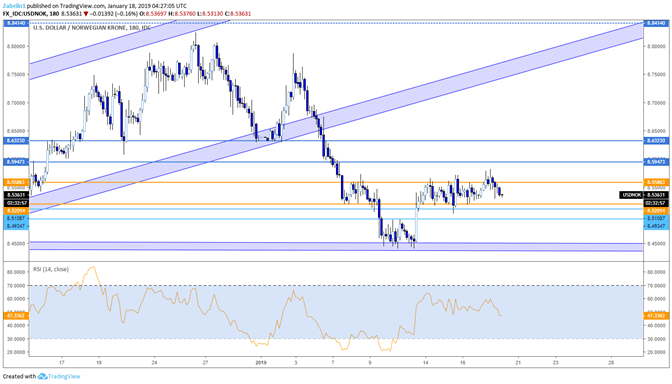 However, as 2019 unfolds – and all the tribulations that may accompany it – USD/NOK could establish 8.6323 as a support level. NOK bears from that point would likely be aiming for the pair to re-enter the October trading channel. 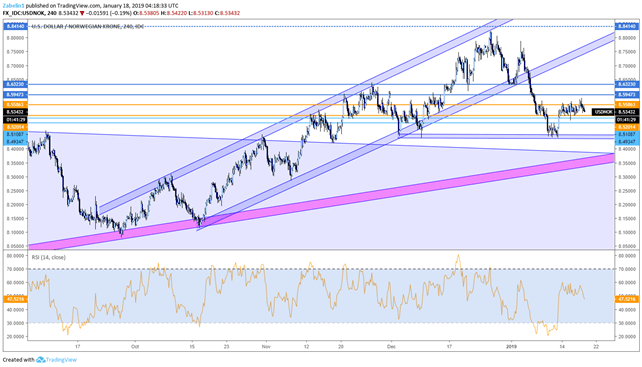