Will The Dollar Hit New Highs Or Turn Lower In Q3?

Between April and June, the greenback saw its value grow more than 5% against and the . It also appreciated between 3 and 5% versus , , and . On a trade-weighted basis, the rose to its highest level in nearly 12 months wrapping up its best and first positive quarter since Q4 of 2016. As a consequence of these moves, the Australian dollar fell to its weakest level since January 2017 and the New Zealand dollar dropped to its lowest level since May 2016. The big question now is whether the dollar’s rally continues or it stabilizes and starts to turn lower in the third quarter.

To answer this question it is important to recognize the 2 main factors driving the dollar’s strength in Q2 – the Federal Reserve’s 50bp of tightening and the US’ threat of a trade war. That threat has turned into reality with the battle expected to intensify in the third quarter. The Federal Reserve also plans to raise at least once and probably twice this year, so the forces dominating Q2 won’t go away in Q3. Political and monetary factors are very powerful drivers of currency movements and until there’s a hint of change, investors will keep buying US dollars. Now as often as President Trump changes course, this possibility should not be diminished.

This latest round of US dollar strength had nothing to do with data as consumer confidence tumbled in the month of June and house prices *receded, although new home sales* increased pending home sales declined and durable goods orders continued to fall. Personal spending was also weaker than anticipated in the month of May but investors ignored all of these reports because they do not have a significant impact on the next round of tightening. Instead, front of the week risk aversion drove the dollar higher. One of the biggest stories this past week was the depreciation of the Chinese . The Chinese government who closely manages its currency allowed the yuan to fall to its weakest level in 6 months. On an intraday basis, it experienced its sharpest one-day decline since their August 2015 devaluation. This move caused a wave of panic in the financial markets as investors view this as a response to the US’ tariffs. It also has widespread negative ramifications for the region. However, trade is not the only reason why the is weakening – Chinese growth is slowing and their stocks entered bear market territory. Although Trump pulled back from harsher measures on Chinese investments, the US’ focus on technology theft and the start of tariffs on July 6 means China-US trade tensions will remain in focus this week. President Xi assured his provinces and ministries that they will respond accordingly to a trade war. While there’s a lot of data scheduled for release this week, US job growth is not a problem especially with the unemployment rate at a 48 year low. Unless the data is abysmal, this week’s US economic reports should remind everyone that the Fed is the only major central bank raising interest rates and the tightening cycle is not expected to peak until mid-2019. The latest ISM reports and FOMC minutes will also be released but with a shortened trading week ahead (US markets are closed on Wednesday) trade tensions and risk appetite will mostly overshadow data.

We have been surprised by the extent of sterling’s weakness. Brexit talks are not going well but that’s isn’t new and there’s been a major setback over the past week. Yet sterling fell to its weakest level since October 2017. A large part of this move was driven by US dollar weakness but the currency also dropped to its weakest level versus the euro in 3 months. No major U.K. economic reports were released and the one number worth watching (Q1 GDP revisions) was better than expected. Bank of England Governor Carney did not touch on monetary policy in his speech last week and while BoE member Cunliffe expressed some concerns about household indebtedness and incoming member Haskel is in no rush to raise interest rates, there’s no question that the BoE will be the next major central bank to tighten. Whether sterling collapses further or bottoms out hinges on this week’s economic reports. Manufacturing, service and construction sector PMIs are scheduled for release – if two out three of these reports show improvement, the recovery on Friday could turn into a broader rally that takes back above 1.33.

Angela Merkel finally reached a deal that could preserve her role as Chancellor. The hastily put together agreement should be enough to satisfy the Christian Social Union. The terms of the deal remain vague with a promise to create closed migrant centres that would process refugees on a voluntary basis, but so far no details emerged as to which countries would host the centres and what process would follow. Still, this seems to be pan-European effort to deal with the problem in a standardized way instead of the current ad-hoc approach to the issue. Considering that this issue risks derailing Merkel’s coalition and would have been a severe test for the EU as a whole, investors cheered the news by driving higher at the end of the week. The next step is for Merkel and the head of the CSU to decide at their meeting over the weekend if they will accept the Brussels agreement. If they do, it could be enough to carve out a short-term bottom in EUR/USD. However dovish monetary policy and softer data (the latest reports show business confidence and retail sales falling in German) will attract sellers between 1.1750 and 1.18. With no major Eurozone economic reports on the calendar this week, EUR/USD could extend its gains towards 1.18 if Merkel and CSU head Seehofer accept Brussels’ terms.

Over the past week, the worst performing currency was the New Zealand dollar. fell to its weakest level in 2 years on the back of the Reserve Bank of New Zealand’s monetary policy announcement and the rising US dollar. Interest rates were left at a record low of 1.75% and even though RBNZ Governor Orr said “the official cash rate will remain at 1.75% for now” instead of “for some time to come,”New Zealand dropped to fresh lows. By dropping the reference on future guidance, Orr is telling us that rates could be changed in the future and the only question is the direction. Based on the reaction in the New Zealand dollar, investors are betting that the next move will be a rate cut because the rest of the policy statement was more dovish. Their senses are right because that’s exactly what the RBNZ wants us to think as they see more spare capacity in the economy, is worried about the global economic outlook and expects lower and weaker government spending. The New Zealand dollar may be deeply oversold but it should continue to underperform other major currencies.

Meanwhile, the Australian dollar will be in focus this week with a Reserve Bank monetary policy announcement. The last time the RBA met, they reaffirmed their neutral bias. Since then, we’ve seen no major change in Australia’s economy partly due to the lighter economic calendar. Consumer inflation expectations are up, the unemployment rate is down and growth in the first quarter accelerated. However full-time job growth slowed, the trade surplus narrowed and business confidence declined. Most importantly, China reported weaker data and the Yuan depreciated significantly – two developments that are particularly dangerous to the outlook for Australia’s economy. We think it will be very difficult for the RBA to be optimistic and cautiousness by the central bank will keep the Australian dollar under pressure. Although itself will also be affected by the market’s appetite for risk, its rally should be limited.

The Canadian dollar also fell to a 1-year low last week but with GDP growth beating expectations, oil prices on a tear and Canadian bond yields moving higher, the tides are shifting for the loonie. After consolidating between a narrow 1.3260 and 1.3385 range for seven trading days, broke down on Thursday and extended its losses on Friday. The turn was particularly significant because it occurred the day after the pair hit its highest level since June 2017. The rush to sell was driven by comments from Bank of Governor Poloz. Investors focused on his concerns about trade and new mortgage lending rules but the main takeaway should have been that he felt “the market understood its (hawkish) May statement.” NAFTA remains a risk and the trade war between the US and Canada is still brewing but the deeply oversold loonie is in the process of a retracement. As long as Canadian bond yields continue to recover and oil hangs around $70 a barrel, we see USD/CAD dropping below 1.30. There are no major Canadian economic reports on the calendar until the end of the week when the June IVEY PMI and employment reports are due for release along with the May trade balance. Friday will be an important day for USD/CAD. 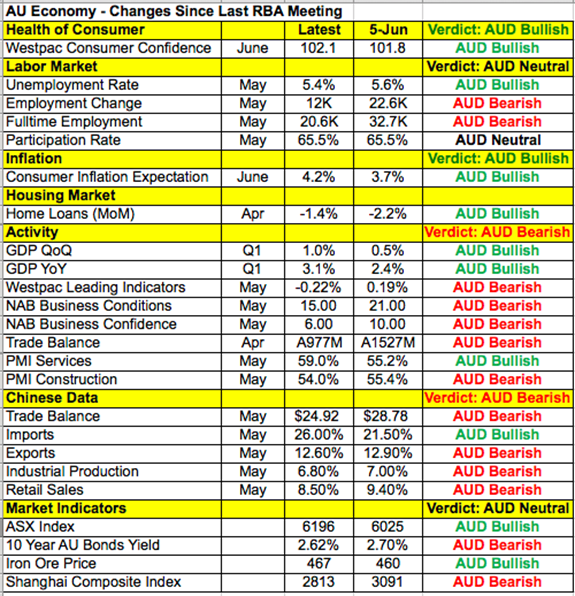