Will The Fed Sabotage USD This Week?

September is historically the worst month for equities but 2018 is shaping up to be an exception.

US stocks hit a record high and this was crucial to the recovery of , and other major currencies. The big story this month was that investors ignored all of the negative trade headlines, choosing instead to focus on positive data surprises from the US and other parts of the world. The ’s slide last week against all of the major currencies except for the reinforces the risk-on story. The best-performing currency was the , which shot higher on the back of strong . Aside from the yen, was the weakest as the UK is no closer to a Brexit deal with the EU. Looking ahead, the question on everyone’s mind is whether the dollar will have a strong or weak end to the quarter. There’s no doubt that the Federal Reserve will raise by 25bp on Wednesday but how the dollar reacts will depend on their guidance. But that’s not the only factor affecting the greenback because month- and quarter-end flows will also influence FX trade.

Judging from the recent performance of the , investors are preparing for a dovish . This means that the Federal Reserve will raise interest rates by 25bp on Wednesday and temper expectations for additional tightening this year. The market is pricing in 100% chance of a hike on September 26 and a 75% chance of tightening on December 19, which implies that there’s a still a large subset of investors who anticipate a fourth hike this year. We think the risk of disappointment is greater than a positive surprise because, after 3 rounds of tightening, it would behoove the Fed to take a break, especially given the president’s criticism, trade war uncertainty and mixed data. Since July, there’s been weakness in , , housing and manufacturing activity. However with strong corporate earnings, record highs in stocks and continued labor-market strength, if the Fed wanted to raise interest rates again, the arguments are there. As a result, we expect the dollar to consolidate with a mild bias to the downside before the FOMC rate decision. There are a handful of other economic reports scheduled for releases such as consumer confidence, personal income, and personal spending but they will be overshadowed by FOMC flows. Portfolio rebalancing flows should also weigh on the dollar but we may have already seen some of those moves last week. , in particular, is vulnerable to a correction back to 111.50. 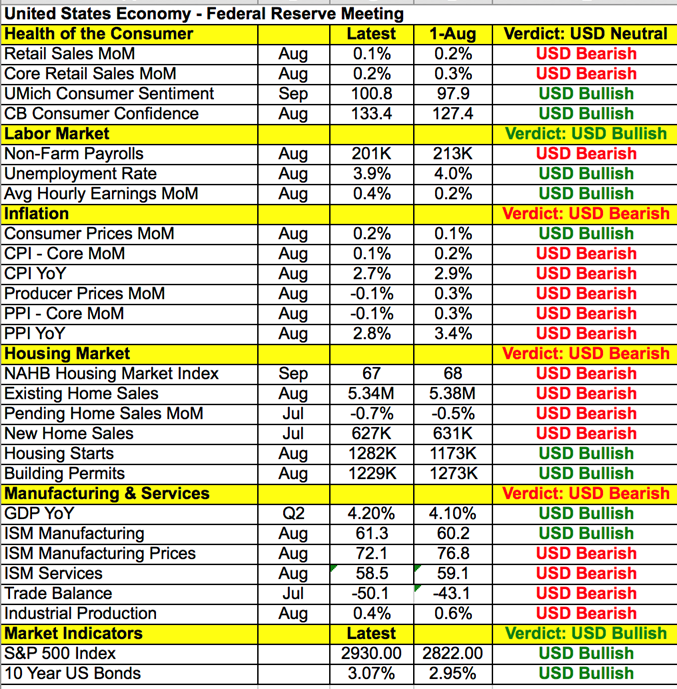 The almost exclusively driving the market’s appetite for and risk-on, risk-off flows. Friday’s Eurozone PMIs were the only pieces of data released and they are mixed with activity slowing and activity accelerating. The declined slightly as a result. There have been widespread signs of slowing in Germany’s manufacturing sector and we think it will affect Monday’s report. EUR/USD hit a 2-month high last week but it is vulnerable to a correction down to 1.1650. The rose to a 5-month high despite the Swiss National Bank’s growing concern about the currency. Although they continue to describe the CHF as highly valued, they said the currency has appreciated noticeably and are therefore prepared to intervene if necessary. They also cut their inflation forecast and said second-half growth could be softer. Diversification out of into the franc is the only reason that we see for the currency’s strength.

’s sensitivity to Brexit headlines was made clear on Friday when the currency lost all of the gains that it had slowly built up during the week. At the start of the month, it appeared that a deal was close but the talks broke down last week when Prime Minister May said they were at an impasse. She said they are far apart on two big issues and the UK expects respect from the EU rather than an outright refusal to accept their proposal. The biggest hangups are their post-Brexit economic relationship and the Irish border. May sees no deal as better than a bad deal, which is bad news for sterling, especially as her own Eurosceptic MPs want her to abandon her Chequers plan. Stronger-than-expected and growth were completely overshadowed by Brexit. With no major UK economic reports on the calendar in the coming week, we expect further weakness in sterling. GBP/USD should drop below 1.30 but its greatest weakness may be against the and commodity currencies. GBP/JPY in particular could fall below 146.

The and dollars were the best-performing currencies. While their rallies have taken them to important resistance levels versus the US dollar, we still expect AUD and NZD to outperform in the week ahead. Data has been better than expected and most importantly these deeply oversold currencies are due for a recovery. It is also very positive that the market was able to look past the latest US tariffs on China and their response. The trade war is still raging but the shots taken by both sides this month were not as powerful as the world may have feared. For the first time, Beijing was not able to match Washington’s tariffs dollar by dollar because they don’t import $200 billion worth of US goods. On the trade front, China is running out of options. If they want to increase pressure on Washington, they’ll need to do so by limiting US business activity, weakening its currency or selling US Treasuries but all of these would have consequences on China’s economy. However, it seems that China still wants to go the diplomatic route and is open to additional talks. No trade news will be good news for the Australian dollar in the coming week.

The performance of the , on the other hand, will be largely impacted by the Reserve Bank’s . When they last met, they sent NZD/USD tumbling to its lowest level in 2.5 years by pushing out their forecast for a rate hike from Q3 of 2019 to Q3 of 2020. This was a significant change at the time that reflected their concern about growth. However, since then, we’ve seen quite a bit of improvement in New Zealand’s economy, especially in , and . In the second quarter, the economy expanded at its fastest pace in 2 years. Although weakness elsewhere keeps the central bank neutral, these latest reports reduce the chance of easing by the RBNZ and increases the odds of a slightly brighter outlook by the central bank. If the RBNZ says nothing damaging, NZD/USD could squeeze up to 68 cents; but if they maintain an overly cautious outlook, the pair could slide below 66 cents. 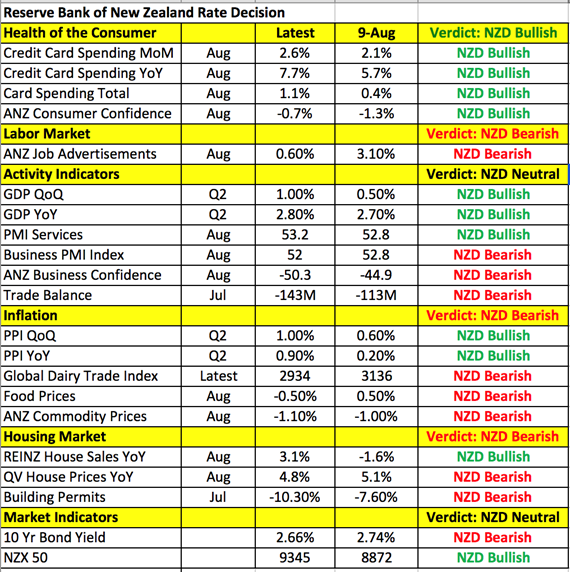 After selling off throughout the month, is due for a recovery. Last week’s economic reports were mixed with growth rising more than expected and falling. These reports had minimal impact on a currency that is being jockeyed around by trade headlines. Canadian Foreign Minister Freeland came back to the US to continue talks but according to the White House, they are getting very close to a NAFTA deal that involves Mexico and not Canada. Every trade negotiation deadline has been blown and if they don’t reach an agreement by next week, President Trump could choose to move forward with Mexico alone because he wants a deal signed before the current president leaves office. Trade headlines should overshadow next week’s report and the risk of no deal with Canada means USD/CAD could squeeze back to 1.30. Technically, there’s a lot of support for USD/CAD above 1.2850.