Everyone says that President Trump’s trade war is bad for the US economy but so far, the decline in US stocks is limited, yields are high, data is good and the is strong.

In other words, we haven’t seen protectionism hurt the US economy… at least not yet. Last week, the US Administration threatened to impose another $200B in tariffs on China and the markets took the news in stride because China did not engage in a tit-for-tat outside of vowing to act with necessary countermeasures. This was a proposal and not policy so they can wait because the public comment period doesn’t end until August 30. Nonetheless, a proposal was enough to drive well above 112. The greenback also resumed its rise against other major currencies. The and dollars were hit hard because their economies are vulnerable to China’s troubles but the worst performers were the Japanese yen and . and the held up best thanks to their central banks’ positive outlooks. It will be another busy week ahead with a jam-packed economic calendar and ongoing headline risk. Barring any major surprises, we expect the US dollar to retain its bid. 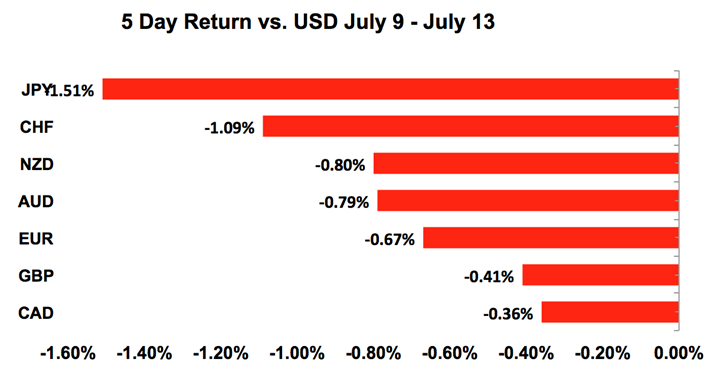 After testing 111 numerous times over the past 2 months, finally broke out in a move that took the pair close to 113. There were no major surprises in data as inflation increased at a slower pace and confidence receded slightly. The main focus and primary driver of USD/JPY flows are global trade tensions, which overshadowed the interest rate hike by Canada and hawkish comments from the European Central Bank. Each of these will be discussed in further detail later but we want to emphasize the breadth of the dollar’s rally. The greenback appreciated despite the lack of real momentum in equities and Treasuries because for now, China is widening its eyes rather than blinking as the threats from the Americans grow. Rather than retaliate head on, especially before proposals become policy, we see them weakening the yuan to offset the tariffs and pressuring US businesses operating in China. There are many ways they can add heat including delaying licenses to US firms to postponing acquisitions. The yen is weakening versus the dollar because these trade tensions haven’t hurt the US economy and if they do affect global growth in a bigger way, Japan would suffer more than the US Until protectionism starts to have a more significant impact on the US economy and affects Fed policy, investors will be attracted to the dollar.

Federal Reserve Chair Powell gave us a better sense of how they feel at the end of last week. In his prepared remarks to Congress, he expressed confidence in the economy and concerns about trade tensions. Retail sales, housing starts, building permits and the Fed’s Beige Book report are scheduled for release this week. The consumer spending report will have the greatest impact on USD/JPY, especially after such a strong move. If the recent slowdown in wage growth translates into lower spending, USD/JPY could slip back down to 111. However, if the data is strong, reinforcing the case for 2 more hikes this year, USD/JPY could break 113. As for the Beige Book, there’s very little reason to believe that it would do anything but highlight the ongoing strength of the US economy.

Sterling should be trading much higher. After surviving two high profile exits (Davis and Johnson) from Prime Minister May’s government and the promise of an “ambitious” trade detail between the US and U.K., it may finally be time for GBP to rally on a flurry of important economic reports scheduled for release this week. All of the infighting within the UK government means a soft Brexit but setbacks in negotiations are still negatively impacting the currency. Sterling was at the whim of Brexit headlines all of last week but it will be difficult for sterling to ignore upcoming data especially if they reinforce the central bank’s hawkish bias. Inflation, employment and the latest retail sales numbers will be released this week and most of these reports are expected to show improvements. Job growth, in particular, was very strong according to the PMIs with some sectors reporting the strongest hiring in months. We already know that BoE Governor Carney feels that the slowdown in the first quarter was temporary and inflation is on the rise. The market is pricing in 77% chance of a hike next month and given the underperformance of the currency, it should only be a matter of time before sterling stops falling and starts rising (1.3150 is support in and 1.3363 is resistance).

With the US dollar rising, the euro has been under pressure. Economic data was softer with Eurozone investor confidence declining in the month of July and Germany’s trade and current account balances narrowing in May. Although ECB officials said they are split on the timing for hikes in 2019 (some members favor a move as early as July and others think it should occur in autumn), concerns about trade tensions overshadowed the possibility of earlier tightening. Also, at the end of the day, the ECB won’t be raising interest rates until the middle of next year and between now and then there could be 75bp to 100bp of additional tightening by the Fed. This is not to say that won’t rally if the data improves and the ECB dials up their optimism but its gains will be limited by the yield spread. As there are no major Eurozone economic reports scheduled for release this week the EUR/USD’s path should be determined by the market’s appetite for US dollars. Technically the level to watch is 1.1650. If EUR/USD closes below 1.1650, it could try to test 1.15. If it holds above this level and starts to move higher, it could test 1.18.

It should be no surprise that the commodity currencies were hit the hardest by President Trump’s trade tantrum. The slowdown in China’s economy, the weakness of the and the threat of additional tariffs pose serious risks to Australia’s economy. This week we’ll get the latest GDP, retail sales and industrial production numbers from China and if growth and demand slows more than expected, it could set the tone for a heavy trading week. So far, Australian and confidence have been stable and the Reserve Bank hasn’t expressed any specific concerns but the longer China tries to depress the value of its currency, the more pressure we’ll see on Australia’s economy. However, until we see evidence of that negative impact, the move lower for will be gradual. This week, the minutes from the last Reserve Bank of Australia meeting and labor data for the month of June will be released and neither one of these reports are expected to pose much threat to the currency. When the RBA last met, they discussed the progress in the labor market and the pickup in inflation. According to the PMIs, companies in the manufacturing and services sector added workers at a faster pace in the month of June, so the labour data should be stronger as well. The New Zealand dollar fell in lockstep with AUD with its losses exacerbated by weaker manufacturing activity. With dairy prices falling and the Chinese currency weakening, New Zealand’s economy faces serious risks in the second half of the year. If this week’s economic reports show inflation and service sector activity growing at a slower pace, could fall to fresh 2-year lows below 67 cents.

The Bank of Canada raised interest rates by 25bp last week and instead of rising, the Canadian dollar fell sharply against the US dollar in a move that took above 1.32. This counterintuitive price action was fueled exclusively by a reversal in oil prices because central bank Governor did not try to talk down the currency. Instead, he said the economy is operating close to capacity and inflation is on target. Most importantly they feel that higher rates will be needed and the economy is in a good place. They didn’t skirt the issue of trade tensions which they described as the biggest issue on the table during decision making but they also said they can’t make policy based on hypotheticals and the implications of trade depend on the circumstances. The market is currently pricing in a 60% chance of another rate hike before the end of the year. Canada’s inflation and retail sales reports are scheduled for release at the end of this week. Given the BoC optimism and their view on inflation, we believe that these economic reports will beat, providing a catalyst for a tail end rally in the Canadian dollar and corresponding decline in USD/CAD.