The Canadian Dollar gapped higher at the start of the trading week as expected amid hopes for a breakthrough in NAFTA renegotiation efforts and continued to build higher once confirmation of an accord crossed the wires. The new framework – dubbed the “US-Mexico-Canada Agreement” or USMCA – ends over a year of haggling and, according to an official statement, establishes a “playbook for future trade deals”.

Financial markets understandably cheered the apparent end of hostilities on at least one of the fronts in the US-led global trade war. Asia Pacific stock exchanges swung higher while the perennially anti-risk Japanese Yen traded broadly lower against its G10 FX counterparts. S&P 500 futures are pointing decidedly higher before Wall Street comes online, hinting at more of the same ahead.

Interestingly, the typically pro-risk Australian and New Zealand Dollars failed to capitalize on the rosy turn in investors’ mood while the US Dollar – recently a standby beneficiary of haven demand and by extension a victim of firming risk appetite – edged upward. This might reflect the expected return to focus on Fed rate hike prospects in the aftermath of last week’s FOMC rate decision.

Eurozone and UK PMI surveys headline the data docket in European trading hours but the outcomes seem unlikely to mean much for the Euro and British Pound considering their limited implications for near-term ECB and BOE policy. Politics are likely in focus for both as Italy’s budget threatens a rift with EU authorities while Brexit-linked divisions are laid bare at the annual UK Conservative Party conference.

The two sides of the debate have nominally centered on Prime Minister Theresa May and former Foreign Secretary Boris Johnson as the leaders factions favoring a softer versus harder line on separation from the EU, respectively. Mr Johnson’s camp is believed to be laboring behind the scenes to oust Ms May. Sterling may decline if those efforts appear to be bearing fruit or rise in the alternative scenario.

The Swiss Franc has emerged as something of a regional haven against this backdrop, trading broadly higher against nearly all of the majors except the CAD and USD at the start of the trading week.It may continue to gain ground as another day of worrying political headlines undermine European assets’ ability to capitalize on the otherwise upbeat market mood.

See our free guide to learn how you can use economic news in your FX trading strategy! 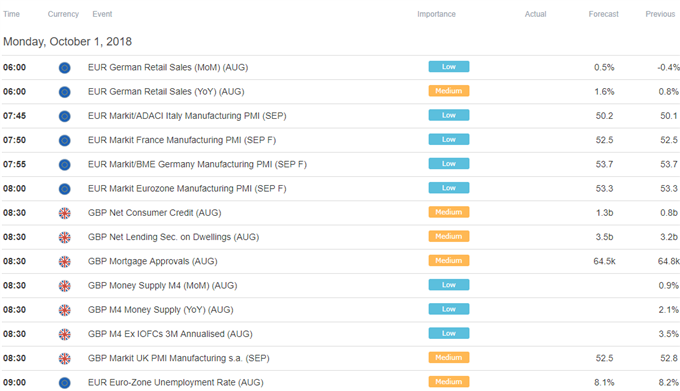