The Japanese Yen slightly rose as local economic data crossed the wires early into Tuesday’s Asia Pacific trading session. July’s preliminary manufacturing PMI data came in at 51.6, down from the prior 53.0 and indicating that manufacturing growth slowed. Asia Pacific equities immediately reacted negatively to the index’s decline, as the Nikkei 225 and ASX 200 both pared their initial opening gains. 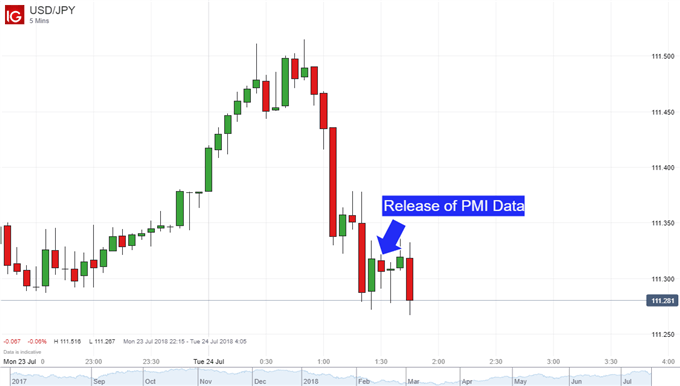 Despite the deceleration in manufacturing economic activity, this data release is unlikely to influence the Bank of Japan’s monetary policy. Considering that Japanese inflation has been well below the central bank’s target of “sustainable two-percent inflation” and the BOJ is currently engaged in a persistent quantitative and qualitative easing program with yield curve control, Yen traders may find better indicators in market risk trends.

Looking ahead, the anti-risk unit may reverse and face losses during the week due to market activity, as risk appetite might increase. Trade war tensions may momentarily ease, as United States President Trump and European Commission President Jean-Claude Juncker are set to meet on Wednesday to “focus on improving transatlantic trade and forging a strong economic partnership”. Furthermore, Friday sees the release of 2Q US GDP data which is expected to rise to 4.2%, potentially leading equities to rally.