Yen Strength And RBNZ: What To Expect

These days, all of the action in the forex market seems to be driven by the moves in Asia. On Tuesday night, the soared against all of the major currencies and held onto its strength throughout the London and NY trading sessions. Investors are buying yen because the Bank of Japan may be more inclined to tighten monetary policy than its previous actions suggested. The from the last BoJ meeting was released Tuesday night and according to the report, one member felt that a wider range for the long-term yield would be necessary, which is hawkish and resulted in Wednesday’s yen rally. The question now is whether the views of one policy maker could have a lasting impact on USD/JPY and the answer lies in yields and the . fell Wednesday but the yield curve is steepening, attracting demand back into Japan. If short- or long-term rates continue to rise, the yen should too. But if Japan’s curve flattens, then the yen could resume its slide. Although the yen shrugged off Tuesday night’s yuan weakness, China’s currency and its markets will be important to watch because big moves will have a direct impact on USD/JPY. In the near term, the pair is slowly moving lower but there’s a lot of support between 110.60 and 110.80. We finally get some U.S. data Thursday with scheduled for release. The stronger and recent decline in may have eased PPI growth and if that’s true, USD/JPY could test its support levels.

The immediate focus is on the Reserve Bank of New Zealand’s Wednesday night . Although the New Zealand dollar rose slightly ahead of the rate decision, in the grander scheme of things, is hovering at 2-year lows and is near 7-month highs. We believe the RBNZ will keep the door open for future easing. When it last met in June, it left interest rates unchanged, saying it is well positioned to manage a rate change in either direction. RBNZ also tweaked the wording of its slightly to suggest that it could change interest rates. The fact that NZD/USD dropped to a 2-year low following the announcement reflects the fear that the next move could be a rate cut. Unfortunately, New Zealand’s economy only worsened since then. is up but and confidence declined. Service and growth slowed significantly while the turned to a deficit. Inflation increased but are down. The only saving grace is the weakness of the New Zealand dollar. It helps to make NZD dairy more attractive on the global market and more affordable to Chinese importers who are grappling with yuan weakness. With that in mind, the lack of improvement in dairy prices and China’s troubles give the RBNZ very little reason to be optimistic. Having just tweaked the language in its monetary policy statement at its last meeting, RBNZ still wants the market to believe that a return to easing is possible. 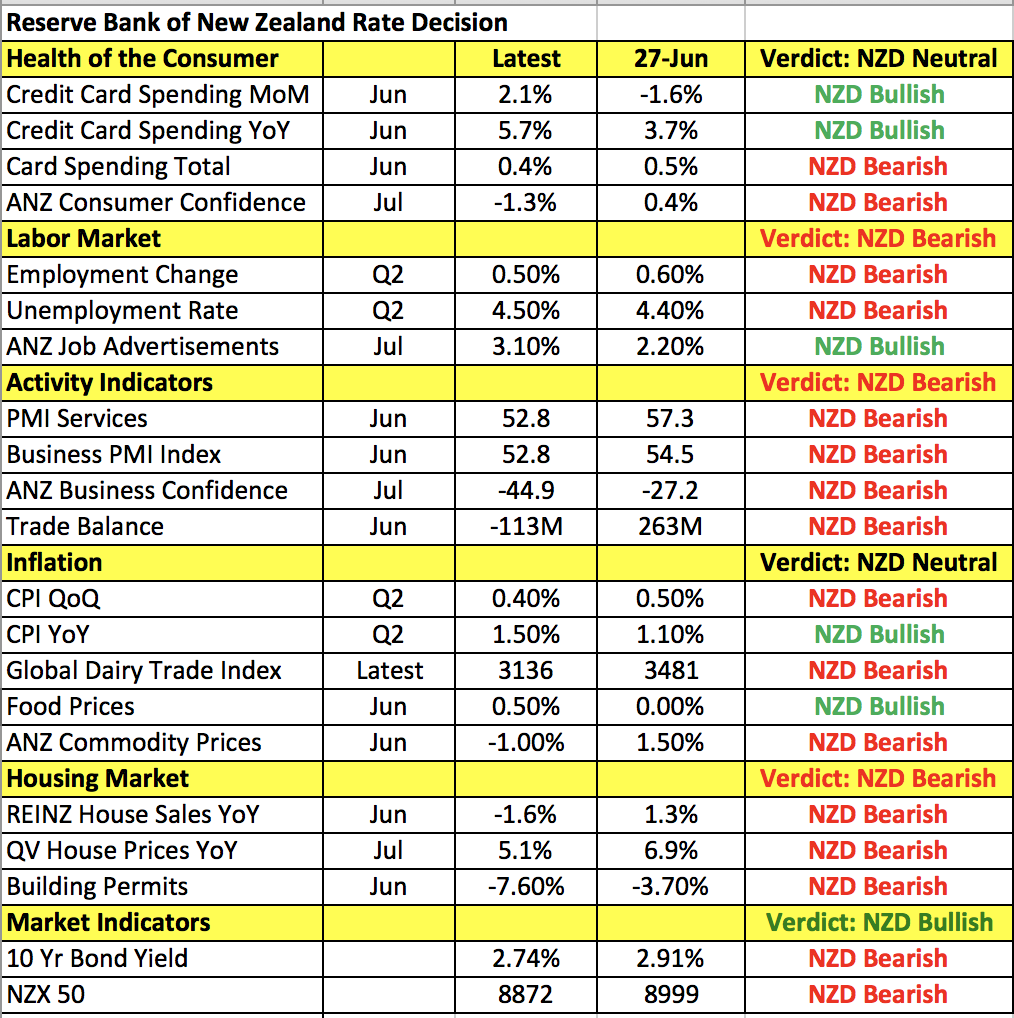 Both the and dollars shrugged off China’s mixed . Although the country’s trade surplus fell, and rose strongly. There’s still a lot of talk about more trade tariffs but for the time being, the Australian dollar is taking the risks in stride. Comments from RBA Governor Tuesday night were also optimistic. While he felt that an escalation of the trade war would be damaging for the world economy, he believes that the most likely scenario is for the economy to continue on its current track. Lowe is confident that inflation will get back to 2.5% and if the outlook stays favorable, he believes that the next will be up. With that in mind, he made it clear that there is no strong case for near-term adjustment in policy, which means RBA maintains a neutral policy for the time being.

For , on the other hand, 1.31 was broken almost as quickly as it was rejected. Data from Canada missed the mark with falling -2.3% and while this is not the most important Canadian economic report, it was catalyst that took USD/CAD to a high of 1.3120. However there’s a lot of resistance at 1.31 and with the market looking for the Bank of Canada to raise this year, the rally was met with sellers quickly. Yet if continue to fall, it will be difficult for the Canadian dollar to rally. Oil plunged 4% intraday to a 7-week low on the back of a smaller-than-expected drop in . China also threatened to impose 25% tariffs on U.S. goods that would include fuel oil, petroleum and diesel products. It is putting a lot of pressure on the U.S. energy sector having already imposed tariffs on U.S. crude and liquefied imports.

The ended the day unchanged while extended lower against the U.S. dollar for the seventh consecutive trading day. This divergent performance took to its highest level since October 2017. There was no specific news to drive sterling’s slide, but there’s no doubt that the market’s concerns about Brexit are growing. As noted by our colleague Boris Schlossberg, cable is “now trading on momentum as lack of news has emboldened the shorts to probe the lower edges of long-term support, but the trade in the pair is highly susceptible to headline risk, so any hint of compromise could quickly push it above the 1.3000 level in a furious short covering rally.” With no U.K. data on the calendar Thursday, momentum will continue to drive the currency’s flows.